FAS Will Seek $2.5 Billion in Its Portion of the Capital Campaign 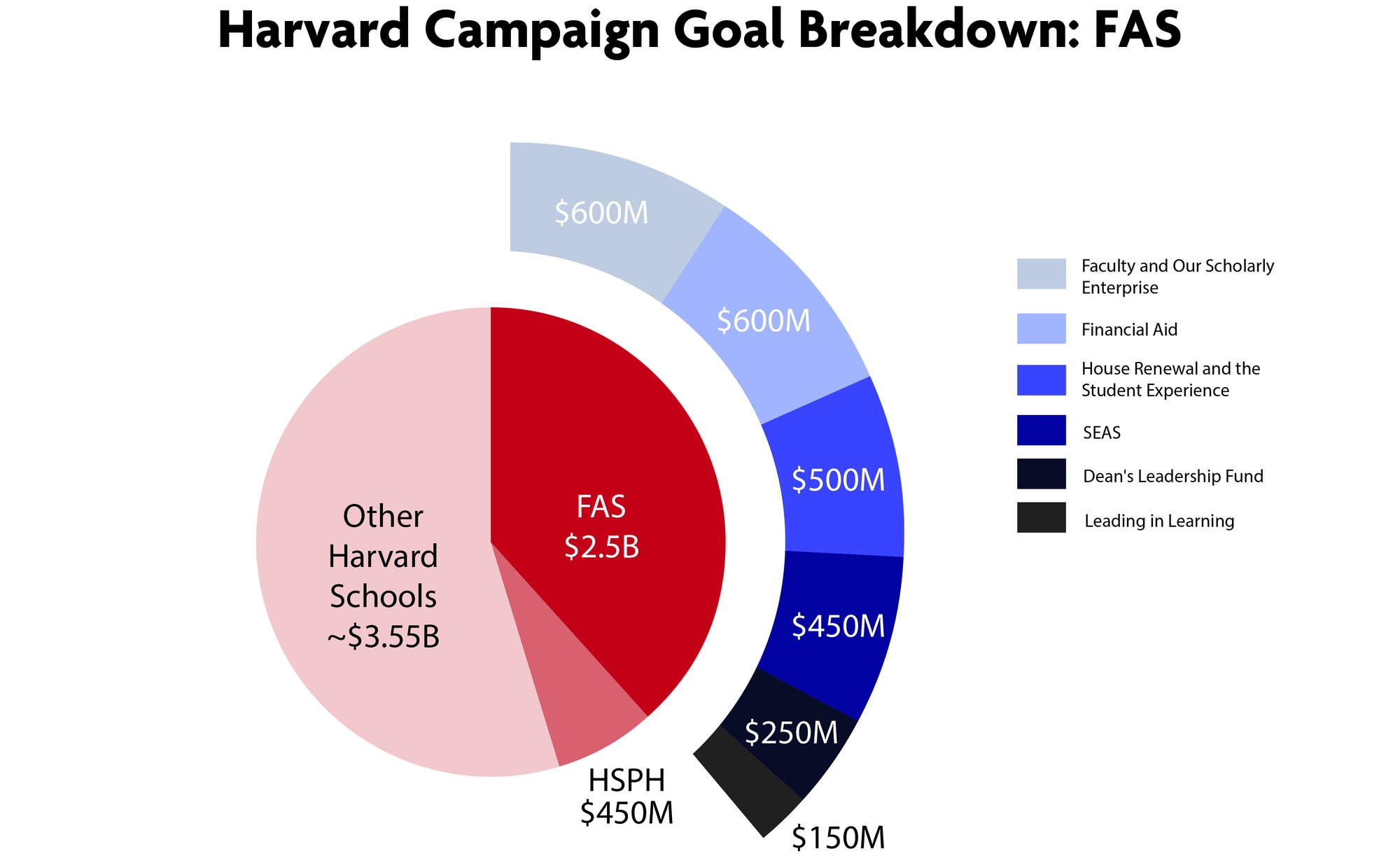 Note: The $450 million in funding allocated for the SEAS priority overlaps with that of other priorities.
By Matthew Q. Clarida and Nicholas P. Fandos, Crimson Staff Writers

Harvard’s Faculty of Arts and Sciences will seek to raise $2.5 billion in its portion of The Harvard Campaign, FAS campaign co-chair Carl J. Martignetti ’81 announced to hundreds of alumni, donors, and affiliates gathered at an official launch event Saturday morning in Sanders Theatre.

That goal, which comprises a little more than a third of the record-breaking $6.5 billion the University hopes to raise in the coming years, makes The Harvard Campaign for Arts and Sciences the largest subset of the overall fundraising effort.

Martignetti told the crowd that the campaign has already raised just over $1 billion to date from 93,000 individual gifts, meaning that the average gift has been almost $11,000.

“[The FAS goal] is very ambitious by any measure,” Martignetti said. “[The future] is right there for the taking, at our fingertips—the chance to move Harvard to a whole other level, a whole other place.”

Reflecting on FAS’s educational mission in the morning’s keynote address, FAS Dean Michael D. Smith told attendees that in the face of disruptive technology, the personal exchange of ideas must remain paramount to the Harvard experience. To that end, Smith said that the FAS campaign’s six priorities—Financial Aid, House Renewal and the Student Experience, Leading in Learning, Faculty and Our Scholarly Enterprise, the School of Engineering and Applied Sciences, and the Dean’s Leadership Fund—represent “our heritage and our future.”

Each priority, he said, “has a simple concept at its heart: making sure Harvard continues as a place of discovery for people leading positive change in the world—scientists and scholars, poets and entrepreneurs.”

The campaign launch comes at a critical time for FAS. In the Dean’s Annual Report for academic year 2012-2013, which was released to faculty earlier this month, both Smith and Dean for Administration and Finance Leslie A. Kirwan ’79 said that FAS has yet to fully recover from the damage inflicted by the financial crisis. Both administrators said that the body was looking towards the campaign as a source of sustainability for FAS.

“Our priorities are clear and urgent,” Smith said Saturday, adding later, “Our campaign makes the bet that place still matters, especially this unique place. We believe in the power of the chance meetings that occur every day across this campus. We believe in the power of direct engagement. People impact one another in truly profound ways—that is a truth across time.”

Though it remains the largest piece of the University’s total goal, FAS’s proportion of the overall funds has dipped slightly since the last University-wide campaign, which ran from 1994-1999. During that campaign, FAS was projected to account for a little more than 46 percent of total funds raised, compared to an expected 38 percent today. The 1990s campaign ultimately raised $1.1 billion for FAS.

In her own remarks Saturday, University President Drew G. Faust emphasized the centrality of FAS to the University’s mission and campaign, arguing that the body represents not only the Harvard’s history but the engine that drives it forward.

“What we do here is about more than helping our students along a path they have defined for themselves,” Faust said. “In many ways, this campaign asks of us what we ask of our students: reach higher, dream bigger, and raise our sights even higher.”

After the event in Sanders, donors and other guests could choose to attend any one of a series of symposia hosted by faculty and administrators across campus. Topics for the symposia included residential life, financial aid, and digital education, among others. This weekend’s attendees were also invited to eat lunch in the Science Center Plaza, and then to attend the football game against Princeton.

The weekend began with an invitation-only dinner Friday evening for donors and campaign organizers inside a heated tent in the Science Center Plaza.

Campaign planners were expecting roughly 1,000 alumni, administrators, donors, and other University affiliates to be in attendance for this weekend’s festivities, far more than the few hundred that were on hand for the University-wide launch Sept. 21.

This weekend’s celebration in Cambridge comes just two days after Harvard School of Public Health announced at a gala in downtown Boston that it will seek to raise $450 million in its own fundraising drive. At the launch, which was attended by supporters of the school, HSPH campaign co-chair Jonathan S. Lavine said that HSPH had already raised $167 million toward its goal.

Other schools across the University are expected to roll out their own campaigns in the coming months.

An earlier version of this article incorrectly stated that Harvard’s FAS campaign will fund the House renewal project’s full estimated pricetag of more than $1 billion. In fact, campaign funds are only expected to pay for $400 million of House renewal.