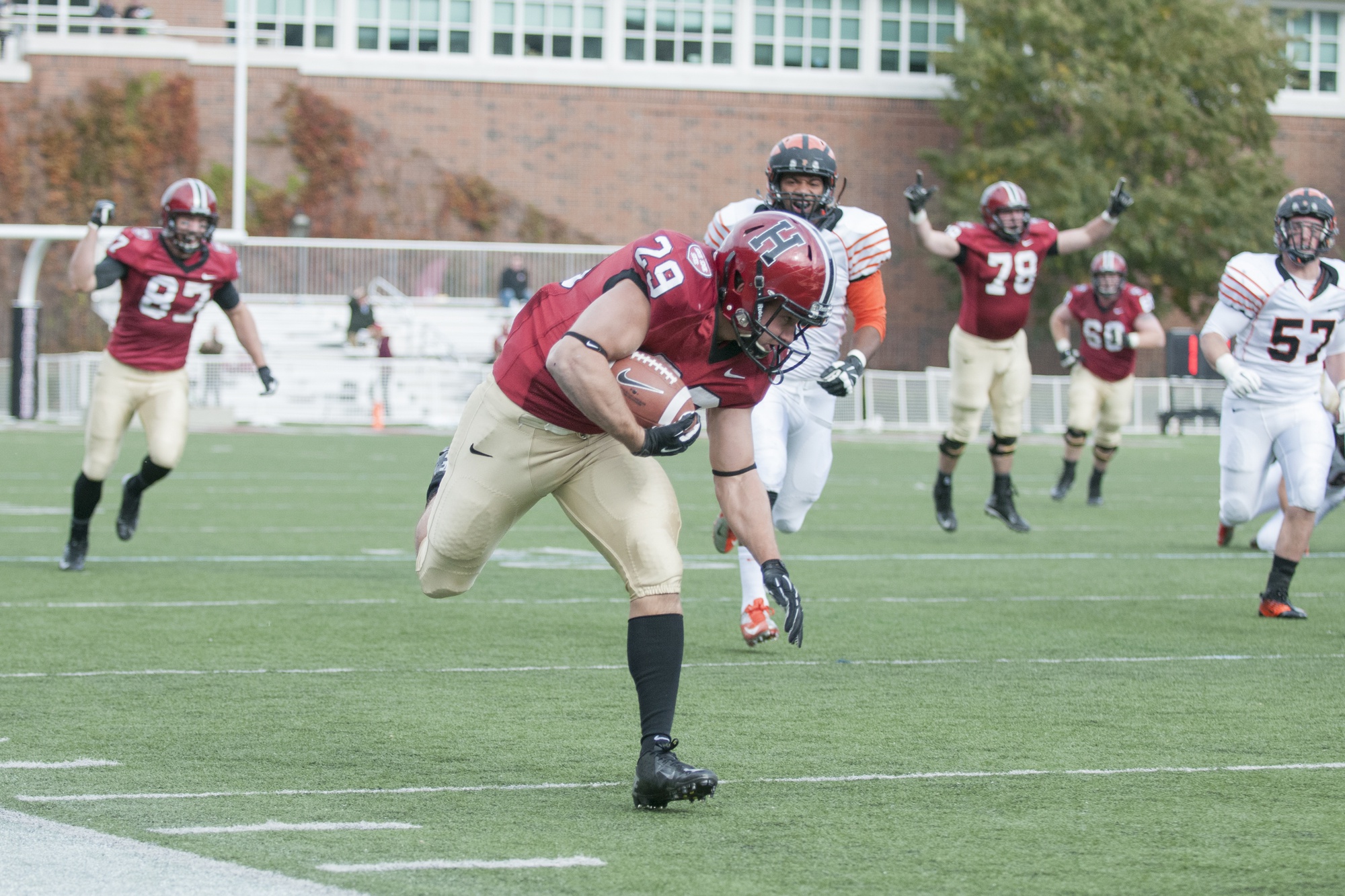 Sophomore running back Paul Stanton kept his balance and sprinted 60 yards for a touchdown that briefly gave the Harvard football team the lead Saturday versus Princeton. Stanton finished with 12 carries and 91 yards in the triple overtime loss.
By Samantha Lin, Crimson Staff Writer

One year later, the duo would connect again to beat Harvard, but this time, Epperly would need three overtime periods to pull out another victory. After trading touchdowns, and then field goals, in the first two overtimes, the Princeton defense forced the Crimson to settle for a field goal. On the Tigers’ ensuing possession, Epperly found Wilson at the back of the end zone for the game-winning score.

"Roman was actually my second option, and he made it one heck of a play,” Epperly said.

The Crimson (5-1, 2-1 Ivy), led by junior quarterback Conner Hempel, back at the helm after missing two weeks due to injury, attempted to orchestrate another comeback after trailing the Tigers for much of the game, but it was to no avail as Princeton (5-1, 3-0 Ivy) triumphed again, 51-48, on Saturday at Harvard Stadium.

“We struggled at times on both sides of the ball, and it wasn’t a work of art, but our kids played so hard that we willed the thing to overtime,” Harvard coach Tim Murphy said. “In the end, they just made one more play that won the game.”

At the end of the third quarter, Harvard suffered a huge loss when senior center David Leopard went down with the score tied at 28.

“He’s an All-Ivy caliber center,” Murphy said. “[Senior left guard] Nick Easton did a tremendous job [replacing him] under the circumstances, but he’s never played the position before in a game.”

The loss of Leopard weakened an already injury-riddled offensive line, which had given up five sacks even before the veteran center went down.

Two plays after Leopard left the game, Hempel scrambled out of a collapsing pocket, but a swarming Tiger defense knocked the ball loose and fell on top of it. The ensuing drive saw Princeton move down the field and regain the lead, 35-28, as Epperly hit receiver Seth DeValve in the end zone.

On a crucial drive with six minutes left and trailing, 35-28, linebacker Mike Zeuli came barreling through the line and sacked Hempel to set up third and 21. On the next play, Hempel threw up a long pass that was picked off by corner Jacoby Johnson.

But then the defense, which had stepped up in the second half and forced three consecutive Princeton punts, answered the call again. Senior cornerback Brian Owusu punched the ball out of DiAndre Atwater’s hands, and senior safety Jaron Wilson scooped it up and returned it to the Princeton 19 yard line. Hempel connected with senior tight end Tyler Ott three plays later to tie the game, 35-all.

“We knew we needed a big play down the stretch. There wasn’t a lot of time left, so as a defense we take it upon ourselves to create turnovers,” Owusu said. “The opportunity presented itself today.... We were just giving the offense the best chance to make plays themselves.”

The defense came up with another stop on the next drive to give the offense the ball back with 1:42 remaining in regulation, but false start penalties backed Harvard up, forcing backup kicker sophomore Andrew Flesher to attempt a 50-yard field goal, which missed wide left to bring up overtime.

Epperly, who faced little pressure from a depleted defensive unit that had lost linebacker Connor Sheehan last week, torched the secondary with 321 yards and six scores with no picks. Hempel, in contrast, was sacked seven times and threw two interceptions along with 307 yards and four touchdowns.

Penalties, which have troubled Harvard all season, became a problem again on Saturday. The Crimson tallied 11 penalties for 79 yards, including the two which put Flesher’s would-be game-winning field goal out of reach.

Harvard’s red zone became a familiar place for the Princeton offense in the first quarter. Within the first 15 minutes, the Tigers found themselves inside the 20-yard line on three separate occasions—every one of their first-quarter drives.

On the first drive of the game, Epperly drove Princeton down 75 yards for the first score. A missed two-point conversion gave the Tigers the early 6-0 lead just three minutes into the game.

The Crimson defense appeared to have gotten a stop on Princeton’s following drive, but a Harvard defender ran into the punter, extending the Tigers’ drive. Princeton moved all the way down to the one on the drive, but the defense came up with a goal-line stand.

When Harvard’s offense couldn’t capitalize on the turnover, the ensuing field position in Harvard territory led to another seven points for the Tigers.

But once the second quarter began, the momentum shifted. The Crimson scored 14 unanswered points to take the lead on sophomore Paul Stanton’s longest run of the year, a 60-yard sprint to the end zone that gave Harvard a 14-13 lead.

A costly mistake by Hempel led to another Princeton score. Under pressure, Hempel threw a free-for-all that defensive back Philip Bhaya plucked out of the air. Two minutes later, Princeton turned the mistake into eight points, as Epperly hit receiver Conner Kelley for a score and converted the two points afterward.