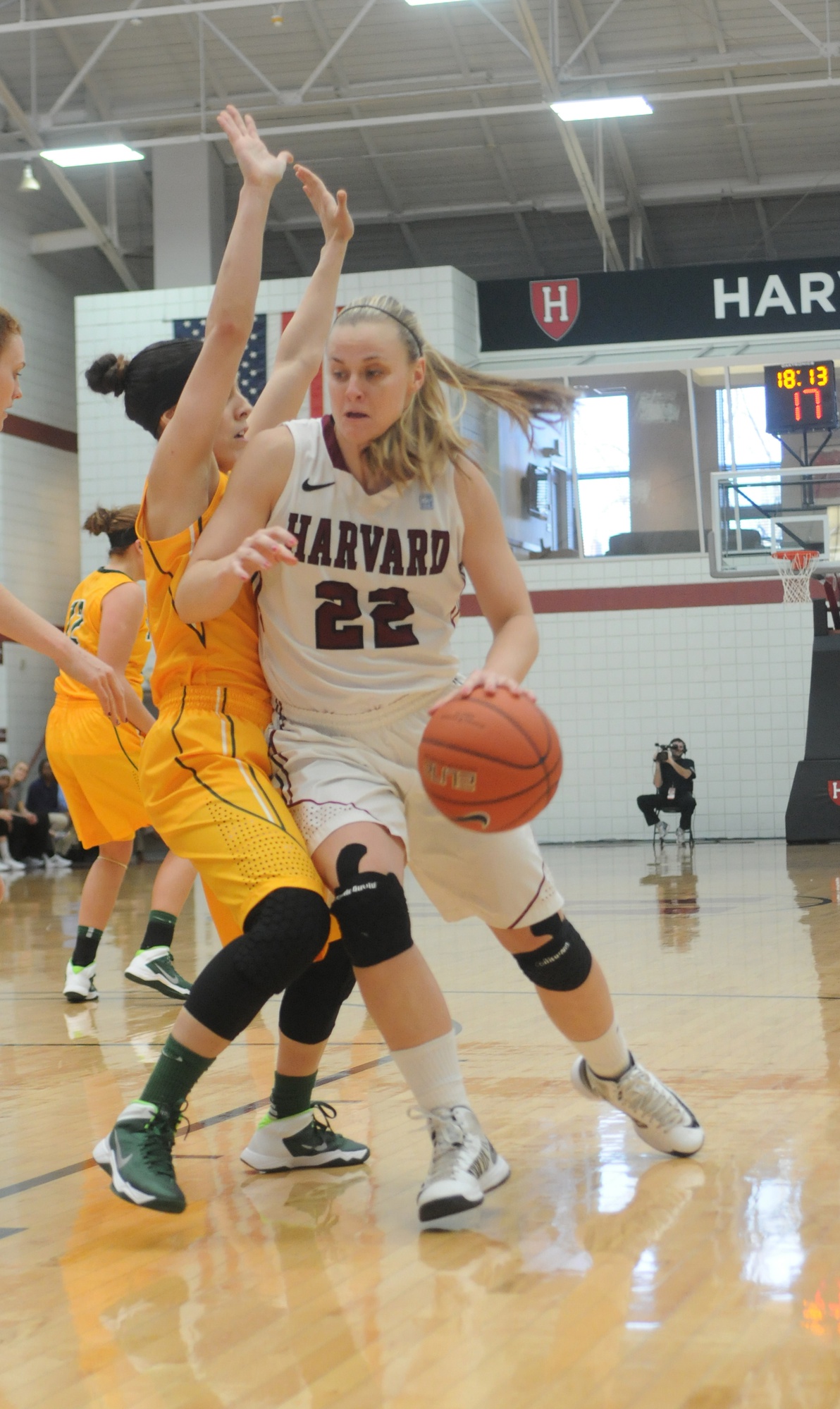 After season opening contests that saw the Crimson struggle to play a full 40 minutes, Harvard (3-1) finally put the pieces together for both halves as coach Kathy Delaney-Smith’s squad dismantled the Bison (1-2), 84-56, on Saturday at Lavietes Pavilion. The Crimson is now ranked No. 25 in the CollegeInsider.com Women’s Mid-Major Top-25 poll.

“[Playing a full 40 minutes] is the MO we are trying to establish, which led me to great disappointment in the BU game,” Delaney-Smith said. “We knew that and so the conversation was something like, ‘You get a second chance now. Can you sustain two halves of basketball?’ Yes, we did that.”

Co-captain Christine Clark, who had a game-high 21 points, powered the first half with 15 points in the first 20 minutes. Clark was part of an offensive scheme, comprised of senior guards Elise Gordon and Melissa Mullins along with junior forward Temi Fagbenle, which dominated in the paint and out-rebounded NDSU by twice as many boards in the first half, 32 to 16.

Rebounding has been an Achilles’ heel for the Crimson, having been beaten on the boards in two of the three previous games this season. Mullins was essential in that respect, providing a game-high 10 rebounds, trailed closely by Gordon, who came off the bench to chip in eight rebounds and 10 points. Fagbenle was also a consistent low post presence, with seven boards and eight points, mostly from mid-range jumpers.

“I’m hoping that we can grow to continue to do those kind of tacks in the paint after ball movement,” Delaney-Smith said. “I thought today was our best day so far moving the ball, opening it up a little and then getting in the paint.”

Defensive rebounding was key to shutting down the Bison offense, where top scorers Brooke LeMar and Marena Whittle were held to team-high scores of 13 and 11 points, respectively. NDSU shot at 33.8 percent overall, and was under 30 percent through the first frame.

“You can never take North Dakota State lightly in spite of them losing their first couple of games,” Delaney-Smith said. “[Harvard’s win] had nothing to do with them and everything to do with us. I feel my team is capable of certain goals defensively, and if they work hard at it, they can achieve them. It is more about us working together as a team to shut down these players.”

Harvard also excelled at holding onto possessions, turning the ball over just six times. The figure is a low for Harvard since any of the players on the roster joined the team. The Bison nabbed just two steals through the fixture.

“It was just making sure that we were patient and going through the offense, rotating the ball and making sure we see open cutters,” sophomore Shilpa Tummala said. “[We were] making the right passes with a lot of patience.”

Tummala contributed eight of a total 33 points from the bench. The 5’11” guard converted two of four three-point attempts and doled out three assists. Tummala provided power and accuracy at the perimeter that was, by and large, absent until the second half of the contest.

“I think my coaches and teammates always instill a lot of confidence in me,” Tummala said. “I try to do what they tell me to do. Kathy pulled me aside at half-time and said that she didn’t care if my shot went in or out, that I needed to focus on defense and rebounding first. I think similarly I tried to focus on defense and rebounding and my shot just fell.”

Tummala was instrumental in a second-half offense that saw the Crimson stretch a half-time lead of 19 points to 28 by the game’s end. Ten members of the team scored along the way.

“What we did really well was communicate, and that was lacking in the BU game,” Tummala said. “We did a good job talking on defense, which helped our offense. It was our talk and our hustle that soared the momentum on offense.”

While Harvard has scored more than 75 points in each contest this season, the game was its highest scoring affair since notching 88 points in a win against Dartmouth during the 2012-13 Ivy League opener back in January. Saturday’s drubbing takes revenge for NDSU taking last year’s season opener, 81-72, in the first-ever meeting between the two teams.

—Staff writer Cordelia F. Mendez can be reached at cordelia.mendez@thecrimson.com.