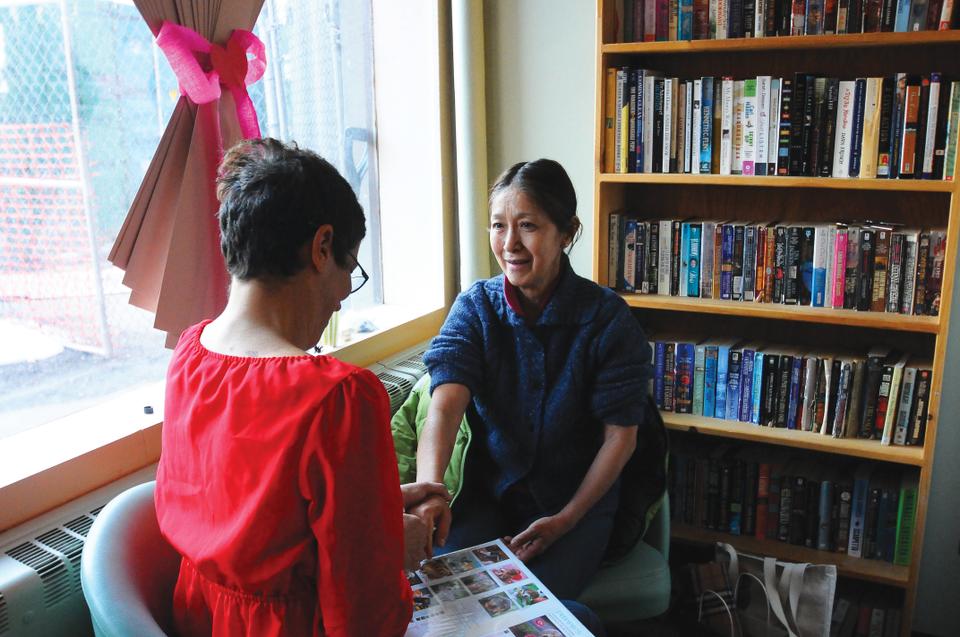 Women of all ages and walks of life painted nails, gave each other massages and henna tattoos, and shared life stories—including some about love—throughout the three-hour event, which has become a cherished tradition at the YWCA shelter.

The program was founded in 2003 by former Quincy House Master Jayne Loader, who, along with Dunster House Master Ann Porter, took two bags of collected cosmetics from the Harvard community to the YWCA the week before Valentine’s day that year. “Jayne’s reasoning was, ‘What could be worse than running from an abusive spouse, at a shelter, on Valentine’s day, without a date?’” said Robert M. Gogan, Harvard’s associate manager for recycling services.

Harvard’s Office for Sustainability began spearheading the collection of nail polish, hair treatments, shampoos, perfumes, colognes, soaps, makeup and other toiletries in the month leading up to Valentine’s Day. They increased their efforts after observing large numbers of unused cosmetics in the trash during spring moveout, said Gogan.

The drive has grown from a couple of bags of cosmetics to one ton of donations. These are divided into gift bags for each of the more than 100 women who live permanently in the Tanner Residence of the YWCA Family Shelter.

This year, Loader returned for the 10th anniversary of the drive to drop off donations at the YWCA. The interns and employees of the shelter team up with members of Harvard’s Resource Efficiency Program to decorate the shelter with pink streamers and glitter and provide refreshments for the women who come to receive the donations.

“[It] was just great to be with the women,” said Schuyler S. Engel, case manager of the Tanner House. “Women who live here have all had amazing lives.”

Linda K. King, a resident of the shelter, said that the volunteers “really make a big effort to do something really pleasant” and described the event as “sort of like a cocktail party.” Another resident, Yoko Hershiki, said that the afternoon made her feel loved.

“When I walk into the building, there is so much warmth,” Hershiki said of the event’s atmosphere. “This is about love; love between friends, between neighbors. It’s about girls getting together.”

As residents picked their way through baskets of varying shades of lipstick, trying to find ones that would suit them best, they reminisced about family and past relationships.

“When I get thinner and get my mobility back, men better watch out,” said King.

For many of the residents, the real benefit of the event had nothing to do with material goods. “It’s nice to know that people care about this place, the YWCA,” said Hershiki. “People care about us, about everybody, black or white, young or old, it doesn’t matter. It’s just love and it’s in this room.”