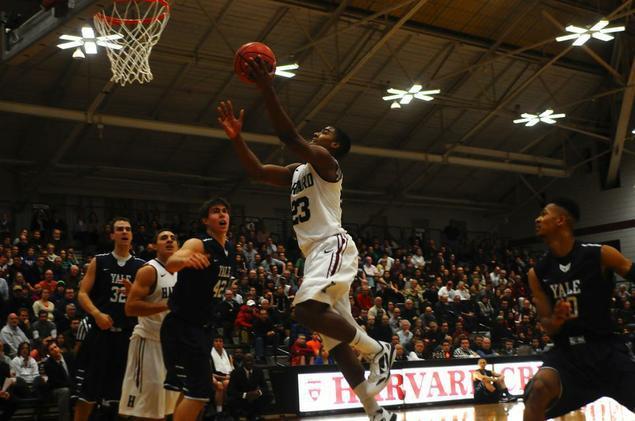 Wesley Saunders, pictured in earlier action, and his team will face off against the University of New Mexico in Salt Lake City on Thursday. The game will mark Harvard's second NCAA tournament appearance in the past two years.
By Martin Kessler, Crimson Staff Writer

The Harvard men’s basketball team will face the University of New Mexico Thursday in Salt Lake City in its NCAA tournament opener.

The 14-seeded Crimson learned its fate at a gathering of Harvard fans at the Murr Center’s Hall of History Sunday afternoon.

“Obviously we’re incredibly excited and thrilled to see our school’s name come up on that screen,” Crimson coach Tommy Amaker said moments after the tournament field was announced. “We’re proud to represent our conference and our institution.”

After a 66-year drought, the Crimson will appear in the NCAA tournament for the second straight season. Harvard will look to improve upon last season’s 79-70 loss to Vanderbilt, but the Crimson (19-9, 11-3 Ivy) will have its hands full with the 29-5 Lobos. New Mexico, which is coming off a victory over UNLV in the Mountain West championship, has won nine of its last 10 matchups and ended the regular reason ranked No. 15 in the AP poll.

The Crimson and Lobos have shared just one opponent this season—UConn. New Mexico topped the Huskies, 66-60, on Nov. 19 at the Paradise Jam, an annual tournament played in the Virgin Islands. Less than a month later, UConn defeated the Crimson, 57-49.

“With the shorter week, things will have to kick in very quickly for us,” Amaker said. “Get information, get films, and scouting reports, and see if we can start preparing for what we think we’ll see.”

If the Crimson were to defeat the Lobos, Harvard would face either Arizona (25-7) or Belmont (26-6) in the tournament’s third round on Saturday, also in Salt Lake City.

Others teams competing in Salt Lake City will be No. 1 Gonzaga, No. 8 Pittsburgh, No. 9 Wichita St., and No. 16 Southern University. The games will be played in Energy Solutions Arena, home of the NBA’s Utah Jazz.