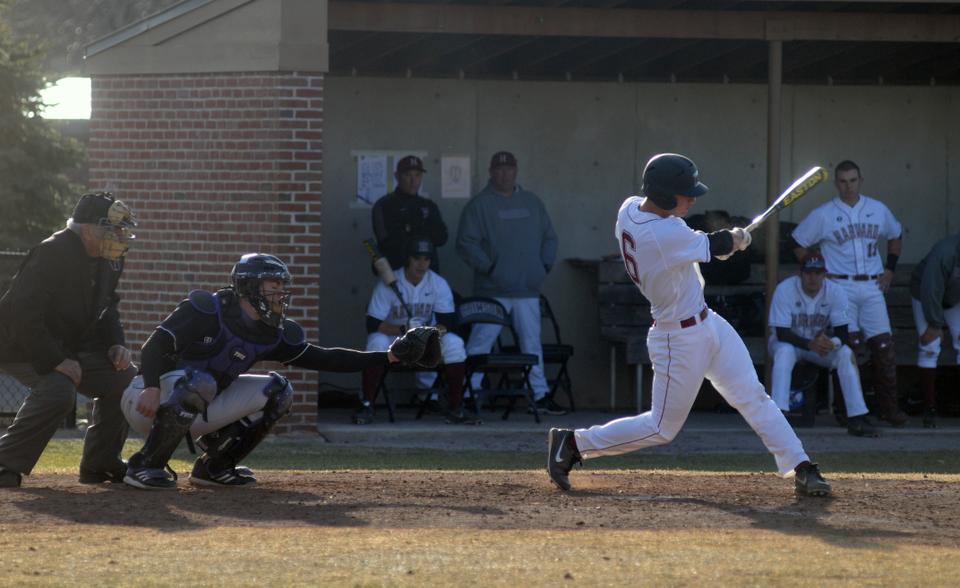 Freshman second baseman Mitch Klug has been part of a very productive Class of 2016 for Harvard baseball
By Alexander Koenig, Crimson Staff Writer

When freshmen Mitch Klug, DJ Link, and Sean Poppen formally committed to Harvard in the spring of 2012, they thought they had a pretty good idea of what they were getting into.

The Crimson’s beloved coach Joe Walsh, who had recruited them and the rest of their teammates, was coming back for his 18th season, and despite a 12-30 (8-12 Ivy) record in 2011-12, Harvard was bringing back seven of its top eight batters and the bulk of its rotation. There was reason for optimism in Cambridge.

But over the summer, Walsh, 58, passed away and was replaced by former Trinity coach Bill Decker.

“At first it was just shock; you don’t really know how to react,” Poppen says.

The fall saw several more losses for the team as eight upperclassmen left before the season opened on Mar. 1. Harvard was left with just three batters who had more than 90 at-bats the previous season and only three pitchers with more than 20 innings on the hill.

Suddenly, Klug, Link, Poppen, and the Crimson baseball program were left with a lot of uncertainty.

“I really can’t say I had any idea what my role was going to be,” Klug says. “Especially with the new coaching staff and all the circumstances, I’m not sure if any of us really knew.”

Through 18 non-conference games, Klug, Link, and Poppen have planted themselves firmly in the starting lineup at second base, catcher, and pitcher, respectively. Klug and Link trail only sophomore outfielder Brandon Kregel in plate appearances. Poppen leads Harvard in innings pitched and has started three games, including a complete-game three-hitter against Houston Baptist.

“I think [the wins against Houston Baptist] showed that we’ve got a couple young kids that have grown up in a hurry,” Decker says. “Due to our current situation, those kids were forced into these larger roles, and that’s going to give them good experience.”

Though Walsh’s presence will be difficult to replace, the trio of freshmen have done a good job at helping the Crimson (3-15) forget about the lost production from the absent members of last year’s team. At this point last season, Harvard was 1-17, having lost the opening 17 games of the year.

The Crimson bounced back to avoid last place in the Red Rolfe division. But if Harvard is to improve upon last year’s Ivy League performance, it will need consistent production from the three rookies and the rest of their 10-man class.

With Link leading the team in RBIs (eight), Klug second on the team in runs (six), and Poppen boasting a team-best 3.92 ERA, it can be easy to forget that just a year ago they were all still in high school.

“From a physical standpoint, [the hardest thing] is that everyone is bigger and stronger [in college],” Link says. “Everyone playing college baseball was big at their high school. They were all one of ‘those guys.’”

Klug, Link, and Poppen certainly were “those guys” for their high schools in Missouri, New Jersey, and Virginia, respectively. Klug was all-state in football at wide receiver and led his St. Louis University High School baseball team to a No. 7 national ranking. Link was all-state at Seton Hall Prep and was recruited by defending Ivy League champion Cornell. Poppen topped them both by throwing a no-hitter in the Virginia state championship game his senior year.

But, as Link pointed out, the college ranks are full of players with comparable, if not better, resumes. At this level, the freshmen can no longer get by on talent alone.

“In high school, we were able to get away with pulling an outside pitch or bobbling a ground ball and still throwing a guy out at first, but at this level you can’t do that,” Klug says. “You have to focus on every play.”

At times, lapses of focus have cost the rookies and the Crimson. In addition to his spectacular outing against Houston Baptist, Poppen was victimized by Rice, giving up seven hits and nine runs in five innings in a 12-0 Harvard loss. Likewise, Link has had four multi-hit games this season, tied for tops on the team with Klug, but has also failed to get on base in five games, all Harvard losses.

“Everything feels really professional,” Poppen says. “Every day you go in and have to get your work done, and you get better by the end of every day. Last year, some of my friends went off to college to pitch and some of them were saying, ‘Yeah, a lot of what pitching is you pitch, you run, you field fly balls for guys batting, and there’s a lot of downtime,’ and I’m not getting a lot of that.”

Helping the freshmen adjust to the increased athletic workload, not to mention the academic one, is a group of upperclassmen that have welcomed the Class of 2016 from day one.

“The older guys on the team are great - we love ’em,” Link says. “They did a really good job assimilating the freshmen with them and making us feel [like we were] part of the team, and we appreciate that.”

Still, the large freshman class has its own identity, and a confidence that the best is still to come for Harvard baseball.

“I feel like the freshmen really stick together; it’s one team but the freshmen eat lunch together [and] dinner together all the time,” Link says. “We’re always in Annenberg together; there’s definitely camaraderie between all the freshmen. We know we’re a great team if we play fundamentally sound baseball. We just have to do it every day.”