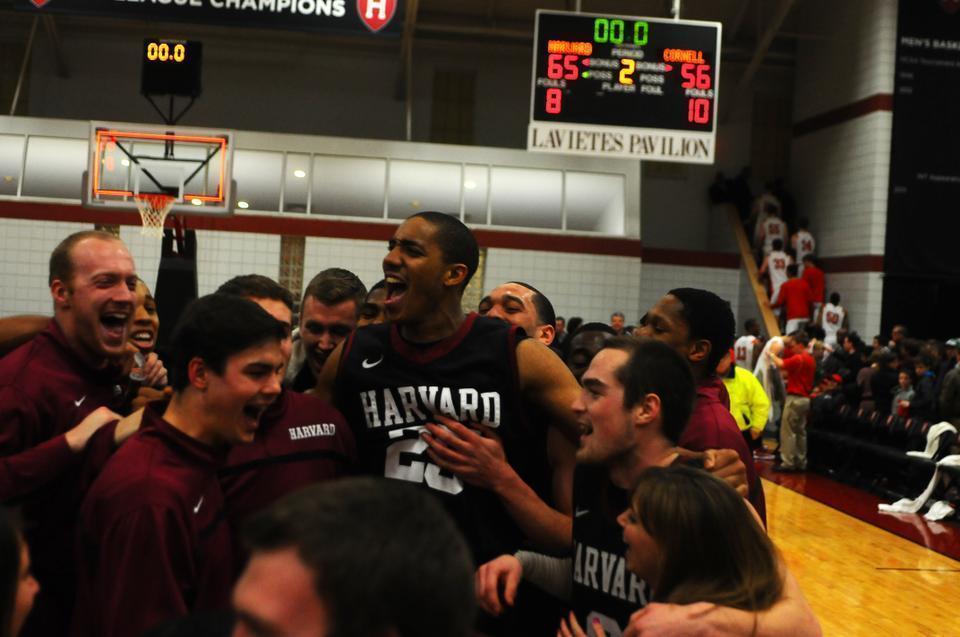 After a regular season of breakouts and busts, comebacks and collapses, and departure and development, the Harvard men’s basketball team has finished on top.

With a 65-56 win over Cornell Saturday night at Lavietes Pavilion, the Crimson clinched its third consecutive Ivy title, and with some help from Brown—which beat Princeton, 80-67—Harvard is headed to the NCAA Tournament for the second straight season.

The Crimson (19-9, 11-3 Ivy) entered the night needing a win to clinch a share of the championship, and a Tigers loss in one of its two final games—Saturday at Brown or Tuesday at Penn—to win the title outright.

It got the help it needed on Saturday, when the Bears stunningly upset Princeton in Providence.

“Just how we drew it up,” co-captain Christian Webster joked. “I’m just thankful. This is crazy.”

Of course, before Harvard could worry about the rest of the league, it had to take care of business on its home court against the Big Red (13-18, 5-9).

And following a season of dramatic finishes, it was only fitting that the final contest came down to the wire.

After trailing by 14 with nine minutes to go in the second half, Cornell cut the Harvard lead to five with 1:35 remaining. But Miles Asajo-Adjei missed a jumper that would have made it a one-possession game, and sophomore Wesley Saunders, junior co-captain Laurent Rivard, and freshman Siyani Chambers knocked down six of eight free throws in the final moments to ice the championship and begin the celebration as the student section stormed the court.

“What a victory of our kids, and what a weekend for our program,” Crimson coach Tommy Amaker said. “I can’t say enough how proud I am of our guys.”

The Crimson’s third championship was its most unexpected. After a season began with the departures of co-captains Kyle Casey and Brandyn Curry, the Crimson withstood its toughest non-conference schedule yet and maintained a lead through league play until last weekend, when a sweep by Princeton and Penn put Harvard a game back of the Tigers.

“We were obviously very dejected and down after that two-loss weekend,” Amaker said. “[But] we said that we have it play this out and see how it shakes out.”

It played out well for the Crimson, which took care of business at home this weekend, while the Tigers were shockingly swept to send the Crimson to the dance.

“We never gave up, and anything can happen in this league,” Rivard said.

On Saturday, Harvard went into the half up eight and stretched its lead to 13 when Chambers hit a long three from the top of the key. Errick Peck answered back with a layup for a Cornell, but Rivard—who led all scorers with 17 points—answered back with a left-wing long ball to push the advantage to 14.

From there, Cornell began chipping away and got within seven with 4:28 remaining on an Asafo-Adjai layup and then within five on two Peck free throws.

But Harvard, after nearly blowing a 21-point second-half lead in Ithaca on Feb. 8, was able to hang on Saturday night for its third straight title.

“For me it’s definitely the sweetest one out of the three,” said Webster, the winningest player in Harvard history. “I couldn’t ask for anything more.”

The Crimson came out of the gate hot and opened up a 19-13 advantage midway through the first half after a longball by Rivard, who tied the program record for three-pointers in a season during the contest.

But Cornell—which stalled at the top of the key to run the play clock down on many of its first-half possessions—fought back to tie the game with a 6-0 run.

“I thought that in all honesty given the personnel problems that they have suffered recently that it was a terrific strategy,” Amaker said. “[Cornell coach Bill Courtney] was trying to shorten the game.”

After an Asafo-Adjai layup tied the game at 23, sophomore Steve Moundou-Missi knocked down two free throws, Saunders found the forward underneath for a reverse layup, and Rivard drilled a three from the right wing to put Harvard up seven.

Peck—the focus of a Big Red offense that was missing its best player, sophomore Shonn Miller, as well as starters Johnathan Gray and Devin Cherry—was fouled on a drive with 5.6 seconds remaining before the break. He went to the line and hit his first free throw, but missed the second, and Chambers went coast-to-coast against the Cornell defense for a layup at the buzzer to extend Harvard’s lead to eight.

“I think we ended the half well,” Amaker said. “That was a critical stretch of the game for us.”

After pulling away in the second, Harvard became the ninth team since the Ivy League’s inception in 1946 to win three straight league titles.

“We may not have had what we what we had [at the beginning of the season], but we believed that we had enough, and we stayed with that theme,” Amaker said. “To be here right now—what a moment.”