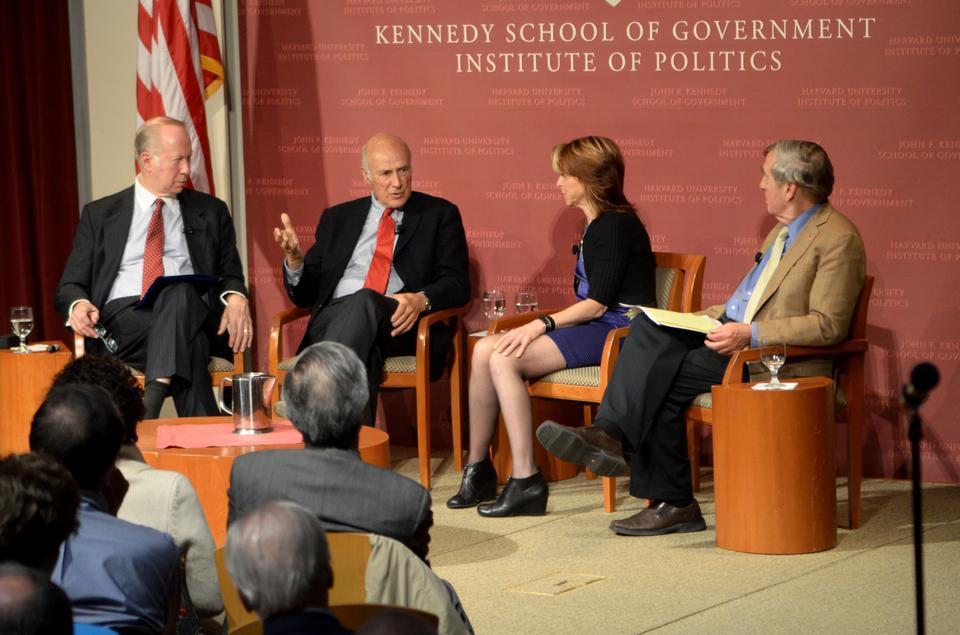 Co-Director of the Center for Public Leadership David Gergen moderates a conversation with Director of the Belfer Center of Science and International Affairs Graham Allison, Harvard Business School Professor of Business Administration Nancy F. Koehn and Harvard Kennedy School University Distinguished Service Professor Joseph S. Ny, Jr. on the Presidential Leadership and the Rise of American Power. The panelists discussed the history of the American presidency, reaction to crises and the nature of leadership itself.
By Dennis O. Ojogho, Contributing Writer

Members of the Harvard community convened in the John F. Kennedy Jr. Forum Wednesday evening for a panel discussion on presidential leadership.

Nye himself participated in the discussion, along with Professors Nancy F. Koehn, Graham T. Allison ’62, and David Gergen, who moderated the event.

The event began with a broad, unanswered question: “Does it really matter who leaders are, or is history ultimately defined by the structure of the times that they are born into?”

As members of the audience pondered this question, the four professors entertained various counterfactuals in an effort to dissect the question.

“If Kennedy had been killed by Oswald two years earlier, we would have gone through the missile crisis with Johnson as president and would have most likely gone to war,” Allison said.

While Allison’s statement highlighted the importance of a single leader on the course of history, Koehn later stressed that presidential leadership is as much a function of structure as it is about individual agency.

“Structure and agency both create history. It is both the time and the person,” Koehn said. “Franklin Roosevelt was very constrained in the mid 30s and he didn’t know much about foreign policy. Only with Pearl Harbor could he put his foot on the pedal.”

Nye agreed that both the individual and the moment are important. He compared George Bush Sr.’s presidency to that of his son, referring to the elder Bush as having a high level of “contextual intelligence” because of the way he handled the Dissolution of the Soviet Union. On the other hand, Nye claimed, younger Bush lacked the contextual intelligence to properly carry out his mission in the Middle East.

Toward the end of the panel discussion, Koehn shared an experience she had in her lecture in light of Monday’s Boston Marathon attack.

Three students in her class, all of them of Middle Eastern origin, spoke about thousands of people who had been killed by terrorists attacks in their home countries in the past week.

Koehn said that these students’ stories made her realize the need for leadership that is redemptive.

She added that the solution lies in the realization that human suffering around the world is universal.

“I wait for Barack Obama or some of our other leaders to, as Abraham Lincoln did, call us to the better angels of our nature,” Koehn said before a thunderous applause from the audience.