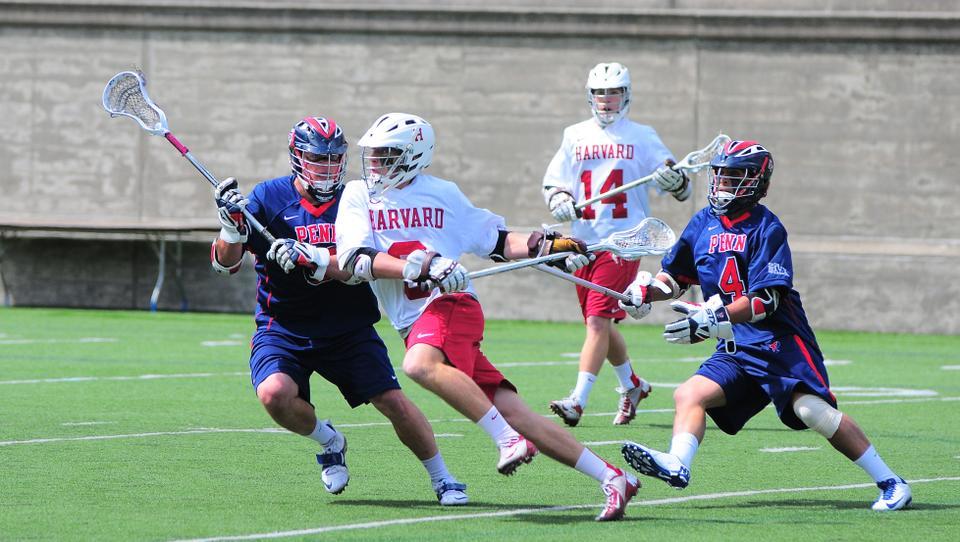 The Harvard men's lacrosse team, pictured in earlier action, suffered a defeat at the hands of Duke on Saturday.
By James M. Acer, Crimson Staff Writer

Coming off of a strong performance against No. 18 Penn last Saturday, the Harvard men’s lacrosse team entered its Friday night matchup at No. 12/13 Princeton with a chance to solidify its place in the postseason Ivy League Tournament. The Tigers (8-4, 3-2 Ivy), however, had other plans, as they led the Crimson (6-7, 2-3) from start to finish en route to a 14-6 victory.

Princeton jumped out to a quick 3-0 lead midway through the first quarter. Harvard cut the margin to two by the end of the frame, but the Tigers took hold of the game from there.

A dominant second quarter pushed the Crimson deficit to five goals and Princeton continued to pour it on in the third period. By the end of that frame, seven unanswered goals left Harvard in what would be an insurmountable 12-3 hole.

“We came out flat,” Crimson coach Chris Wojcik ’96 said. “It was a disappointment, definitely…. We weren’t the team we have been in the last four or five games.”

The loss drops Harvard to a tie for fourth in the Ivy League. The Crimson still controls its postseason destiny, however, and can guarantee a spot in the four-team Ivy Tournament field with a win against No. 15/12 Yale next Saturday.

Junior attackman Carl Zimmerman scored two goals to lead a Harvard offense that struggled for much of the game. Freshman attackman Devin Dwyer and senior midfielder Alex White each recorded one goal and one assist for the Crimson.

Freshman midfielder Jake Froccaro led the way for the Tigers with five points, scoring three goals and assisting on two others. He was just one of three Princeton players to record hat tricks on the night, as sophomore attackman Mike MacDonald tallied four goals and sophomore midfielder Kip Orban scored three times and recorded an assist.

“You have to give credit to Princeton,” Wojcik said. “They are a very good team and they showed it [Friday].”

Harvard’s offense struggled for much of the game, seeming to take a step back from the momentum it had built in its recent strong performances.

“I think we were tight in the beginning,” Zimmerman said. “On offense we were throwing the ball away. We took some bad shots. That continued through our offensive possessions.”

The Crimson turned the ball over 17 times on the night and registered just 23 shots in contrast to the Tigers’ 45.

Harvard showed brief signs of life early in the game, scoring twice in the final 90 seconds of the first quarter. Zimmerman took a pass from freshman attackman Ian Ardey and found the back of the net just before the whistle blew to bring the Crimson within two.

But Princeton responded with a clinic over the next two periods.

Harvard was held scoreless in both frames while the Tigers continued to pad its growing lead. Froccaro, MacDonald, and Orban each scored in the second quarter to push the lead to 8-3, and the same trio combined for four goals in the third quarter, putting the game out of the Crimson’s reach with the final frame still to be played.

“Overall it was a bad team effort,” Zimmerman said. “The only good thing about this is that it’s just one game. We just need to get back to what we do best. We’d been playing well in our last few games—our offense has been clicking and our defense has been incredible. We have to get back to that.”

That mindset will be critical for Harvard moving forward. The Crimson would have locked up its spot in the Ivy League Tournament field with a win on Friday, but its fate now comes down to its regular season finale next Saturday—a home match-up with rival Yale. While a win will send Harvard into the postseason, a loss would mean the prospect of missing the tournament in consecutive seasons.

“Our backs are up against the wall,” Wojcik said. “The next week is going to show us what we’re made of as a team.”