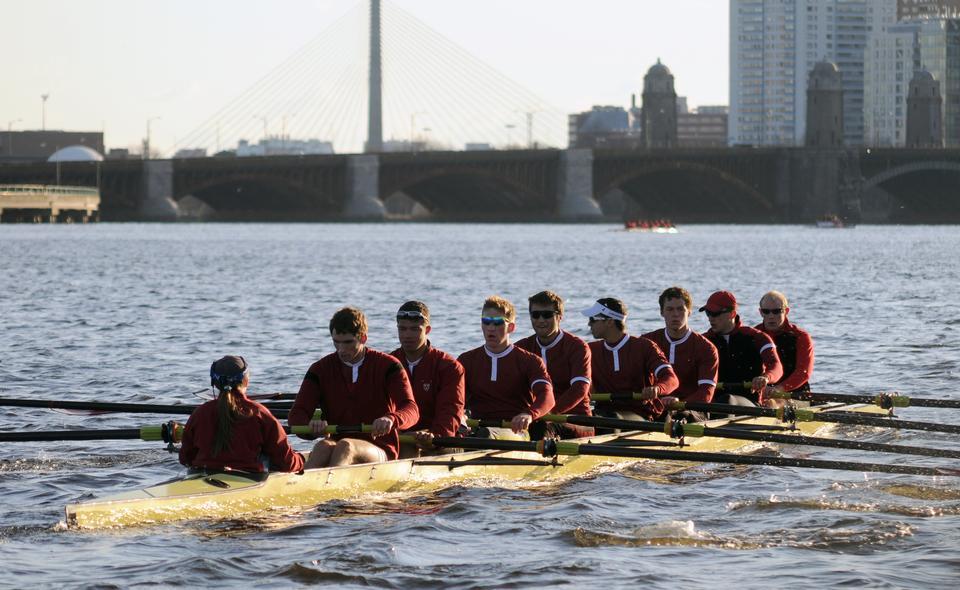 After defeating the No. 3 Brown heavyweights last week, the Harvard heavyweights moved up to No. 2 in the national rankings. The Crimson kept up its winning ways against Princeton while the No. 1 lightweights extended their own winning streak, defeating Navy on the Charles River.
By Alexa N. Gellman, Crimson Staff Writer

The Harvard heavyweights raced Princeton under calm conditions to win their seventh-straight Compton Cup title on Sunday morning. The competition was originally scheduled for Saturday morning, but, due to Friday’s lockdown and the difficulties it posed for traveling, the matchup was postponed to Sunday. MIT was expected to compete, but was ultimately unable to attend due to the schedule change.

“We had to wait 24 hours, but our heads were all in the right place,” said senior Justin Mundt, stroke of the second varsity boat. “We were up and ready to race.”

The Crimson’s first varsity eight finished in 6:03.3, defeating the Tigers by a margin of 3.4 seconds. In another close contest, Harvard’s second varsity boat fell to Princeton by 3.3 seconds.

“I thought it was a good row from our guys [Sunday] morning,” Mundt said. “It was a very strong crew from Princeton so credit to them for rowing a good race. We didn’t get the rhythm we hoped to, but it was a solid row and we are looking forward to our next races.”

The Crimson’s first freshman boat defeated the Tigers by a considerable margin, completing the course in 6:26.4. The third varsity race went to the Princeton crew, which finished in 6:35.3.

Harvard will race at home on the Charles River next weekend against Penn and Navy for the Adams cup.

“We expect some really good racing,” Mundt said. “Both crews usually come out really strong against us.”

The race came the morning after the Boston-area lockdown was lifted. Friday’s weigh-in was cancelled, and the crew did not know whether it was going to race until late Friday night. But the Crimson responded well to the uncertainty surrounding the competition.

“All of us are very scheduled about the way we make weight and it’s the same every time,” lightweight captain Erich Shultze said. “To have that in limbo and up in the air over the course of the day can be taxing on our guys… but, all our guys are tough mentally and were ready to go. They adapted really well to the situation.”

In addition, the Crimson faced difficult weather conditions on the Charles River on Saturday morning.

“The conditions were really rough which definitely played a part [in dictating the racing],” Shultze said. “I think all of our boats took longer than usual to find their rhythms. But, I think we are all very pleased with the way the race went. It’s always tough to beat Navy, so we are definitely happy with the race results.”

In the first varsity race, Harvard pulled ahead in the second half of the course to finish in 6:44.3, defeating Navy by 10.5 seconds. The second varsity race was also a close contest, with the Crimson completing the course in 6:41.6, 9.2 seconds ahead of the Midshipmen.

“It was really tight in both races to the 1,000-meter mark,” Schultze said. “Both races played out similarly in that in the third 500 we started to really find rhythm and pull away. In the second varsity we had a really great sprint and were able to move away as the race progressed.”

The Harvard freshman boat also recorded a win in 6:44.9. The third varsity race went to Navy, which defeated the Crimson by a margin of 12.6 seconds.

Harvard will face Yale and Princeton next weekend in the annual Harvard-Yale-Princeton Regatta, one of the most historic and challenging competitions of the season for the Crimson.

“It’s definitely going to be a fast race with a lot of good guys on the start line, so we are looking forward to it,” Schultze said.