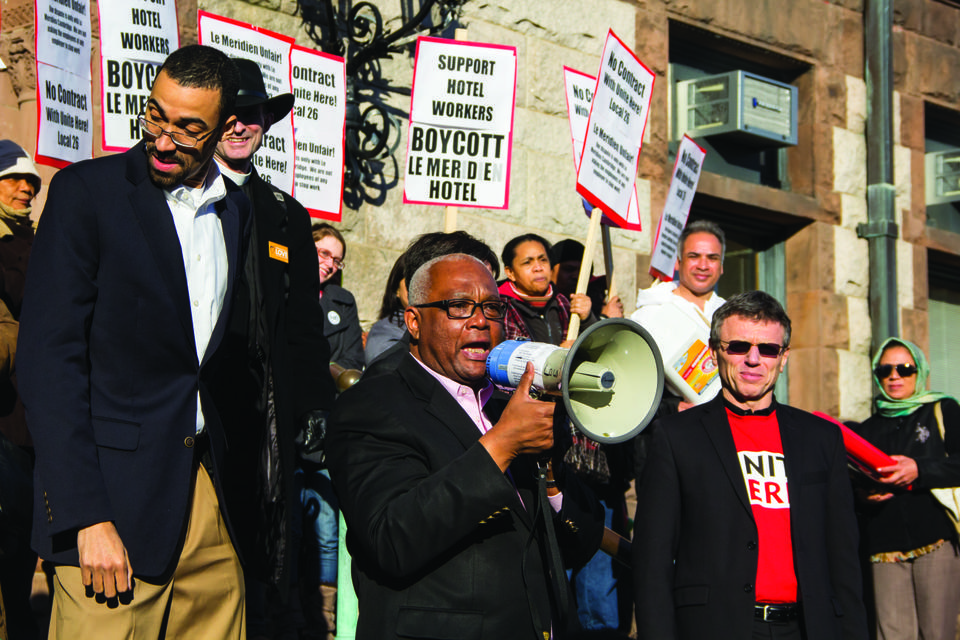 Cambridge City Council member Kenneth E. Reeves speaks out in support for the workers of Le Meridien Hotel. Harvard students joined the protest in front of Cambridge City Hall in support of allowing the workers at the hotel to join a union.
By David W. Kaufman, Crimson Staff Writer

Hotel workers, activists, and students gathered in front of Cambridge City Hall Thursday afternoon to protest what they characterized as unfair labor practices at the Le Méridien hotel in Cambridge.

Brandishing inflatable clapper sticks, signs, and drums, the protesters, who included Harvard undergraduates, chanted “No Justice, No Peace” in between delivered speeches.

According to organizers, employees at Le Méridien have been seeking a path to unionization for more than a year, but have been blocked by the hotel’s owner, HEI Hotels & Resorts. HEI, which uses investments from university endowments and other funding sources to buy, streamline, and resell hotels, has faced repeated allegations of failure to comply with labor regulations.

Harvard announced in spring 2012 that it would join several of its peer institutions, including Yale, Princeton, and Brown, in deciding not to reinvest in funds managed by HEI. Harvard Management Company President and CEO Jane L. Mendillo indicated at the time that the decision not to reinvest was rooted in “factors related to the HMC portfolio and its strategy and needs,” rather than as a response to criticism of HEI’s labor practices.

On Thursday, a year after Harvard’s move, protesters said their work in supporting HEI employees is far from finished.

“The HEI fight has been a long fight,” said Alex L. Chen ’16, a Student Labor Action Movement member who attended the protest.

Although the Le Méridien workers themselves are not unionized, the protest was organized by UNITE HERE! Local 26, a labor union that represents workers throughout Massachusetts, including Harvard’s dining hall workers.

Bob Boudreau, an employee of Le Méridien, was one of many who expressed his dissatisfaction at the hotel’s response to recent unionization attempts. He noted that Le Méridien employees wanted both an “agreement for neutrality on the part of the hotel” and “an agreement that they won’t appeal the decision” once provided with a path to unionization.

SLAM member Gabriel H. Bayard ’15 said he was pleasantly surprised by the turnout to the event, which organizers estimated at more than 400 people.

“The response has been overwhelmingly positive,” Bayard said.

Protesting students said they saw the rally as a small part of a greater struggle for hospitality workers’ rights throughout Boston and Cambridge. Some attendees called on Harvard to actively support the Le Méridien workers as they seek unionization.

“The Cambridge City Council already backs the boycott,” said Chen, referencing a unanimous vote in October 2012 that resulted in the city of Cambridge boycotting all services provided by Le Méridien. “Harvard should do the same.”

Attendee Matthew E. Stolz ’14 said that the organizers’ “bigger project” was working to help employees of the Harvard-owned DoubleTree Suites by Hilton Hotel Boston as they, too, consider unionization.

Last month, DoubleTree workers declared that they would start the process of considering unionization and demanded that Harvard grant them fair process to make that decision.