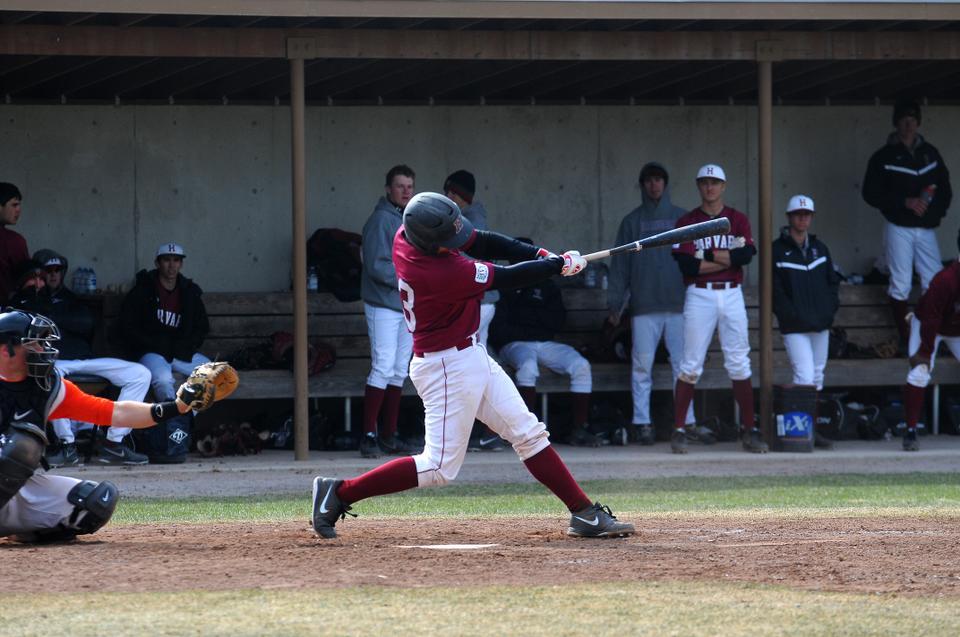 Freshman catcher D.J. Link provided clutch hitting and solid play behind the plate all weekend for the Crimson. The rookie went 9-for-14 with four RBIs, including two in the crucial bottom of the seventh inning in the second game of Saturday’s doubleheader against defending champion Cornell.
By Alexander Koenig, Crimson Staff Writer

Timely hitting with runners in scoring position has not been Harvard baseball’s forte this season. But down four in the bottom of the seventh in the second game of Saturday’s doubleheader against defending Ivy League champion Cornell, the Crimson’s bats got hot and a little help from Big Red defensive errors sparked a seven-run inning that gave Harvard the win, 10-7.

“To win like this, to erupt with some offense and show that we can swing the bats—there are a lot of positives to make us excited about going forward,” co-captain Jordan Haviland said.

The 10 runs were the most the Crimson (6-21, 3-5 Ivy) has put together in a single game this season. Prior to Saturday’s late-game success Harvard was averaging just 2.5 runs per game.

Sophomore right-hander Matt Timoney took the mound for Harvard, and kept Cornell in check in the early-goings, allowing just one hit through two innings. With the Crimson up 1-0, Harvard was cruising. But in the top of the third inning, Big Red slugger Chris Cruz knocked a homer out of the yard with two men on, giving Cornell a lead to build on. The Big Red scored two runs in each of the next two innings, and after a scoreless sixth inning entered the seventh up 7-3.

Freshman catcher DJ Link led off the inning with a walk. The rookie went 3-for-4 at the plate with three RBI and currently leads the Crimson with 12 RBI on the year. Junior Jeff Hajdin grounded out to the pitcher and Link advanced to second. Cornell pitcher TJ Parthemer walked the next two batters to load the bases and bring sophomore outfielder Brandon Kregel to the plate.

Kregel drove in Link, keeping the bases loaded and prompting a pitching change. New Cornell pitcher Eric Upton (1-1) came in in relief and, after giving up a single to sophomore Nick Saathof, who brought the score to 7-5, struck out sophomore Tanner Anderson for the second out of the inning. But the Crimson rally was not done there.

“In the bottom of the seventh we really pulled together and racked up some runs, got a lot of energy, a lot of positive energy, that we didn’t see much of in the beginning of the game,” junior pitcher Baron Davis said. “The guys stepped up, and we got it together at the end.”

Junior Carlton Bailey singled to short and beat out the throw, driving in freshman third baseman Mitch Klug and re-loading the bases once again. Co-captain Rob Wineski forced a throwing error from the second baseman, bringing home an unearned run. That brought Link back up to the plate, as Harvard batted through the order for the first time all season.

Link singled to right, driving in two more and putting runners on first and third. Hajdin came up to bat and reached on an error from third base, bringing Wineski home and putting the finishing touch on the inning.

Davis (2-2) logged three innings of work, giving up two hits and two earned to get his team-leading second win of the season. Haviland came in to close out the game, giving up one hit in two scoreless innings and earning his second save.

The Big Red threatened in the top of the eighth as Haviland faced runners on first and second with one out. But the Crimson’s luck was not out yet. Haviland threw a ball to bring the count to 3-2 on Cornell batter JD Whetsel. Whetsel incorrectly thought it was ball four and started walking towards first as the runners began advancing as well. After some confusion and impassioned yelling from the dugouts, Harvard tagged out a runner to get Haviland out of a jam.

“I’ve never seen that kind of thing happen before,” Haviland said. “But obviously we’ll take it.”

The first game of the double-header was dominated by Cornell pitcher Nick Buston (4-0) who pitched a complete-game five-hitter while striking out seven to give the Big Red a 3-1 victory. A fourth-inning two-run double from Cornell outfielder Conor McCabe proved to be the difference. Harvard managed to get four runners on base—including two in the bottom of the seventh—but could not bring anyone around to get back into contention.

Despite the clear skies, weather played a large role in both games, with cold temperatures and balls getting lost in the sun contributing to occasionally sloppy play.

“I think on cold days like this, it comes down to who wants it more,” Haviland said. “[In the second game] we battled the elements better, and we know this field and we know how to play hard on it.”