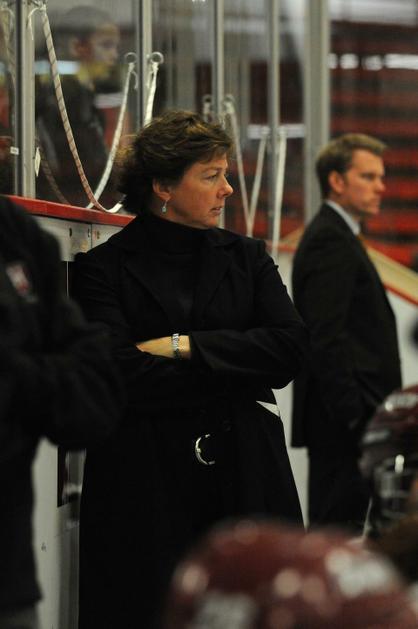 Harvard women's hockey coach Katey Stone led the US National Team in the 2014 Olympics in Russia, then returned to lead the Crimson to the NCAA Frozen Four.
By Daniel A. Grafstein, Crimson Staff Writer

When the Harvard women’s hockey team takes to the ice this upcoming October, something will be different.

Crimson coach Katey Stone, the winningest coach in Division I history, is headed overseas. She will take with her the 402 Division I wins, six ECAC championships, and one national championship she has earned in 19 seasons at the helm for the Crimson when she goes.

“It’s hard to imagine Harvard hockey without coach,” co-captain Jillian Dempsey said. “She’s the best at what she does."

With Dempsey graduating this spring, a whole new crop will usher in the new era in Harvard hockey.

“One of the main reasons I came to this school to play is because [Stone] is an awesome coach,” freshman goaltender Emerance Maschmeyer said of her coach. “But I am extremely confident in [interim head coach Maura] Crowell and [assistant coach Haley] Moore.”

Crowell was announced as the interim coach this week after Stone’s decision  to coach the U.S. Olympic Squad next year.

“It’s a great opportunity for her,” Stone said. “She has earned it and I think she will do a great job."

After Crowell got a job with her prep school out of college, she landed at UMass Boston, where she became the winningest coach in the Division III school’s history.

While there, Crowell set a program record for wins in a season, ranked second among all ECAC East coaches in winning percentage, and had several successful playoff campaigns including a pair of semifinals appearances.

The newly named interim head coach arrived at Harvard in 2009 as an assistant after attending a coaching symposium that brought her and coach Stone’s staffs together.

In her capacity as an assistant, Crowell has maintained a strong connection with both the head coach and the players.

“[Coach Stone] has been a great mentor for the past 30 years,” Crowell said. “She allows me to do a lot within the program and learn a lot.”

In Crowell’s mind these connections are facilitated by shared beliefs.

“Part of the reason we work so well together is that we value very similar things,” Crowell said. “Hard work is always going to be at the heart of Harvard hockey.”

The concept of team has been made especially salient for this season’s group of girls. On road trips, Stone would always have her squad bring signs reading “Team First.”

“You realize how much of a mentality and mindset it is,” Dempsey said. “There is no other program in the country that has that team aspect.”

This past season the Crimson reached the NCAA quarterfinals, falling just short of its fourth Frozen Four under Stone’s direction. Crowell hopes to continue the Crimson’s current trajectory.

“I know how Katie would want things to go and I just plan to continue it,” Crowell said.

But assuming Stone’s place behind the bench will be no easy task.

Stone always had a knack for leading. By the time her senior year rolled around, the Connecticut native was captain of both the hockey and lacrosse teams at the University of New Hampshire.

At Harvard, Stone jumped right into the mix learning the head coaching position with no experience with college hockey whatsoever.

After a couple of losing seasons, Stone shocked the women’s college hockey world, going 33-1 with a team that recorded a losing record just a season earlier.

Thirteen seasons later, the Crimson has yet to register another losing season.

But it wasn’t Stone’s impressive pedigree, wealth of experience, or tactical decision-making that made her special in the eyes of her players.

“What sticks out to me is coach at the board during practice drawing up drills,” Dempsey said. “It’s those type of everyday moments. She is always excited to be there."

“She protects us and will do anything for every one of us,” Maschmeyer added. “So it’s a pretty great feeling having a coach like that.”

When Stone coaches in 2014 Olympics in Sochi, Russia, she will make history, becoming the first woman to hold the post since women’s hockey became an Olympic sport in 1998.

“It’s pretty amazing,” Dempsey said. “I think it is a big step forward for a woman to hold a leadership position like that.”

Stone will also be among a small contingent of Harvard coaches to travel with Olympic teams at one point in time.

“It’s hard to imagine that our coach here at Harvard is going to be the Olympic coach,” Dempsey said. “But they definitely have the right person for the job.”

This winter should be a fun one in Cambridge as Stone enters the next phase of her career and the Crimson attempts to navigate uncharted territories.

“It’s going to be weird,” Stone said when asked if it has hit her that she is not going to be back next year. “But it’s going to be great. I am looking forward to [coach Crowell]’s taking the job.”