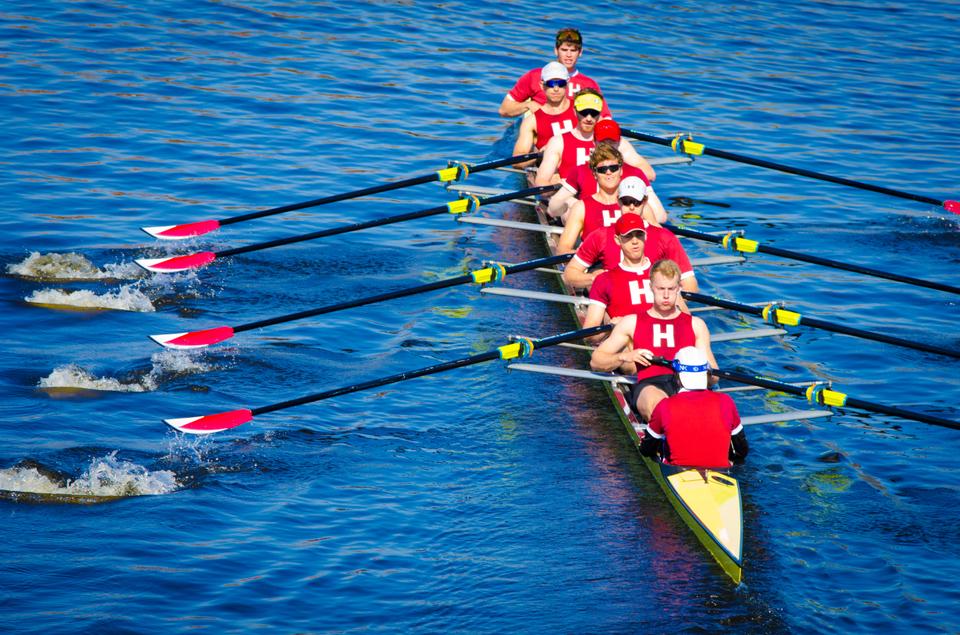 Both the Harvard heavyweight and lightweight crews dominated the spring dual season, posting undefeated records against their competitors.

However, despite the Crimson’s success so far, the most challenging and meaningful competition of the season still lies ahead at IRA Nationals that begin on Friday.

The Harvard heavyweights began their dual season by racing Cornell at home on the Charles River.  The Crimson posted a solid result by taking three of four races from the Big Red.

Harvard’s fiercest competition came in the following two regattas, where they faced Ivy League competitors Brown and Princeton. Although the Crimson won three of its five races against the Bears, both the first and second varsity races were very closely contested. While the first varsity race for the Stein Cup fell in Harvard’s favor, the margin of victory was just over a second.

The Crimson’s April 20 race against Princeton and MIT was postponed by one day due to the Boston Marathon bombing, MIT shooting, and resulting lockdown in the area. The Engineers were unable to travel to attend the rescheduled race in Princeton, N.J., so Harvard faced the Tigers alone. The uncertainty surrounding the Crimson’s race against Princeton added another difficult obstacle to the competition that the Crimson faced from its scheduled foes.

“I think mentally the guys were in a really good place,” said senior Justin Mundt, following the Princeton race on April 21. “We had to wait 24 hours, but our heads were all in the right place. We were up and ready to race.”

While Harvard’s first varsity boat defeated the Tigers by a considerable margin of about three seconds, the Crimson second varsity boat was overtaken for the first time all season.

“It was a very strong crew from Princeton, so credit to them for rowing a good race,” Mundt said. “We didn’t get the rhythm we hoped to, but it was a solid row.”

On April 27, Harvard won three races against Penn and Navy to capture the Adams Cup for the 14th straight year.  The following weekend, the Crimson swept Northeastern in four races and collected its 16th straight Smith Cup with a win in the first varsity race.

The Harvard heavyweights face remaining contests at IRA National Championships on May 31 and at the 148th annual Harvard-Yale Regatta on June 9.

The No. 1 Harvard lightweights had a strong start to their dual season with a decisive win over Delaware at home on the Charles River. The Crimson took three of five races from the Blue Hens and outpaced them in the first varsity race by a margin of 16.5 seconds.

“I think it was one of the best first races of the season we’ve had, at least in my time at Harvard,” senior Austin Meyer said.

Harvard continued its positive momentum into the following weekend, when the Crimson faced a double-header of two separate regattas in the two-day span. The Crimson first traveled to Philadelphia and took three of five races against Cornell and Penn. Then Harvard traveled to Princeton, where it swept Georgetown in four races.

“Our league is still competitive because everyone is the same size,” captain Erich Schultze said. “Any time you win a race, you can’t take that for granted.  Winning races is what we set out to do at the end of the year, and anytime you can get a win, it’s a good weekend.”

On April 13, the Crimson once again took all four races against Dartmouth, and the first varsity extended its undefeated streak to recapture the Biglin Bowl. The following weekend, Harvard dominated Navy in three of four races in what was the first sporting event in the Boston area following the lockdown.

The Crimson then competed in its most challenging and historic race of the spring season: the Harvard-Yale-Princeton Regatta.  The Crimson won the first varsity race for the fourth straight year and recorded wins in three of the four remaining contests.

“I definitely think that this crew has the focus and the potential to be the best crew in Harvard lightweight history,” Meyer said following the Delaware season opener.

With its dominant record so far, the Crimson has lived up to its potential and No. 1 ranking.  The Harvard lightweights will still face tough competition at IRA National Championships on May 31.