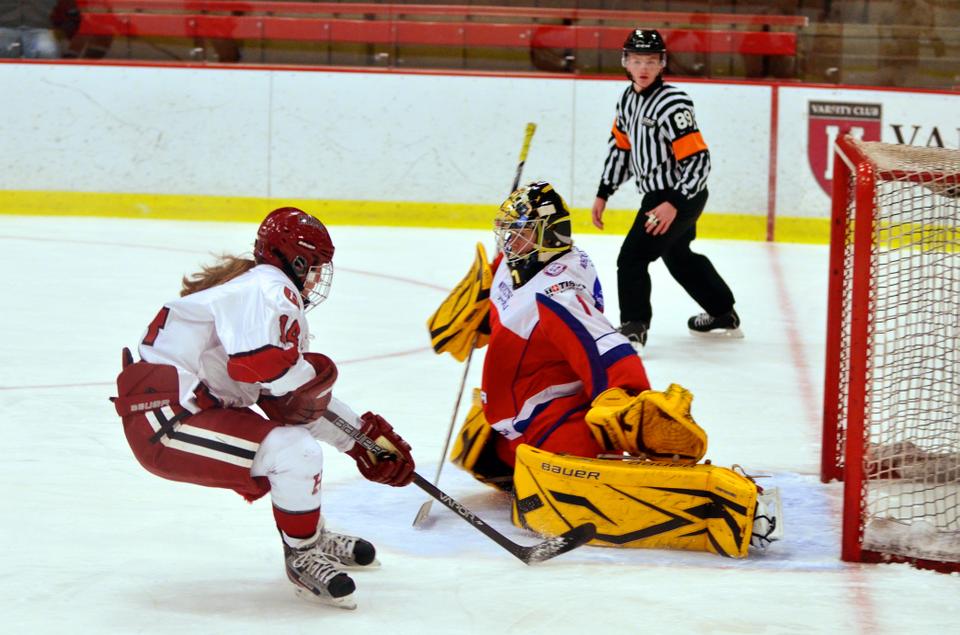 Senior forward Jillian Dempsey led the Crimson with 24 goals, eight more than any other player on the team. She was the third-highest scorer in the ECAC and was named first-team All-Ivy and All-ECAC.
By Daniel A. Grafstein, Crimson Staff Writer

On a squad that preaches “Team First,” it might seem difficult to single out and recognize an individual player. But co-captain Jillian Dempsey is no ordinary player.

Whether getting to loose pucks, generating scoring chances, or blocking shots, the forward has come to embody the toughness that characterizes Harvard women’s hockey.

“She’s a goal-scorer, but she also makes those gritty plays,” co-captain goalkeeper Laura Bellamy said. “She’s not afraid to get in front of pucks and be tough.”

Of the 33 games in which the graduating senior played this season, she recorded a negative plus-minus just four times.

“You will never in your life find someone that works harder,” Dempsey’s linemate junior Lyndsey Fry added. “She certainly taught me what it means to be a Harvard hockey player.”

Dempsey was rewarded for her work ethic this past season. She paced the Crimson with 24 goals and 21 assists. The numbers, virtually identical to her junior season totals of 27 and 21, respectively, put Dempsey at 18th in the country in scoring and brought her career totals to 76 and 72, making her the ninth-most prolific scorer in Harvard history.

“She’s fast, and she’s strong for her size,” Bellamy said. “But the biggest thing that everyone will say about her is how passionate she is.”

The savvy veteran drew on that passion when it mattered most.

In the ECAC semifinals, Dempsey recorded a goal to give the Crimson a cushion that it would not surrender before finding Parker on an empty-netter to put the game away.

Recording 11 goals and eight assists, Dempsey was awarded back-to-back ECAC Player of the Month awards in November and December.

Her play attracted national attention as well. After spending significant chunks of time with the U.S. national team in 2011-2012, Dempsey was invited back to try out for the national team this upcoming June.

“I tried to give it my best, work hard, and have fun,” Dempsey said. “Luckily for me, the pieces fell together, and it worked out nicely.”

But what Dempsey did off the ice was equally noteworthy.

“Our team has so much respect for her,” Bellamy said.

Dempsey’s leadership will surely be missed next season, as the Crimson enters life under new management following the temporary departure of head coach Katey Stone, who is leaving to take over the U.S. women’s national team for its Olympic campaign.

“On the ice, off the ice, you are not going to find someone who will push you quite like [Dempsey did],” Fry said.