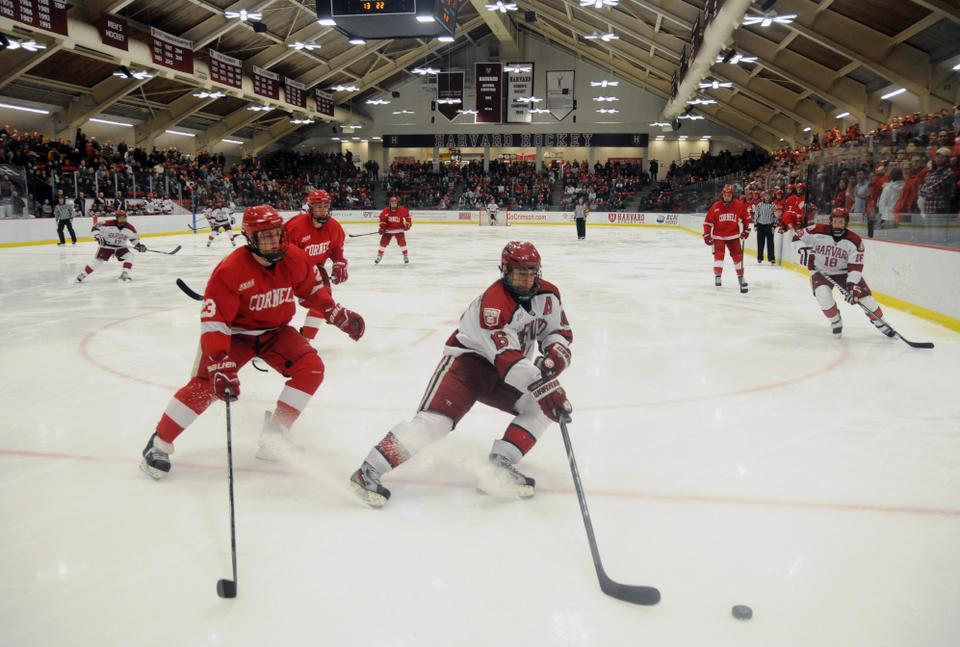 For the Harvard men’s hockey team, the 2012-13 season was one of fleeting highs and sustained lows.

The Crimson beat then-No. 10 Cornell on the road, erased a three-goal deficit at then-No. 8 Boston University, and upset then-No. 1 Quinnipiac. But that same team also experienced a three-month winless streak against conference opponents, finished last in the league standings for the first time in program history, and fell from first to worst on the power play.

Harvard struggled through the winter after injuries and unexpected departures left the team shorthanded. The Crimson won only one game in the months of December and January, as coach Ted Donato ’91 reshuffled lines and called up a defenseman from the Harvard club team.

“It was a unique and strange season due to some unforeseen circumstances,” Donato said. “It was a tough year injury-wise. We were really snake-bit with the number of guys that missed the amount of time that they did.”

Harvard opened its season strong, carrying high expectations following a surprise run to the conference championship game in 2012. The Crimson cruised to a 4-1 win over then-No. 10 Cornell and boasted a winning record through the month of November. Freshman forward Jimmy Vesey netted five goals in his first five games.

Yet, Harvard would win only one of its next 15 contests following leaves of absence from sophomore defensemen Max Everson and Patrick McNally. A 5-0 home loss to UMass-Lowell on Dec. 10 signaled the beginning of the Crimson’s struggles. Harvard would not win a conference game until a 4-1 victory over Colgate on Feb. 15.

In the midst of Harvard’s toughest losing stretch, the Crimson did manage to pull off a shocker at Boston University on Jan. 9. A breakaway goal in overtime from senior forward Conor Morrison capped off a 4-0 Harvard run to secure a 6-5 win.

Unfortunately for the Crimson, the impressive comeback failed to spark a lasting change of fortune. Harvard dropped its next eight games following the win over the Terriers. A year after leading the nation on the man advantage, the Crimson’s power play efficiency rating ranked last among Division I teams after a 4-1 loss to Boston College in the Beanpot semifinal.

Harvard came closer to full strength in the final month of the regular season. In the year’s penultimate home game, the Crimson unseated then-No. 1 Quinnipiac, 2-1, in overtime. Freshman forward Kyle Criscuolo provided the tying goal early in the third period before senior center Alex Fallstrom netted the game-winner with less than 20 seconds left in the extra frame.

“It was just great winning that game and proving that we could be a real contender in the playoffs,” said Fallstrom, who led the team in points this year. “It’s something that I will always remember when I think back to my Harvard career.”

The win was Harvard’s first over a top-ranked opponent since 2004.

In the postseason, the Crimson looked to make some noise after edging Dartmouth, 2-1, in the opening game of the first round of the ECAC Tournament. But the Big Green dominated Harvard by an aggregate score of 10-4 over the next two games to deny the No. 12 seed any shot at postseason redemption.

Harvard can take some consolation in the fact that it had to contend with the nation’s top conference this year. The ECAC had a banner season, with Yale and Quinnipiac meeting in April for the national championship.

“It was apparent throughout the year that our league was very strong, and you can see our non-conference record was a great example of that,” Donato said.

The Crimson will have to continue to fill voids next year as it graduates six seniors from the Class of 2013. But unlike this year, a full Harvard bench should have the personnel to step in.

“We will have a really large influx of players,” Donato said. “Next year, we will have more than a full allotment. Hopefully, we’ll put a great amount of time this summer and fall into doing some things that we hope will allow us to be more healthy than we were last year, and I think, from a numbers standpoint, we will be better situated to handle some injuries.”

As Fallstrom prepares to pursue a professional career with the Boston Bruins organization, he believes that the team’s young core can build off the year’s highs and lows.

“We were really disappointed, but I think a lot of good things can still be taken away from this year,” Fallstrom said. “All these guys have one more year of experience, and I think that’s going to benefit them a lot.”