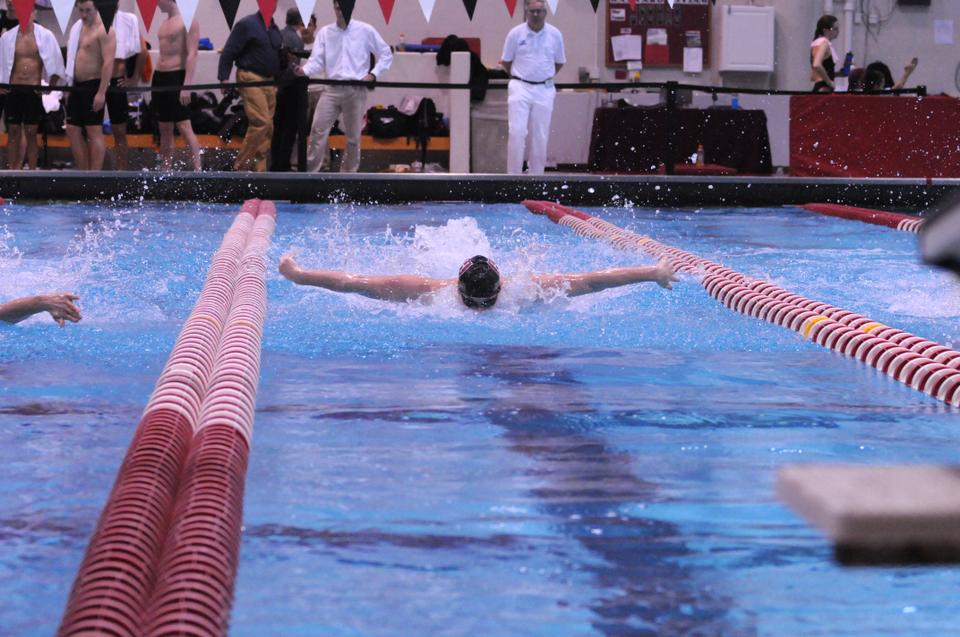 For the Harvard men’s swimming and diving team, the season wasn’t perfect, but it sure was close.

“I think I’d say this season was a pretty incredible one from the standpoint of this team taking it to another level, in terms of commitment and the achievement of individuals,” co-captain Owen Wurzbacher said.

A runner-up finish at the Ivy League Championships was perhaps the only negative in what was an otherwise groundbreaking season for the Crimson, which went a perfect 9-0 in dual meets on the season, including an unblemished 7-0 against Ivy League competition.

Harvard secured the Ivy League dual meet title on the heels of a record-breaking win against Princeton, when the Crimson became the first Ancient Eight team ever to beat the Tigers in their home pool.

“I think we will take confidence from that win,” Wurzbacher said. “It gives us faith in our abilities.”

The Crimson won 14 of 19 events at the HYP meet and set three school records en route to the victory.

“[We gained] a level of confidence in having achieved that [win],” sophomore Chuck Katis said. “I think we know what we can do. I think that was one of the pinnacles of this season, to walk in and beat that team, and on that day, we were better than them.”

Harvard went on to clinch the dual meet title with a win against Penn two weeks later and rode a wave of confidence heading into the Ivy League Championships. The Crimson looked to upset the four-time defending champion Tigers, and for a while, it looked like they might do just that.

But Princeton would not falter down the stretch and edged Harvard despite strong performances across the board by the Crimson.

“Obviously, when you look back, you tend to focus on some of the things that didn’t go perfectly, or the things you wish you could’ve done better,” Wurzbacher said. “But I think as a team, we really excelled.”

“We accomplished a lot of great things,” Katis said. “We had 10 team records broken this season, so that was a pretty big step forward, and we had the biggest team we’ve sent to NCAA’s in a long time. [We] had some great performances, not only on the swimming side, but also on the diving side all across the board, from ECAC’s to Ivy’s and then even NCAA’s.”

Katis was one of the six Crimson swimmers who represented Harvard at the 2013 NCAA Championships. Classmate Michael Mosca became the first Crimson diver to qualify for the meet in 10 years after finishing second in the one-meter and fourth in the three-meter at the NCAA Zone A Diving Championships.

An untimely illness hampered Katis during the national championship meet, and Harvard failed to make the finals in any event, but the Crimson turned in a strong effort at the season-ending meet, posting five top-30 finishes.

“Every year, stuff happens,” Katis said. “I don’t think overall we represented ourselves as well on the national level as we probably should have. But it’s in the past, and the work that we did will 100 percent show up this next year.”

The 2012-13 season was nonetheless a groundbreaking year for Harvard, as it was ranked as high as No. 16 in the national polls at one point.

“I think the culture of commitment we’ve put together is something very special and something that I think will last into the future,” Wurzbacher said. “I’m really proud to have been a part of the team, and I know the future years will be even better than this one was.”

The Crimson will look to pick up where it left off next season as Harvard works to regain its position atop the Ivy League and make a splash against some of the nation’s best in the water.

“The big goals of next season are to keep the momentum moving,” Katis said. “We’ve made some great steps this year, and those are just the first steps to something bigger that we’re going to achieve here.”