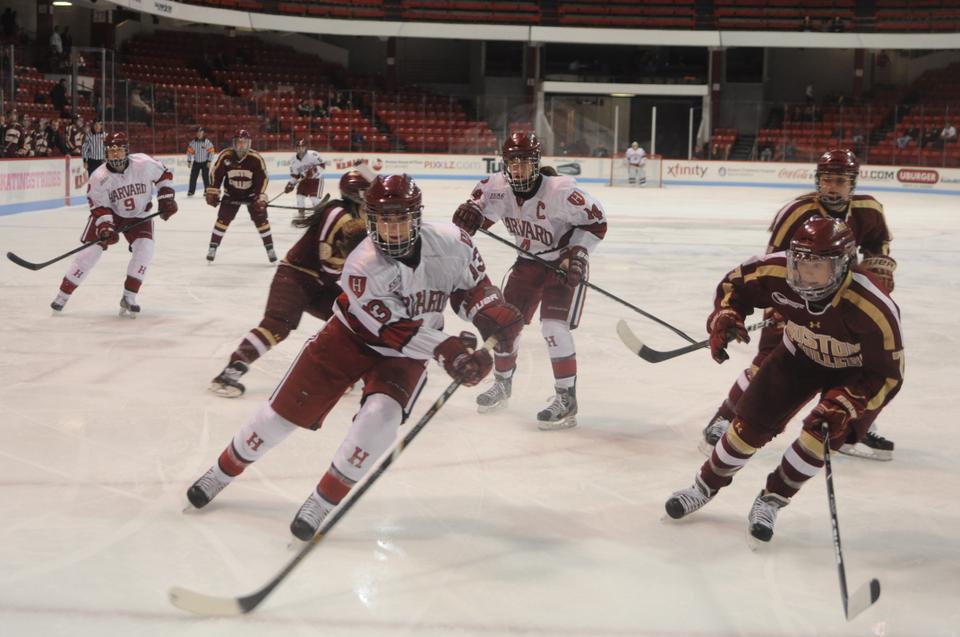 Junior Kalley Armstrong netted 11 goals en route to the NCAA tournament. The Crimson lost to BC in the quarterfinal round.
By Daniel A. Grafstein, Crimson Staff Writer

But the Crimson got as good a start as it could have hoped for and never looked back.

“Doing what we weren’t expected to do was probably the best part of the whole experience,” junior forward Lyndsey Fry said.

In the span of nine days, Harvard swept four conference opponents on the road by a combined score of 18-1. The Crimson would ride the hot streak to an 18-1-1 start.

“You just got to keep grinding and hope it works out,” co-captain forward Jillian Dempsey said of the long season.

When the Crimson returned to Bright Hockey Center, it took down eventual ECAC champion Cornell.

“The most rewarding thing was, as an upperclassman, finally beating teams like Boston University and Cornell,” Fry said. “In my time here we’ve never won big games like that against top teams.”

While Harvard fell short of accomplishing its ultimate goal of winning the national championship, the Crimson’s season was interspersed with plenty of high notes, including its first Ivy League title since 2009, a playoff run in the ECAC, and a No. 2 spot in the national rankings at one point during the year.

“The fact that we pulled together with what we had was unbelievable,” Fry said. “The people that needed to step up stepped up.”

In the ECAC postseason’s final weekend, Harvard avenged its lone home loss against Clarkson in the semifinals before falling to a Cornell side that benefitted from playing on its home ice.

“To finally get that win [against Clarkson] at the opportune moment was pretty clutch and amazing,” Dempsey said.

The semifinal victory, a response to a disappointing Senior Day, was impressive enough to earn the Crimson a spot in the NCAA tournament.

The underdogs bowed out in the quarterfinals, falling 3-1 to Boston College.

“All of us in our hearts believed we could have won that game,” said Fry of the game that brought the Crimson’s season to a premature halt. “We just didn’t show up that day.”

The squad owes a large part of its success this season to the goaltending duo of freshman standout, Emerance Maschmeyer, and outgoing co-captain Laura Bellamy.

“We competed every day and just made each other better,” said Bellamy, who owned the nation’s top goals-against average by the season’s end.

“We were extremely fortunate to have two very capable goalies,” Dempsey added.

Harvard rode a 10-1-1 record to No. 4 in the USA Today/USA Hockey Magazine poll by midseason.

In its next game, the Crimson defended its perfect 8-0-0 ECAC record against a Union side still searching for its first conference victory.

Harvard humiliated the Dutchwomen, netting nine goals in front of a Union-friendly crowd in Schenectady, N.Y.

Dempsey found the back of the net twice and assisted on three other goals over the course of the onslaught. The senior led the Crimson in scoring on the season with 45 points.

Dempsey had support from junior linemates Kalley Armstrong and Fry. The two combined for 27 goals and 31 assists.

“We both see the ice really well,” Fry said. “Our styles mesh well together.”

Freshman forward Mary Parker also played a big role in a Crimson offense that scored 3.32 goals per game, a mark good for eighth in the country.

The Union game catalyzed a Harvard side that took the next seven games in regulation.

“Of course that gets the team psyched,” said Bellamy of the scoring in the road matchup. “We were feeling good about ourselves so that probably brought up the morale.”

Due to inclement weather in February, the Crimson was forced to close out its regular season later than initially scheduled.

An eventual victory over Yale in the postponed game gave Harvard, which managed just one point in its previous two scheduled conference matchups, a bit of momentum going into the postseason.

The Crimson went on to dominate Dartmouth in a best of three series, following a 4-0 shutout in the first game with a 3-0 victory the next afternoon.

Maschmeyer, who started both games in net, put on a clinic on home ice throughout the season, allowing just eight goals in eight games at Bright.

For the second straight season, Harvard dropped its first-round Beanpot matchup. This year, it fell to BC, which squeaked out the 2-1 victory after conceding a late goal to the potent Crimson offense. Harvard bounced back to beat BU 3-0 in the consolation game.