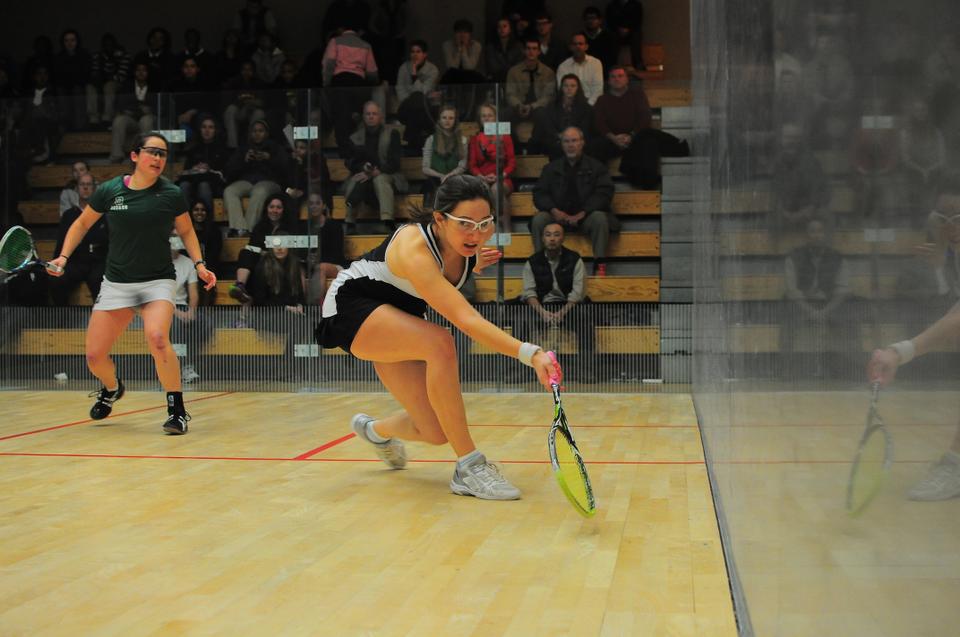 The Harvard women’s squash team entered its 2012-13 campaign with the pressure of living up to last year’s success. The Crimson had wrapped up the previous season with a win at the CSA National Championships, capping a spotless 17-0 record. Later in the season, then-freshman Amanda Sobhy secured her first collegiate national title.

“We entered the season with a target on our backs,” co-captain Natasha Kingshott said. “We knew that we had to work even harder to repeat the success we had in the previous season.”

The hard work paid off. Harvard captured its second straight Howe Cup with a 5-4 win over Trinity at the 2013 CSA National Championships, and Sobhy similarly defended her individual title. But the season was not without a bump or two along the road.

“I think it really is a testament to our team, our strength, and our determination that this season was probably the most difficult that we’ve had in recent years in that we had that loss to Princeton, which was quite a shock,” Kingshott said. “I think the way that we reacted to that loss and came back even stronger made the final victory at nationals that much more meaningful.”

After starting out undefeated in its first six matches of the year, the Crimson suffered its first loss in almost two years, dropping a 5-4 decision to the Tigers. It was a rare slip-up for a team accustomed to perfection.

Harvard quickly recovered from what could have been a devastating blow to the season, sweeping its next four matches with 9-0 victories and carrying a seven-game win streak into the national championships.

“Even though we lost a match during the season, we bounced back from it really well,” Sobhy said. “We played really well in the national championship. I’m just so proud of everyone coming out [at nationals] and giving it their all.”

Harvard’s championship run started out smoothly with a 9-0 win over Stanford in the quarterfinal match. A 6-3 win over Penn sealed a berth in the finals against Trinity, who had upset top-seeded Princeton to earn its shot at a national title.

It was a back-and-forth contest in the finals, as Harvard quickly gained an edge over the Bantams in the first rotation, but Trinity stormed back to close the gap through six matches.

In the end, sophomore Amanda Sobhy clinched the title for the Crimson with an 11-8, 11-7, 11-8 victory over Kanzy El Defrawy, who had earned a rare game win against Sobhy earlier in the season to hand the sophomore her first ever collegiate game loss.

“[The loss] definitely gave me motivation to show people that losing a game was not really supposed to happen,” Sobhy said. “It was great for Kanzy to get a game, and she’s a really great player.”

With the win, Sobhy secured the national title for Harvard, its third championship in the past four years.

“It’s almost like a dream,” Kingshott said. “You couldn’t have written a better ending. I know all the seniors are so proud to have been a part of something so special, for not only the last two years, but [when] we won our freshman year as well. It was surreal.”

Sobhy continued the Crimson repeat streak, as the sophomore clinched her second individual national title in as many years. Also joining Sobhy at the CSA Individual National Championships, freshman Michelle Gemmell won the first-round consolation, and sophomore Haley Mendez reached the finals of the second-round consolation.

The individual and team titles capped another standout season for Harvard, which, despite the loss to Princeton, secured its place atop the collegiate squash order.

“I think the way that we reacted to that loss [at Princeton] and came back even stronger made the final victory at nationals that much more meaningful,” Kingshott said. “When you work so hard and you do have such a heartbreaking low at one point, to finish so strong is just so gratifying.”