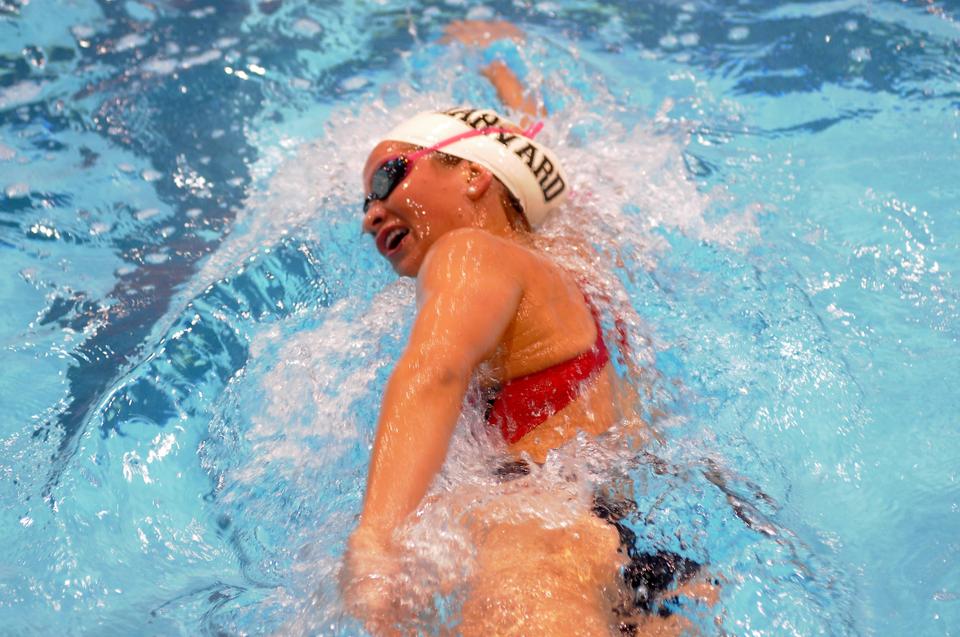 Sophomore Kelsey Hojan-Clark won the 400 IM for the Crimson in a 232-68 victory over Vermont. She was one of 19 underclassmen on the team.
By Hope Schwartz, Crimson Staff Writer

No record was safe when the Harvard women’s swimming and diving team jumped in the pool to compete this season.

Coming off a successful 2011-12 campaign that included an Ivy League title, the Crimson had high expectations. Harvard swept through its dual meet season undefeated and picked up a mid-major title given out by CollegeSwimming.com as program and pool records fell. But a slow start at the Ivy League Championships proved insurmountable, and Harvard finished second to Princeton.

“Everyone says they want to win, but saying it and believing it and working to achieve that are two different things,” Crimson coach Stephanie Wriede Morawski ’92 said. “Coming off [last year’s] win, you get tons of confidence immediately, and you know what it takes to do it again.”

Harvard kicked off its season with a bang in Ithaca, N.Y., extending its win streak over Cornell and Dartmouth to 28 and 32 meets, respectively. The Crimson broke eight pool records its first time out, and freshman Kendall Crawford broke the program record in the 100-yard backstroke with a time of 55.04 seconds.

A week later, Crawford was at it again. Swimming in Blodgett Pool for the first time in her career, Crawford shaved five-tenths of a second off her time to reset the record in the 100-yard backstroke. Classmate Danielle Lee set the record in the 50-yard backstroke at 25.92 seconds, the first time in Harvard history that a swimmer finished the event in less than 26 seconds.

“Freshman year is always a tough time transitioning, but the freshmen this year did an amazing job,” junior co-captain Sara Li said. “They just go with the flow, go with the adrenaline, and the team feeds off it.”

The 11 rookies quickly adjusted to swimming at the college level. According to Morawski, swimmers who competed at the club level in high school must refocus their priorities from racing against the clock to racing against one another.

Of the nine new program records that were set this season, freshmen were involved in five of them. In addition to her top times in the backstroke events, Crawford set the school mark in the 100-yard butterfly at Harvard’s final meet of the regular season against Yale and Princeton. The freshman also bested her own time in the 100-yard backstroke by more than a second.

Though the Crimson soundly defeated Princeton, 199-99, to close out the dual meet season, it could not repeat the performance at Ivy League Championships. Harvard fell to the Tigers, 1474.5-1374, at Princeton in its last conference competition of the year.

The first day of the meet ultimately doomed the Crimson, which fell 61.5 points behind Princeton. Senior diver Brittany Powell was the only winner on the night after qualifying in second place. She beat out Princeton’s top diver by more than 20 points for Harvard’s first title in the one-meter dive.

Li set a program record in the 50-yard freestyle, but she finished third in the event as one of the Crimson’s four top-five performances. Harvard gained ground on the second day with nine top-five finishes, but it was not enough to overtake Princeton.

“What I was most proud of was how they continued to fight back, even after being shaky the first morning,” Morawski said. “Coaches came up to me and told me they were incredibly impressed with the poise and unity they showed throughout the meets.”

The Crimson finished fifth at ECAC Open Championships, and Li set a pool and program record in the 100-yard freestyle, finishing in 48.67 seconds. Li’s victory was one of two for Harvard, and Crawford picked up the Crimson’s second win in the 200-yard backstroke.

Despite the loss at Ivy League Championships, Harvard earned three individual bids to the NCAA Championships. At Zone A Diving Championships, Powell qualified for the finals in both the one-meter and the three-meter event. She finished in 15th place overall in both.

Li and sophomore Courtney Otto qualified on the swimming side, but Otto declined the invitation due to injury. Li swam in all three freestyle events, and her best finish came in the 200-yard freestyle, in which she came in 34th with a time of 1:46.98 seconds.

Although Harvard was unable to repeat as Ivy League champions, Li said that she was satisfied with the season.

“We are a different group of people and a different kind of team,” Li said. “We knew our potential, and we wanted to have it as a benchmark, but we talked a lot about continuing to build our legacy, not trying to duplicate what we did last year.”