Just a year after edx set out to revolutionize higher education, the massive open online course platform has attracted almost one million users from across the planet 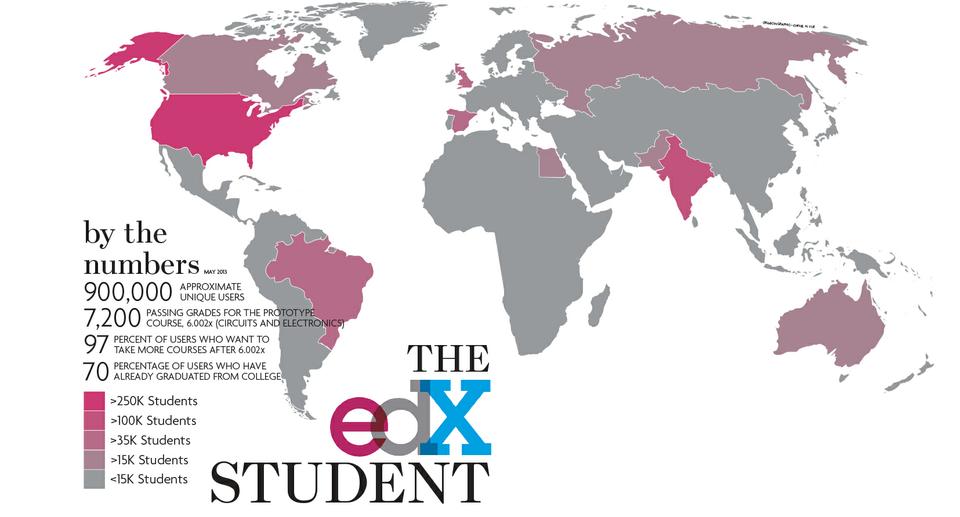 In its first year, nearly 1 million people have registered for Harvard's online learning initiative edX. Those registrants come from all over the world.
By Amna H. Hashmi and Cynthia W. Shih, Crimson Staff Writers

He is a 17-year-old whiz-kid from Jabalpur, India who harbored aspirations of building a resume capable of getting him into MIT.

She is a 33-year-old server and office technician for the Cheesecake Factory looking for “a mental challenge.”

She is a 51-year-old mother of three who registered for an online course after reading an op-ed article about the rise of massive open online courses that left her “intrigued.”

He wanted to prove that he could earn course credit online equal to the amount required to earn a bachelors degree in one year.

She enrolled in a blended course at San Jose State University that integrated virtual learning into the classroom.

They are a handful of the approximately 900,000 people who have registered for edX, the online learning venture launched jointly by Harvard and MIT about one year ago. The edX class from the platform’s inaugural year is far from homogeneous, including a wide range of individuals with different ages, genders, ethnicities, and levels of education.

And their diversity does not just stem from measurable characteristics. While every person who logs onto edX.org is presented with the same course offerings, the motivations for signing up and committing to completing a course vary from student to student.

The swelling in the size of the edX student body has been accompanied by an enormous expansion of the platform itself. Over the past year it has grown rapidly from its two Cambridge-based founders to include a total of 27 institutional partners from across four continents, contributing to edX’s vision of what its president Anant Agarwal described as a “planet-scale transformation of education.”

While MOOC advocates hope that transformation will lead to a democratization of higher education, low completion rates and edX’s changing economic model makes increasingly relevant the question of who takes the edX course—and why.

Synthesizing demographic data from the month of May yields an edX student who is likely to be a 30-year-old American male with a Bachelor’s degree. But pointing out pluralities does not speak to the diversity of the virtual student body.

Geographically, the distribution of edX students is global: 13 percent come from India, 4 percent from both the United Kingdom and Brazil, 3 percent from Spain, 2 percent each from Canada, Russia, Pakistan, Egypt, and Australia, and 38 percent from other foreign countries.

With over one million course enrollments, and students from nearly 200 countries around the world in its first year, Agarwal said he thinks the edX venture is “completely democratizing education.”

Like the audience of a Harvard course on the first day of the semester, the people registered for edX fall into three categories: shoppers, auditors, and enrollers.

On the edX platform, those categories translate into those who sign up out of curiosity, those who watch and read the virtual material without turning in assignments, and those who successfully see the class through to the end.

The program currently offers free certificates of mastery to users who master a course at a level that would equate to a passing grade. Each certificate bears the name of the institution that created the course. For some, having that distinction delivered to their inbox is sufficient motivation to take an edX course.

Amol Bhave, a 17-year-old from Jabalpur, says the promise of a certificate was central to his decision to enroll in Agarwal’s course, MITx 6.002x: “Circuits and Electronics.”

“It’s a thing to be proud of to have a certificate with the MIT name on it, especially here in India,” Bhave said.

After Bhave earned a 97 percent grade on the course’s final exam, he created his own online course that integrated videos, a grading mechanism, and a syllabus in a style inspired by the edX platform. An impressed Agarwal wrote a recommendation letter for Bhave to MIT, which ultimately helped his admission to the prestigious school.

“Without edX, I couldn’t have even dreamt of colleges,” Bhave said. “It changed my life, and edX is going to change the world.”

At the other extreme is Doty, a 33-year-old who works at a Virginia-based Cheesecake Factory, who said she was motivated to take CS50x: “Introduction to Computer Science I” by the promise of “mental stimulation” but that she had no intention of completing it.

“I also have dipped my toes in others just to take a look, consciously knowing it wouldn’t fit my schedule, but wanting to keep it in mind for the future,” Doty said.

Diana M. B. Chen ’16, a Harvard freshman, watched edX lecture videos late into the night in her Weld dorm room in the hopes of exploring subjects she could not pursue in the classroom due to her commitments as a coxswain for the Harvard Men’s Varsity rowing team.

Yet edX disappointed Chen, who said she felt many of her virtual classmates ignored the educational benefits of courses in their fixation on earning a certificate. She described her MOOC experience as “not even a tenth of what it’s like to go to Harvard.”

Low rates of completion suggest that while individuals register for edX for different reasons, many students do not see an explicit value in the certificate itself.

Computer science lecturer David J. Malan ’99 tracked the number of students who engaged with his virtual course, CS50x, from start to finish. Out of the 150,349 students who registered for CS50x, 10,905 submitted the first problem set. Of that group, 3381 individuals said they hoped to get a certificate out of the course, and only 1388 actually received one.

According to data collected by MITx with funds from the National Science Foundation, that same trajectory occurred in Agarwal’s course 6.002x, for which 154,763 people registered, 26,349 turned in the first problem set, 9,318 students passed the midterm, and 7,157 ended up certified.

Like Chen, some edX students said they would prioritize other commitments or in-person educational experiences over the virtual classroom, especially because there is no tangible value—such as a GPA boost or course credit—associated with the edX certificate.

For others, like John Chirikjian, an 18-year-old high school senior from Maryland who did not finish CS50x, a certificate is unnecessary as long as one has learned something new.

“Certificates don’t mean anything. I’m looking to learn things, not to earn a degree or get credit,” Chirikjian said. “EdX does not transfer to anything.”

Malan agreed that “completion rates have been overemphasized in the MOOC community.”

“Saying only 10 percent or 1 percent of students have finished a MOOC is misleading,” he said. “To argue that they are not effective educational opportunities is true for some students but not all.”

CHARGING FOR THE CERTIFICATE

Currently, edX does not charge its users any fees for participating, but the non-profit is considering multiple financial models to ensure its endurance—including a charge for face-to-face professor contact or certificates.

Some Harvard professors have said that charging for courses could increase completion rates by giving MOOC students a financial incentive to complete their courses.

This theory has already been tested in flipped classrooms, in which colleges supplement in-class material with online information.

“The likelihood of the completion would then go up if we charge $100 or set it up as an academic experiment,” said Jorge I. Dominguez, a government professor and Harvard’s vice provost for international affairs, after outlining a hypothetical financial model. “We would charge $1,000 for the course, and for every week you complete, we would rebate $100, and if you complete it and pass it at the end, it would be free.” Dominguez added that there is a difference between “for-profit” and “for-free”—edX could charge its students without making any money.

Still, there are those who say charging for online courses hinders edX’s founding goal of democratizing knowledge.

“Having courseware open and free so that everyone can access high quality education is a real fundamental part of online learning,” said Bhave. “If I had to pay, I might not have taken the course.”

If someone like Bhave is to remain a version of the edX student, the online platform will have to ensure its future accessibility and relevance to its constituents.