'There Is No Such Thing as Failure,' Oprah Tells Harvard Graduates 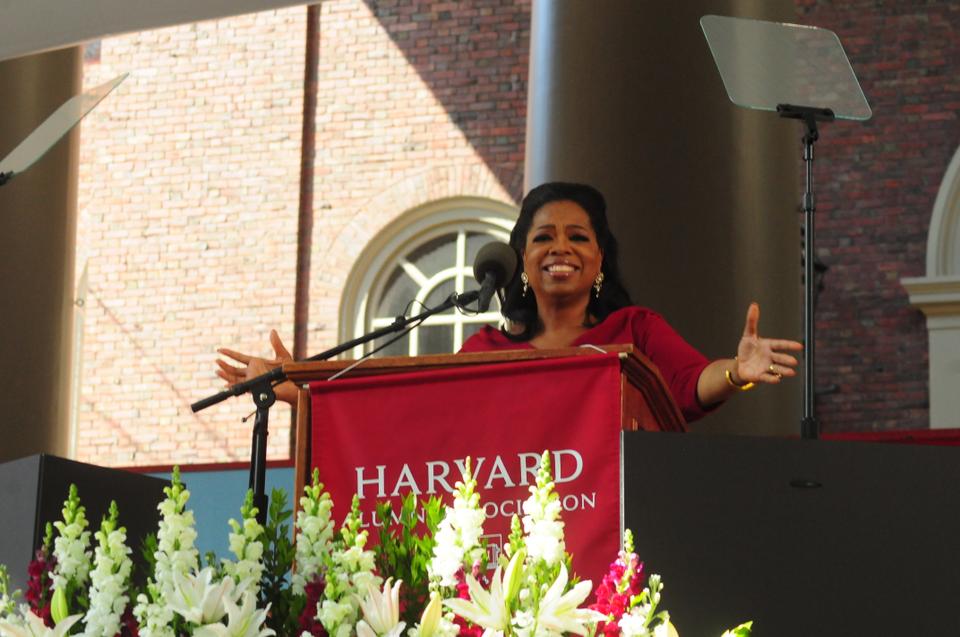 In the commencement 2013 afternoon exercises, Oprah Winfrey encouraged students to rebound from setbacks, using her own experiences as examples of how to do so. By Muhammad H Tahir
By Matthew Q. Clarida, Crimson Staff Writer

Oprah Winfrey, the media mogul and philanthropist of international fame, urged the University’s newest graduates to embrace setbacks as an opportunity for growth in her Commencement speech in Tercentenary Theatre Thursday afternoon.

“At some point, you are bound to stumble,” she told the crowd of thousands of graduating students and their friends and families. “You will at some point fall, and when you do, I want you to remember this—There is no such thing as failure; failure is just life trying to move us in another direction.”

At times humorous and at others more serious, Winfrey began her 30-minute speech with a tongue-in-cheek reference to residential life at Harvard College.

“I’m going to address my remarks to anybody who has ever felt inferior or felt disadvantaged or felt screwed by life,” Winfrey began her remarks, jokingly adding, “This is a speech for the Quad.”

In a self-deprecating anecdote, Winfrey reflected on a moment of failure in her own life.

In mid-2012, around the time that University President Drew G. Faust called to suggest that Winfrey might come to speak at Harvard’s Commencement ceremonies, Winfrey was enduring what she called “the worst period in my professional life.”

Her newest television venture, the Oprah Winfrey Network, was struggling to make headway in the national media market, and had been dubbed a failure by a number of commentators.

In this moment of professional crisis, Winfrey recalled thinking: “What could I possibly say to Harvard graduates, some of the most successful graduates in the world, in the very moment when I had stopped succeeding?”

Despite her doubts, Winfrey accepted the speaking invitation from Faust, and subsequently saw the OWN network grow significantly in the last year.

For her, the temporary setback reignited a passion to succeed.

“Here’s the key,” she told the graduates. “Learn from every mistake, because every experience and encounter, particularly your mistakes, are there to teach you and force you into being more of who you are.”

In the latter part of her speech, Winfrey also addressed philanthropy, describing how, in the 1990s, she led her viewers in a spare-change donation initiative that collected over $3 million for a college scholarship fund.

She urged graduates to seek out opportunities to serve others in their careers and personal lives.

“Each of you has been blessed with this enormous opportunity of attending this prestigious school. You now have a chance to better your life, the lives of your neighbors, and also the life of our country,” Winfrey said. “When you do that, let me tell you what I know for sure: that’s when your story gets really good.”