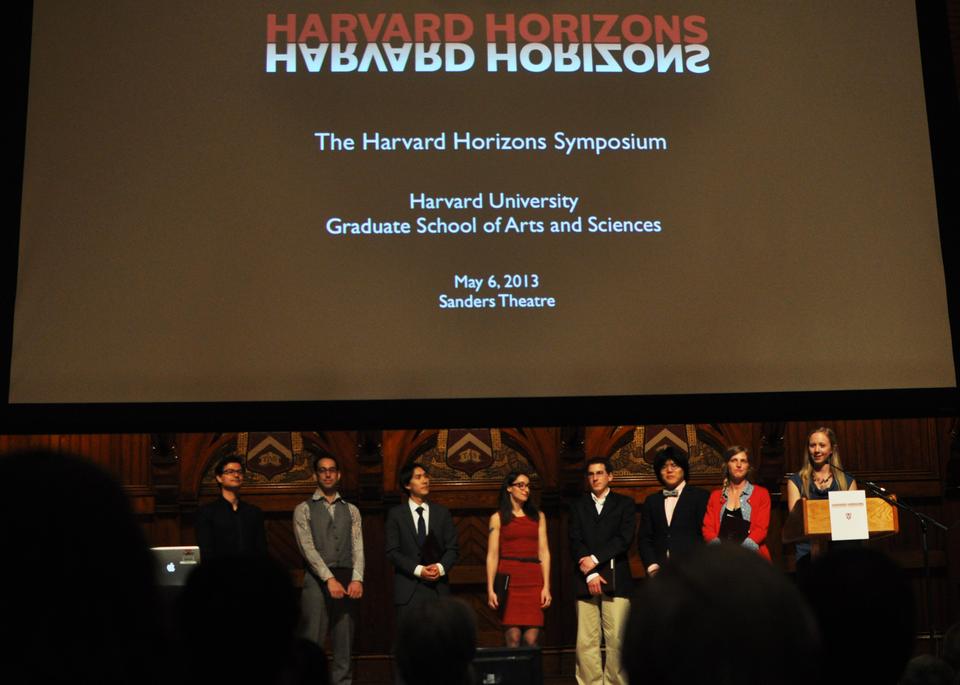 The Graduate School of Arts and Sciences’ inaugural Harvard Horizons initiative—a program designed to highlight some of the best work of Harvard Ph.D. students­­—culminated in a TED Talk-style symposium on Monday.

The event, which took place in Sanders Theater, consisted of a series of five-minute lectures during which the eight Horizon scholars presented their work and ideas. The students’ talks spanned a variety of topics, including applied physics, music, psychology, and English.

The eight scholars were selected from 55 applicants at the end of March and attended weekly workshops where experts coached them on communication skills such as voice, presence, and the use of visual aids.

Shigehisa Kuriyama, Chair of the Department of East Asian Languages and Civilizations, said the symposium presented snapshots of “the most interesting and cutting-edge research projects going on around campus” in just one hour.

“Looking at the intellectual return compared to the time investment, [it is] one of the richest events of the year,” said Kuriyama, who proposed the initiative in collaboration with GSAS Dean Xiao-Li Meng.

The eight students will form the first class of the Society of Horizon Scholars, a fellowship that seeks to “offer opportunities for community, mentorship, and professional growth,” according to the Harvard Horizons website.

Through the fellowship, previous scholars will be encouraged to communicate with new ones, said Visual and Environmental studies professor Laura A. Frahm, who co-directs the mentorship aspect of the program.

“We really want to gain an ongoing process and dialogue with [the scholars],” Frahm said.

According to Meng, Harvard Horizons began as an idea to create a platform for students to talk to each other across different disciplines and across different schools, but soon grew to showcase research achievements and offer mentoring and professional development resources for its scholars.

“Harvard has extremely talented students—we need to provide them with a venue,” Meng said.

Meng also said that because of large graduate student interest in the program, the team is considering scaling it up in the future, possibly through a J-Term program.

Graduate student Hansun Hsiung, who explored the history of the textbook and the rise of distance learning, said the program offered him the dual opportunity to understand academia and to improve his own communication skills.

Hsiung and other scholars also cited the opportunity to interact with and learn from each other.

“I’ve been really focused on my research—it was really great to hear what else has been happening on campus,” said Ph.D. candidate Alexander L. Fattal, whose research deals with the demobilization of FARC rebels in Colombia.

Stephanie Dick, a Ph.D. candidate in the History of Science department who covered the history of mathematics and computing, emphasized the community-building element of the program.

“We have truly bonded as colleagues and have become invested in each other’s work in a way that is still uncommon across disciplines,” she said in her closing remarks at the symposium.