At Worksites Across Campus, Workers Cope with Scorching Temperatures 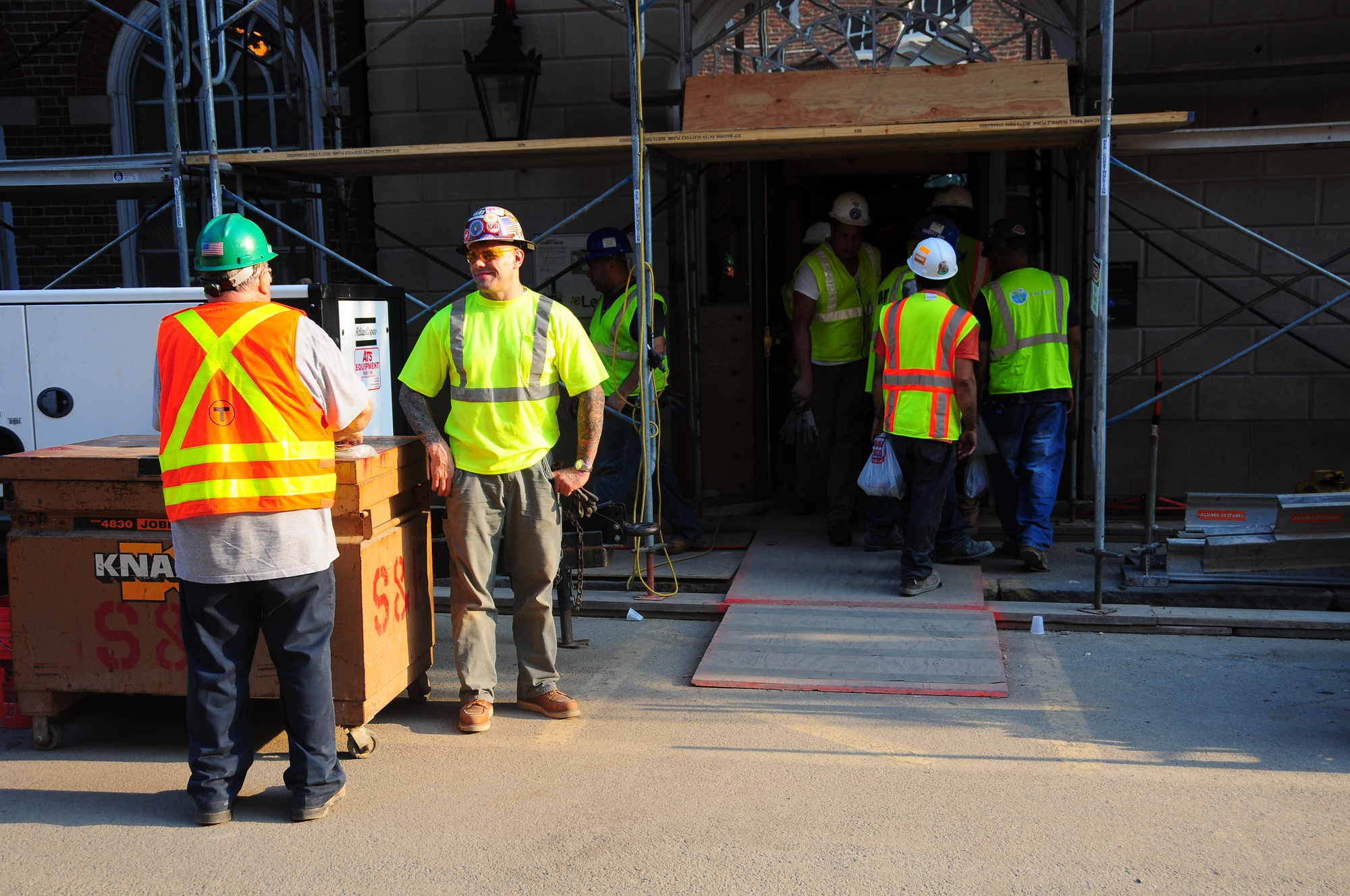 Workers talk near and walk through a Mill Street entrance to Old Leverett at around 6:30 p.m. Friday. Temperatures were still around 90 degrees in the area as they wrapped up the day's electrical and demolition work.
By Maya Jonas-Silver, Crimson Staff Writer

With temperatures nearing triple digits just past noon on Friday, three workers took a break in the worksite outside the nearly renovated Old Quincy building. Their supervisors had not mentioned anything about leaving the site early due to the heat, and the workers said they did not expect them to. One member of the trio, who stood with the others in a patch of shade, said of the day’s remaining work: “Gotta get it done.”

On a day in which temperatures hit 99 degrees in Boston and heat index values soared to an estimated 110 degrees, workers were out in full force at Harvard’s Old Quincy and Old Leverett buildings, which are being renovated as part of House Renewal, the University’s more than $1 billion plan to eventually refurbish all 12 of Harvard’s upperclassman Houses.

Workers nearly universally said they were being encouraged to drink water and take breaks, but two called the experience of working in such hot weather “miserable” and “brutal.”

Coming on the heels of a six-day heat wave, Friday’s heat was severe enough to prompt the National Weather Service to issue an excessive heat warning for much of eastern Massachusetts, including Cambridge. The warning, which was in effect from noon to 7 p.m., advised people to “avoid prolonged work in the sun or in poorly ventilated areas” and to be especially careful in the hottest hours of the day.

The scorching temperatures also motivated officials at some construction sites around campus to alter their plans for the day.

At noon on Friday, Mike Kilbride, a Consigli Construction Co., Inc., foreman, took down caution tape at the corner of Bow and DeWolfe Streets. He said he had received orders from his company to dismiss the employees from their work on the exterior of Adams House due to the heat.

At the Harvard Lampoon, a semi-secret Sorrento Square social organization that used to occasionally publish a so-called humor magazine and is now covered with scaffolding, construction workers changed their schedule, arriving at 7 a.m. and leaving at around 10 or 11 a.m. Lampoon president Eric R. Brewster ’14 wrote in an email that it was the workers’ decision to “beat the heat because the Lampoon is a free will semi-Sorrento humor square.”

But at other campus construction sites, operations continued as normal, though many took special precautions in response to the unusually warm weather.

Bob, an ABC Moving Services, Inc., operations manager at Quincy House, said that the members of his team were thinking carefully about safety and ensuring that workers were drinking a lot of water as they worked their standard eight-hour day. Bob, like several other workers interviewed for this article, only agreed to be identified by his first name because he was not authorized to talk to the media.

Purchased by workers or provided by the contractors they worked for, bottles of water were everywhere on campus construction sites. Painters kneeled on the sidewalk with bottles next to them. One worker paused while driving a construction vehicle to take a swig. As one worker lowered a wardrobe from a truck, another asked if he had gotten water. “I’m all set,” he responded.

Many workers emphasized that their bosses were taking precautions to keep them safe. “Make sure you stay hydrated—that’s the first thing they say,” Ed Hardy, an electrical worker, said while eating lunch in the courtyard of Quincy House.

At Old Leverett, Sean, a foreman at the site, mused that it was so hot “you could probably crack an egg and fry it” on the House’s roof. In such weather, his fellow Dimeo Construction Company employee K.T. said, “Worker safety is our first priority.... Here at Dimeo, we keep the guys hydrated.”

The workers’ safety precautions appear to have been successful. Lisa Hogarty, Harvard’s vice president for campus services, wrote in an emailed statement that there had been no reported cases of illness among workers as a result of the six-day heat wave.

“This is a credit to the general contractor’s supervision, subcontractor supervision, and all of the workers for remaining alert and looking out for one another,” wrote Hogarty, whose office oversees campus health and safety.

And not everyone was unhappy with the weather. One man, wearing a Harvard hat, seemed relaxed as he sat outside of Old Leverett.