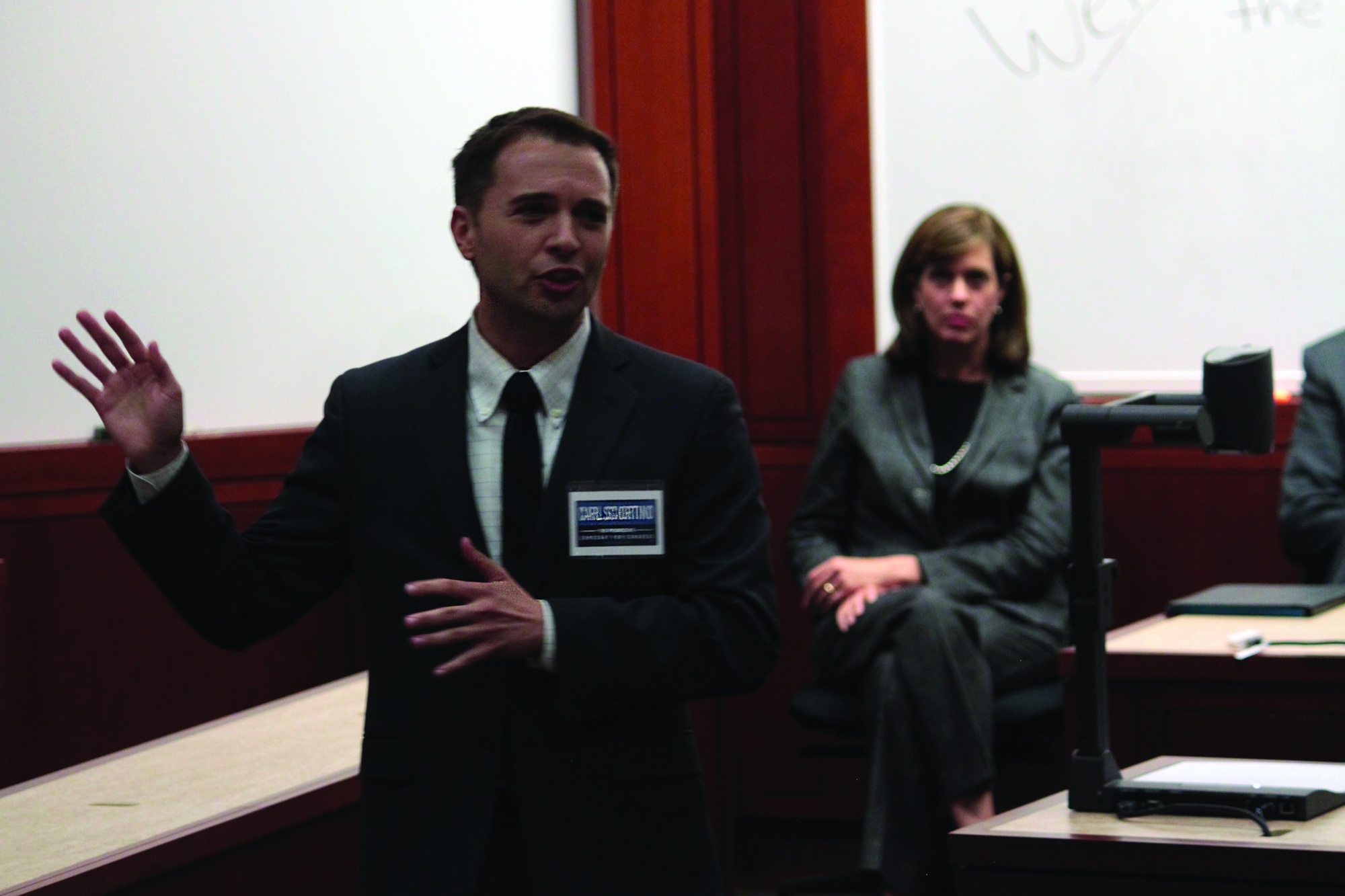 U.S. Congressional candidate Carl Sciortino tells Harvard and visting Tufts students what they can expect if he is elected to the vacant seat of now-Sen. Ed Markey, speaking at the Harvard Dems’ meet-and-great at the Institute of Politics on Tuesday. The event featured short speeches by five of the six Democratic candidates for the 5th Massachusetts district seat. A representative for the sixth candidate attended in his stead.
By Jared T. Lucky, Crimson Staff Writer

Five Democratic candidates vying for a vacant congressional seat met in a crowded auditorium Monday night at the Institute of Politics—competing not for votes, but for volunteers among the Harvard College Democrats.

After briefly introducing themselves to a group of approximately 60 students from Harvard and Tufts, the candidates, joined by a representative from a sixth candidate’s campaign, fielded questions on issues ranging from congressional gridlock to military intervention in Syria.

The six candidates—who together hold five Harvard degrees—hope to fill the seat for the 5th congressional district, which was left vacant when former Rep. Edward J. Markey won a special Senate election in June.

The district, which includes Cambridge, has historically been a Democratic stronghold, and all of the candidates identified themselves as left-leaning “progressives” likely to vote with the party on partisan issues like gun control, abortion, and health care.

“We are all going to vote exactly the same way on almost every single vote,” said Martin Long, the only Democratic candidate who does not currently hold elected office. “What matters is how we approach it, and how we’re going to fix gridlock.”

While Long said that he would focus on making Congress work more efficiently, the other candidates sought to differentiate themselves by highlighting their work on hot-button progressive issues.

State Senator Will N. Brownsberger ’78 stressed his independence from party leadership and his commitment to transparency in campaign finances. Middlesex County Sheriff Peter J. Koutoujian, who described himself as “a kid from Waltham, down the street,” said that he would work on promoting equal rights for women and reforming education laws.

After Daniel Backman ’15 asked the candidates if they would consider supporting any legislation proposed by Republicans during the Obama administration “in the interest of breaking gridlock”, Long, Brownsberger, Koutoujian, Sciortino, and Clark did not name a specific bill that they would be willing to reach across the aisle to support. Spilka’s representative cited the McCain-Feingold Act and other campaign finance reform bills as a point of common ground with some Republicans.

The six candidates will square off in a primary election on Oct. 15. The primary winner will face one of the two Republican candidates—Boston attorney Frank J. Addivinola Jr. or Mike Stopa, a Harvard physicist—in the general elections scheduled for Dec. 10.

An earlier version of a photo caption accompanying this article incorrectly stated that a Monday night meet-and-greet at the Institute of Politics featured six Democratic candidates for the open fifth district congressionalseat. In fact, five candidates atttended the event, while the sixth sent a representative in his stead.