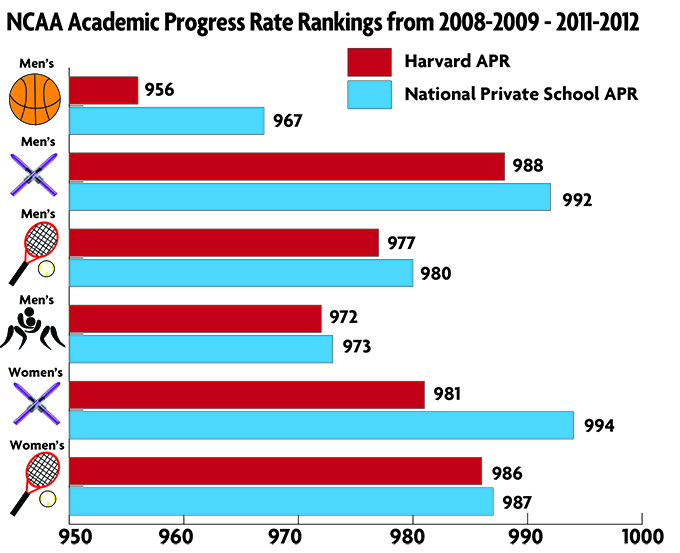 An NCAA rankings metric that assesses the academic performance of collegiate athletic programs recently gave six of Harvard’s varsity teams, including men’s basketball, scores below the average for those programs at other private institutions.

The Academic Progress Rate rankings, which were released by the NCAA this past June, are calculated out of 1000 points and measure the performance of individual varsity athletic teams based on a four-year rolling average of data submitted by each institution. The data considered in this year’s rankings covers the four seasons from 2008-2009 through 2011-2012.

Aside from the six teams with below-average APR scores, Harvard’s programs generally fared well in the rankings. Fifteen Harvard teams—three men’s and 12 women’s—received perfect single-year APR scores of 1000 for the 2011-2012 school year.

Tim Williamson, the Harvard Athletics Department communications director, wrote in an emailed statement that Harvard’s teams are “in full compliance” with the Ivy League’s academic standards.

“Harvard has maintained our high academic standards for all students and student athletes,” he wrote. “We are proud of the many contributions that Harvard’s student athletes make to our vibrant learning community while on campus and to our society after they graduate.

Harvard’s Athletics Department also expects the men’s basketball team’s APR score to change in next year’s rankings, which will assess the four seasons from 2009-2010 through 2012-2013.

“An early calculation of the APR for next year indicates a perfect or near perfect score for our men’s basketball team, reaffirming the program’s continued commitment to academic achievement,” Williamson wrote.

According to the NCAA’s website, the APR rankings take into account “the eligibility and retention of each student-athlete, each term.”