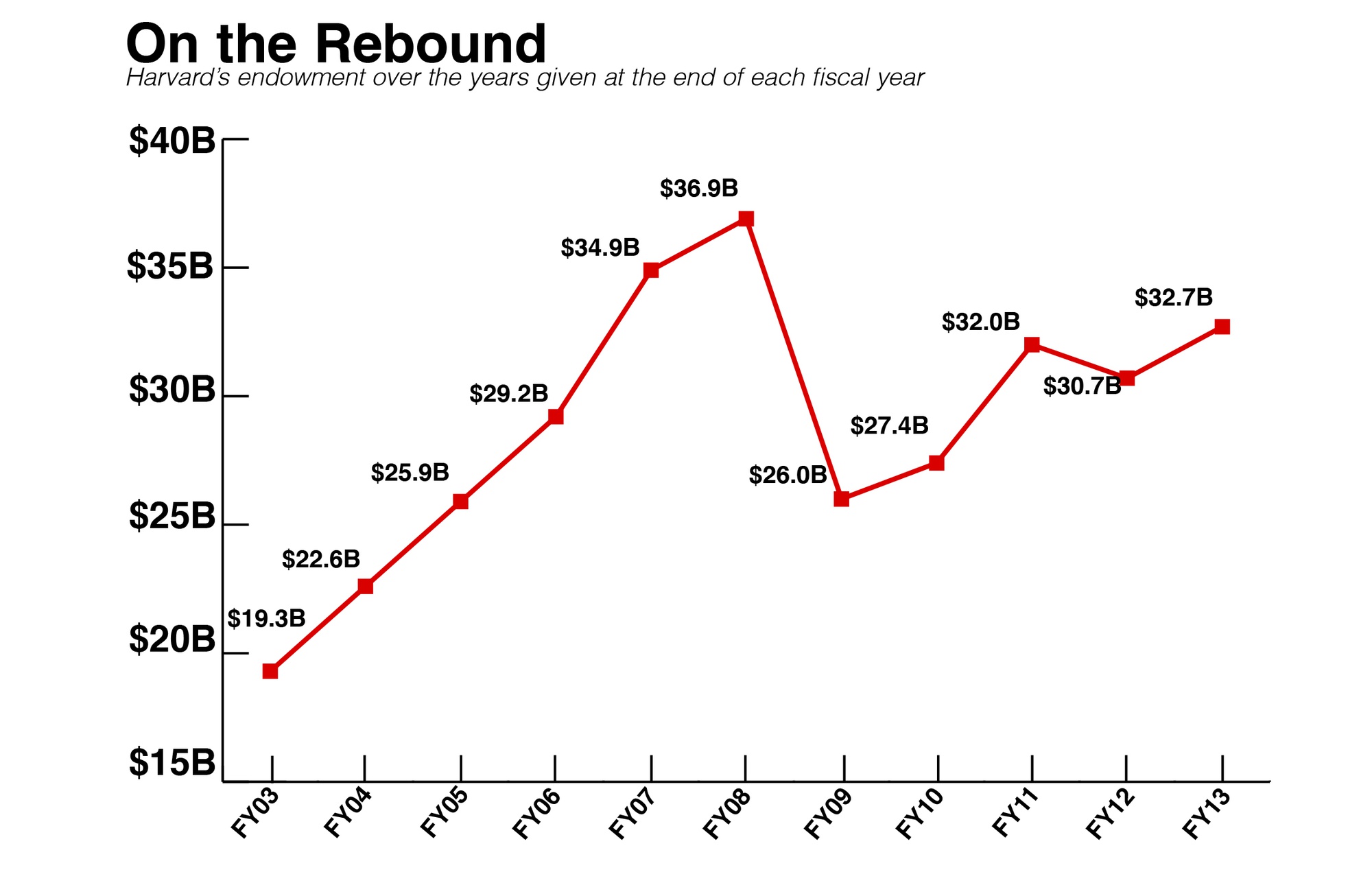 Harvard’s endowment surged to $32.7 billion during the last fiscal year, with an annual rate of return of 11.3% on its investments, University administrators announced Tuesday. Those returns, which apply to fiscal year 2013, mark vast improvement from the previous fiscal year, during which the endowment’s value declined slightly to $30.7 billion.

The $32.7 billion figure is still lower than the high-water mark of $36.9 billion that the endowment reached before the financial crisis of 2008, when it plummeted $11 billion. Similarly, the rate of return is not as high as it was in the early 2000’s. Even so, if this year’s rate of return were to persist for the foreseeable future, the endowment would break its previous record in just a few years.

“Thanks to this talented team we have made a strong recovery since the global economic downturn of 2008-2009, and our outperformance this year alone contributed about $600 million of additional value to the portfolio over and above the markets, net of all fees,” said Jane L. Mendillo, president and CEO of Harvard Management Company, in an HMC report released on Tuesday afternoon. HMC manages the University’s endowment, while the Harvard Corporation—the University’s highest governing body—determines the proportion of the endowment that is distributed for University operations.

Mendillo’s report explained that the “endowment” refers to a collection of more than 12,000 funds, many of which are restricted by their benefactors to specific purposes. Its total value depends not only on investment returns, but also on the size of annual distributions to the University’s operating budget, as well as new donations.

During the last fiscal year, which ended on June 30 of this year, each of the endowment’s five asset classes saw positive returns, with public equities leading the pack at 16.3 percent. Interestingly, public equities were the only asset class to experience negative returns during the previous year. Within the public equities class, domestic and foreign equities did particularly well—each with returns exceeding 20 percent—while funds invested in emerging markets underperformed HMC’s internal benchmark, at 2.3 percent.

Although most peer Universities have yet to release endowment figures for FY 2013, Bowdoin, the University of Pennsylvania, and the Massachusetts Institute of Technology saw returns of 16 percent, 14.4 percent and 11.1 percent respectively. During a similar timeframe, the Standard and Poor’s 500 index, which tracks the stock market, gained approximately 18.5 percent.

According to Mendillo’s report, the team of investors prioritizes “growth, sufficient liquidity, and appropriate risk management” when managing Harvard’s endowment. In line with these aims, HMC, under Mendillo’s leadership since 2008, has made a series of changes to its policy portfolio, shifting toward increased portfolio allocation in equities, decreased allocation in fixed income, and renewed focus on natural resources to replace publicly-traded commodities.

Mendillo also noted that, in the past year, HMC has made key personnel changes, hiring Morgan Stanley executive Jake Xia as the new Chief Risk Officer and tapping Jameela Pedicini, a former manager at the United Nations, for the newly-created position of Vice President for Sustainable Investing.

“The HMC team produced strong results at a time when the revenue streams that have traditionally supported institutions of higher education have been under increasing pressure,” said University Treasurer James F. Rothenberg ’68 in a press release, adding that HMC beat its benchmark Policy Portfolio for the fourth consecutive year.