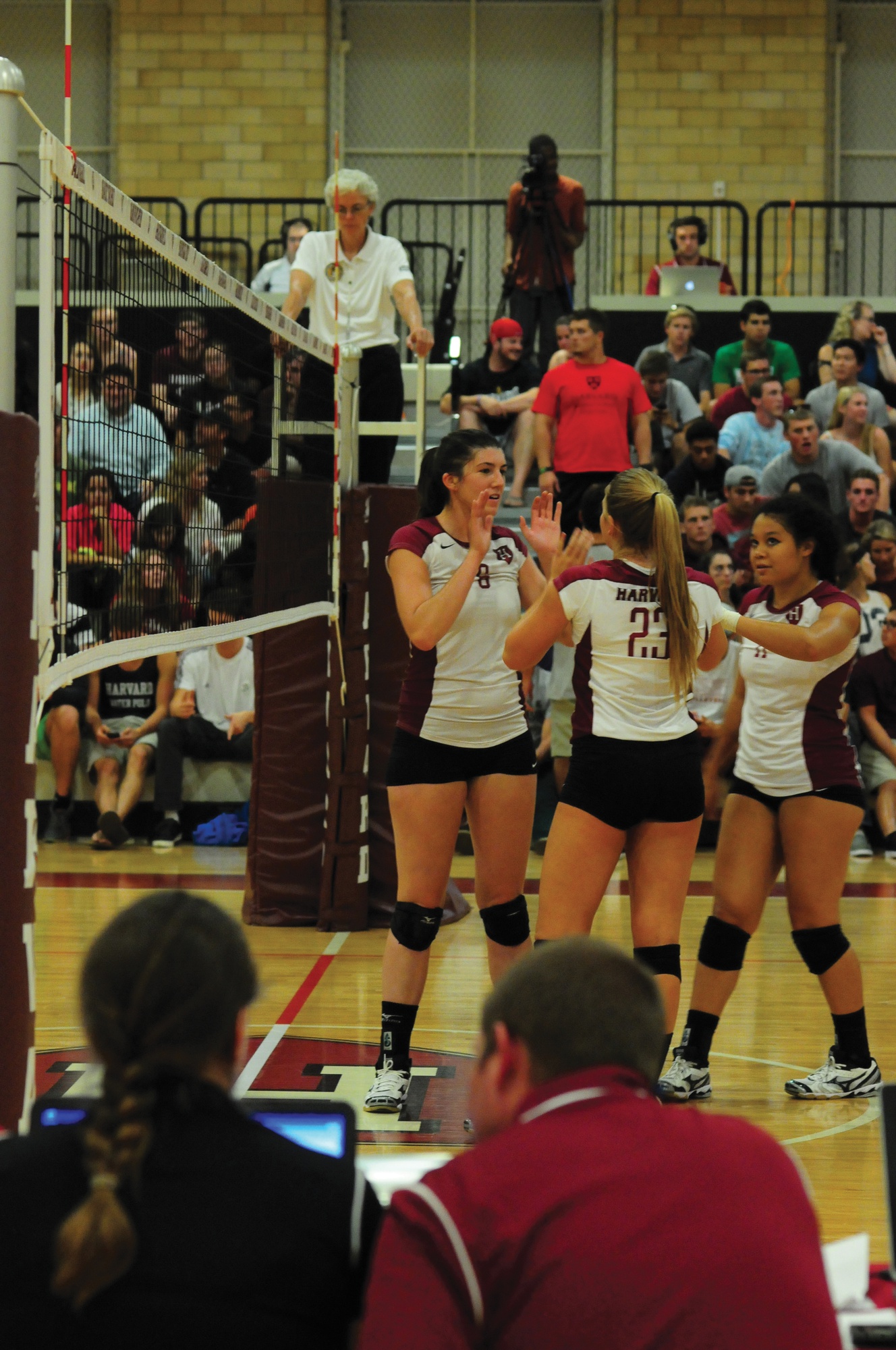 Last fall, the Harvard women’s volleyball team struggled to find its footing in non-conference play to open the year. In 2012, the team arrived in Hanover for its first Ivy League game, a loss at the hands of Dartmouth, with eight losses and just two wins under its belt.

This year, however, a different storyline has emerged for the Crimson.

In the team’s opening weekend, young starters and experienced upperclassmen worked through first set losses to top Holy Cross, 3-2, on Friday, and Hofstra, 3-1, the next night at the Malkin Athletic Center during the eighth annual Harvard Invitational.

Despite the graduation of Taylor Docter ’13 and Beth Kinsella ’13, anchors of last season’s team, Harvard (2-0) was able to hold an edge in hitting percentage through the whole weekend.

“We really just hit our stride and started playing our own system,” co-captain libero Natalie Doyle said. “Everybody calmed down and played relaxed and did their jobs. When everybody does their jobs, our system works, and we came out with the win.”

The Crimson starts the season with a 2-0 record for the first time since 2009.

It was a banner night for sophomore middle blocker Caroline Holte who finished the evening with 12 of 17 total blocks. Holte eclipsed her previous career high of nine blocks, set against Dartmouth in October 2012.

Junior Kristen Casey and sophomore Kathleen Wallace provided power at the attack, together notching 23 of the team’s 51 kills through four sets. Holte was third in kills with nine.

The first set was hotly contested, after Harvard saw a seven-point lead erased by a 10-3 Hofstra scoring spree. The Pride and Crimson traded points, with Hofstra taking the set, 28-26.

The second set was equally tight, with neither team holding a lead of greater than two points. A final kill by Holte gave the Crimson the set, 25-23.

The third and fourth sets also went to Harvard, as the Crimson offense hit at or above .125 for both sets to end the tournament in Harvard’s favor and prevent a fifth set.

It was down to the wire as Holy Cross pushed Harvard to five sets in the Crimson’s season opener. The Crusaders set forth a defensive effort that saw freshman libero Emily Popp tally 31 digs against Harvard’s attacking unit.

“The Holy Cross defensive team was very good,” Crimson coach Jen Weiss said. “It’s the best it’s been in a while, so hats off to them playing really scrappy.”

“I think we finally got our system in place,” Weiss said “That was our first time out to play; [Holy Cross had] already played. We just did a really good job in trying to stay disciplined.”

Freshmen Corinne Bain and Grace Weghorst were the two rookies to take the court on Friday night. Bain started at setter, Kinsella’s old position, while Weghorst was subbed in at outside hitter.

“The freshmen have been a great addition,” Weiss said. “They’ve made our practices a lot more physical and challenging. Corinne and Grace got to get out on the court, and they did a nice job. That was our expectation, and we welcome them. They’ve got a long career ahead of them.”

Bain made her debut with a double-double of 10 kills and a team-high 31 assists. Weghorst provided the second-most attacks on the team, 28 for the night.

“We’ve got a really deep team, and everyone is still working for spots,” Doyle said. “The freshmen are doing amazing in practice and absolutely killing it on the court. Corinne’s serve was monster today, and Grace really got up there. She’s got insane hops.”

The game was the first at Harvard, not just for the five freshmen on the team, but also for the Crimson’s two new assistant coaches, Arturo Rivera and Jeffrey Aucoin.