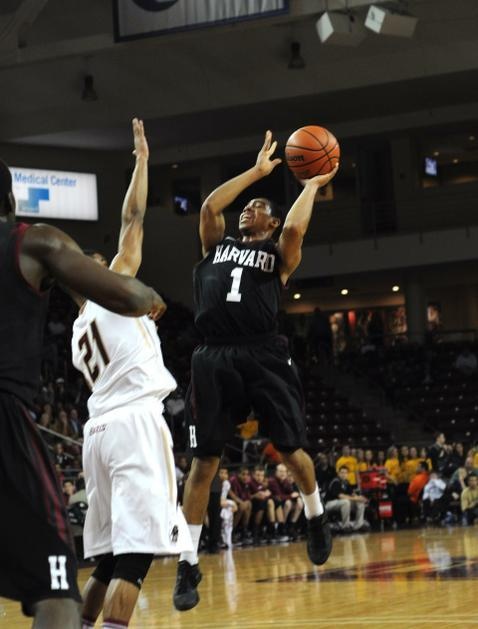 After losing a 14-point lead at Colorado in November, the Crimson watched its five-point advantage over Connecticut disappear during the final 20 minutes in Storrs, Conn., Wednesday. The Huskies opened the second half with a 22-10 run to grab the lead and held on for a 61-56 win. Harvard was outscored by a combined 30 second-half points against Connecticut and the Buffaloes.

Maybe Harvard has been rattled playing offense in front of large student sections at big schools. Maybe the Crimson’s lack of depth due to injury catches up to it in the second half. Maybe it’s just an issue of small sample size. Whatever it may be, Harvard cannot let the trend continue.

Last year, the Crimson closed big games. Against Princeton in league play and New Mexico in the NCAA Tournament, Harvard won the second half. It’ll have to start doing more of that against top-tier opponents if it wants to repeat last year’s success.

The biggest moment of Wednesday's game probably came before tip-off, when Harvard’s leading scorer, junior wing Wesley Saunders, was ruled out for the game with knee pain. He participated in the morning shootaround but ultimately could not play. How long Saunders will be out remains to be seen, but his impact on the team was evident in his absence.

The most obvious change was to Harvard’s rotation, which only utilized eight men while Connecticut rotated 10 players through. Without Saunders in the backcourt, sophomore Siyani Chambers and co-captain Brandyn Curry shouldered the biggest load with 38 minutes each on the floor.

Curry's 38 minutes matched the combined amount he had played over the previous six weeks. He missed a month of action with a achilles injury, and Harvard coach Tommy Amaker had been slowly upping his minutes since. Amaker had no choice but to ride Curry Wednesday.

Curry shot just 2-of-12 from the field, though he did come up with six assists and five rebounds. On the other side of the court, he was often tasked with marking Shabazz Napier, who finished with a team-high 18. Last year, Saunders held Napier scoreless for the first 32 minutes of the game, and the Huskies guard finished with just six points.

“Did [Curry's stamina] concern me somewhat? Yeah,” Amaker said, “But I think our guys are in pretty good shape, and certainly Brandyn has worked himself back to being able to play extended minutes.”

Chambers, on the other hand, thrived in Saunders’ absence. Looking to shoot more than usual, he finished with a game-high 21 points. Chambers looked like the best player on the court for lengthy stretches even though Connecticut’s starting backcourt is made up of two top-15 point guards.

"When Wesley went down, we were just going to do it as a team," Chambers said. "Somebody was going to step up."

That somebody ended up being Chambers himself. His performance was a big improvement over his last trip to Connecticut, when he had more turnovers (five) than points (three).

Harvard’s third starting guard, Laurent Rivard, came up big down the stretch. A four-point play followed by an old-fashioned three-point play on a put-back kept the Crimson alive in the final minute, but Harvard failed to get the potentially game-tying shot off in its final possession.

Ultimately, Saunders’ absence led to an odd combination of revelations. The offense sputtered at times, particularly late in the shot clock when Saunders often makes things happen by himself. Instead of that, the Crimson settled for 22 three-pointers (eight more than its season average) and shot just 36 percent from the field.

Yet, Harvard also showed it did not need Saunders to keep up with one of the best teams it will face all year. Chambers and Rivard stepped up offensively, while aggressive team defense helped the Crimson overcome the loss of its best defensive stopper. Assuming Saunders returns to full health soon, that bodes well for the Crimson’s future.

NO ONE KNOWS WHAT IT MEANS

When Harvard’s schedule, including a trip to a weak Alaska Shootout, was released, two games stuck out as opportunities for a quality win: at Colorado and at Connecticut. Win one if not both and the Crimson could make a serious run at a single-digit seed and potentially an at-large bid if it does not win the Ivy League title. Harvard won neither.

Now, the Crimson’s March fate could be determined by how much the selection committee values the way the Crimson lost, dropping close games without junior forward Kenyatta Smith in either game and without Saunders against Connecticut.

In the past, committee members have said they look at the ways teams handle adversity. That should give Harvard fans hope, but the Crimson sure could have made the numbers guessing-game a lot simpler.