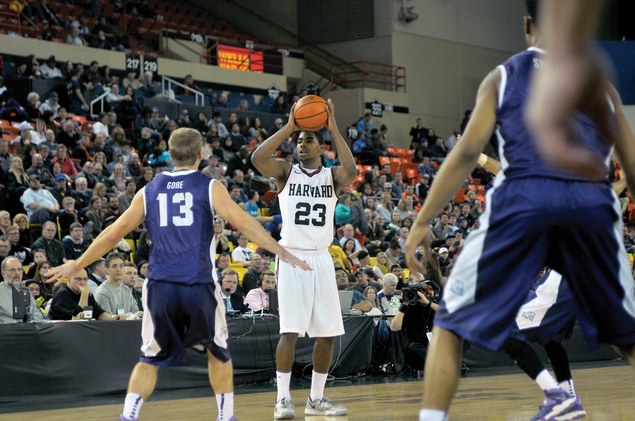 In his first game back after missing the previous two to injury, junior guard Wesley Saunders, shown here in previous action, converted only three of his 14 attempts from the field at Florida Atlantic on Tuesday night.
By Andrew R. Mooney, Crimson Staff Writer

In its final non-conference game of the season, the Harvard men’s basketball team (14-3, 1-0 Ivy) was undone by a shooting effort as cold as the weather it left behind in Cambridge, falling in an upset at Florida Atlantic (7-12, 2-2 C-USA), 68-53, on Tuesday.

What appeared on the schedule to be a comfortable road trip before conference play began in earnest quickly became something different as Harvard shot brick after brick.

After the game, the stat sheet displayed numbers that Harvard coach Tommy Amaker has never had to contemplate during his time in Cambridge. The Crimson shot 23 percent from the field and recorded just three assists, both record lows during Amaker’s tenure.

“It's one of those games where you're dumbfounded, a little befuddled,” Amaker said. “We haven't been like that this year. We normally have had stretches where we haven't played as well, but we've found ways out of it.”

Harvard entered the game ten days removed from the last time it took the court, a solid 61-45 victory over an improved Dartmouth squad. Whether or not the layoff was a factor, the Crimson seemed sluggish during an ugly first frame that saw the squad fall behind by as many as 15 points. The Owls played solid interior defense, challenging Harvard’s looks at the basket and recording seven blocks, but the Crimson was not having much luck on open shots, either. The visiting squad made only five of its 30 field goal attempts in the first half—16.7 percent—and trailed by nine at the break.

The Owls could have extended their lead even further in the first period had they taken better care of the ball; their seven turnovers allowed Harvard to keep the deficit manageable while the squad could not put the ball in the hoop.

In the second half, the Owls maintained their advantage through the hot shooting of freshman guard Marquan Botley, who hit his first six three-point attempts of the game, three of which came after halftime. His three-pointer with 13:52 to play in the second period gave FAU its biggest lead of the game, 45-28. Botley finished with a game-high 23 points.

The Crimson looked as if it might have finally shaken off the rust with a 9-0 run midway through the second half that cut the FAU lead to five with 5:36 remaining. But a crosscourt inbounds pass by D’Andre Johnson found Owls guard Jackson Trapp alone in the opposite corner for a crucial three-pointer to put FAU up eight. Harvard would get no closer the rest of the way.

“I thought [FAU] earned and deserved everything,” Amaker said. “They led from tap to buzzer. You give them a lot of credit, and for us, it was a very poor performance—the worst that we've had this season.”

In his first game back after missing the previous two to injury, junior guard Wesley Saunders—the team’s leading scorer—converted only three of his 14 attempts from the field, finishing with 11 points. His teammates in the backcourt, co-captain Brandyn Curry and sophomore Siyani Chambers, shot a combined two-for-15 and missed all eight of their three-point attempts.

The Crimson’s frontcourt did not fare much better. Freshman Zena Edosomwan was the only one of the group to make a field goal in the first half. The rookie submitted probably his best game in a Harvard uniform, turning in 11 points and a career-high nine rebounds, five of which came on the offensive glass. Outside of Edosomwan, the Crimson forwards collectively made two of their 19 shots.

Though it was not apparent on the scoreboard, there was at least some evidence on the court of why Harvard was a 10-point favorite heading into the game. The Crimson grabbed 21 offensive rebounds to FAU’s nine and got to the charity stripe 14 more times than the Owls.

But ultimately, Harvard’s failure to score from inside or outside doomed it to one of its most disappointing defeats in recent memory. The loss likely eliminates any hope the Crimson might have had for an NCAA tournament at-large bid, meaning that if the team is to return for another March run, it will have to do so by earning the automatic bid given to the Ivy League champion.

“It’s the first time I can recall where we really were just searching for long stretches,” Amaker said. “It’s a little disappointing. It’s hard to explain sometimes how that happens or why it happens, but [when] you've been in [college basketball] as long as I have been in it, you know it does happen.”

—Staff writer Andrew Mooney can be reached at mooney@college.harvard.edu.