At the Half, Men's Basketball Tops Big Green 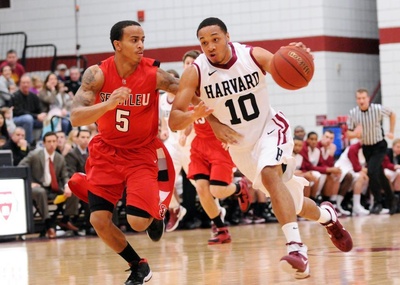 Brandyn Curry in action against FAU the last time the two teams met in 2011.
By David Freed, Crimson Staff Writer

A game after the worst shooting performance of Crimson coach Tommy Amaker’s tenure, the squad issued an authoritative response with an 80-50 victory over Dartmouth (7-9, 0-2) on the road—the team’s largest road victory of the season. After struggling offensively early, the team shot 79 percent in the second half and 66 percent for the game—its best shooting performance under Amaker.

Co-captain Laurent Rivard, who led the team with 15 points, said that, after the defeat to the Owls, the priority was not letting a single loss turn into a string of defeats.

“Coach said he was disappointed in the way we played and the effort that we gave [against FAU],” Rivard said. “We needed to make sure we didn’t play that way again and let that turn into a slide or a big slump. You see other teams—Wisconsin, Ohio State—dropping one game and it turns into four.… We didn’t want that happening to us.”

On the defensive end, the Crimson shut down a Big Green attack that was missing its key cog. With junior forward Gabas Maldunas, who had 23 points when the teams met a week ago, out for the season with a foot injury, Harvard held Dartmouth to 20 first half points and just 38 percent shooting for the game.

“Defense is our number one priority,” co-captain Brandyn Curry said. “Even when our shots aren’t falling, our defense should be there. I was happy with our effort out there tonight.”

Through eight minutes of play, however, the team had continued the mistakes that plagued it against Florida Atlantic last Tuesday. The Crimson missed four of its first six shots from the field and had nearly as many turnovers—five—as field goal attempts.

After a layup by sophomore wing Agunwa Okolie, Curry took over. Following a loose ball foul on the Big Green, Curry crossed over his mark at the top of the key and laid the ball up among three defenders. The senior picked off the ensuing inbounds pass and laid it up in one motion. After another Dartmouth turnover, Curry took advantage of a screen from junior forward Steve Moundou-Missi, knocking down a three-pointer to put the Crimson up by double digits. Curry and Harvard did not look back, taking a 37-20 lead into the break.

Curry finished with 14 points, one of four Crimson players in double digits on the night. After the win, Amaker called the team’s bench—which outscored its Dartmouth counterpart, 28-10—and its balance two of the squad’s most important strengths.

“[That run] was critical for us because we talk about how we can be a tough team to scout or defend because we have a couple different individuals who can step up,” Amaker said. “Whether it is Agunwa at Fordham, whether it is Brandyn down at Rice, we have had a number of different guys absolutely carry us and set things up for us in a positive way.”

The Big Green stayed in the game due to the efforts of sophomores Connor Boehm and Malik Gill. The pair combined for 17 of the team’s 20 points in the first half, making eight of 11 field goals as the rest of the team combined to make just one of 13. After Harvard took a 21-6 lead, Boehm and Gill were responsible for seven points in a 9-0 Dartmouth run to draw within six.

In the second half, however, the Crimson quickly did away with any hopes the Big Green may have had of a comeback. Harvard moved the lead to 24 in two minutes and opened up a 32-point lead with eight minutes to go, with Okolie and Moundou-Missi combining for four straight dunks.

After the win, Amaker stressed the importance of taking care of business on the road.

“The veteran players in our locker room, they recognize that every game is critical,” Amaker said. “Every team in every conference thinks like that, but we have no postseason tournament. Our older guys who have won this league three years in a row, and the younger guys are following their lead. I am very pleased to see that.”

—Staff writer David Freed can be reached at david.freed@thecrimson.com