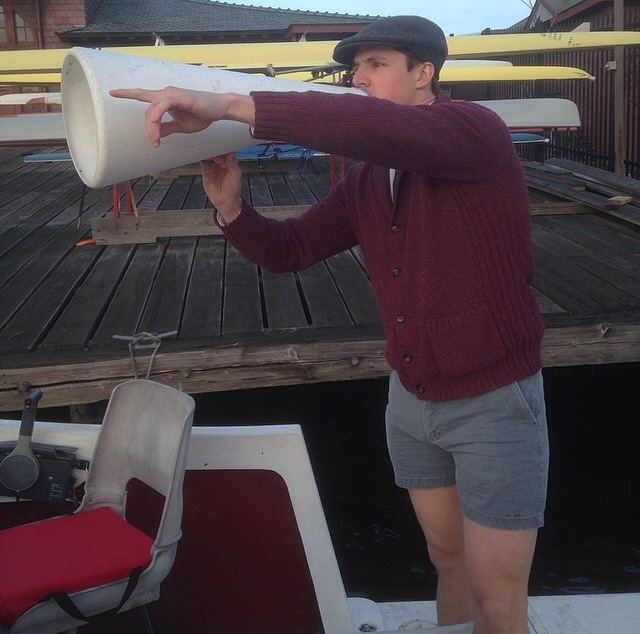 Ian Accomando (above) took over as coach of the Harvard men's lightweight crew team when coach Linda Muri stepped down earlier this year.
By Caleb Lee, Crimson Staff Writer

Sometimes circumstances evolve in a way few would expect.

That’s how some of the incoming recruits to the Harvard men’s lightweight crew of the Class of 2018 felt when they received word that longtime freshmen coach Linda Muri was leaving Cambridge for Hanover to take over as the head of women’s rowing for Dartmouth.

For freshman Daniel Bridgewater of New Zealand, the message came shortly prior to boarding a plane headed for Boston.

“We were informed about two weeks before we arrived on campus that [Muri] would no longer be the freshman coach,” Bridgewater said. “I’m not too sure exactly how I reacted—it was a bit of a surprise...though I could understand her reasoning.”

When lightweight coach Michael Bartman picked up Bridgewater at the airport, Bartman explained that it was still uncertain who would take the role of coach of the first years. Bartman had assumed the head coaching position just one year earlier, and here he was without a clear freshman coach to begin his sophomore campaign.

And yet, just over a month later, the storied Crimson rowing program had found its answer from within by officially naming volunteer assistant coach Ian Accomando as the full-time assistant charged with overseeing the freshman lightweights.

Even the new coach was caught a little off guard by the sudden shift, but Accomando has adjusted on the fly.

“It’s been a good year so far,” Accomando said. “It was a bit of a surprise that the opportunity opened up…. I was the intern for the last two years, so it wasn’t too crazy as far as the coaching [change] went.”

Circumstances, which brought former Big Green captain Accomando to Harvard and sent former Crimson coach Muri to Dartmouth, have a way of working themselves out in the end.

Though the change was swift and the goodbyes brief, Muri’s departure after her 13th year with Harvard underscored her importance to the team, both on the coaching and the recruiting sides. On both fronts, the former MIT rower had left her mark.

“I have a strong personal connection with so many of [my rowers], and to leave that, that’s really hard,” said Muri in an interview last month. “It’s harder to stay in touch in that same way without the connection of being at Harvard anymore.”

Now sophomores, members of the last group of freshmen Muri mentored point to her leadership as one of the main drivers of their success. Less than a year ago, the Muri-guided lightweight fours took silver at the IRA National Championships, and yet just a few months after the school year wrapped up, their coach was gone.

It quickly became clear how many Crimson rowers Muri had influenced over the years. Sophomore coxswain James Dreben is one of them. Beyond the impact of one’s average coach, he stated that Muri had a presence that was immediately felt from day one and could inspire.

“One of the main reasons I wanted to do crew here was Coach Muri, just because she is such a great personality and coach,” Dreben said. “It’s definitely a loss to the program to see her go.”

Even with Muri gone, her shadow is still present with the newest class of recruited rowers. Many had spoken with the now-Dartmouth coach at some point during the recruiting process. For some recruits, Muri had been the initial reason they came to Harvard.

Among her many roles, Muri served as the recruiting point person for the team, reaching out to potential candidates such as current-freshmen James Dupuis and Bridgewater long before they ever stepped on campus.

“[Muri] was really the coach that I was recruited [by],” Bridgewater said. “I started talking with her about two years ago, sent emails, and then I had my official visits in 2013.”

As the newest additions to the Harvard rowing family unpacked their bags and completed their training regimens upon arriving on campus, there lingered an air of uncertainty. It was August, the trademark Head of the Charles event was only two months away, and there was no freshman coach.

Not to mention that dozens of potential walk-ons, many of whom had never pulled an oar before, needed to be tutored before the season picked up.

Needless to say, there was some urgency surrounding the freshmen that hadn’t been seen in years after over a decade of stability under Muri.

With the sudden coaching changes at the top, there existed an inevitable apprehension regarding the start of the season. But those fears were also balanced by limited optimism and trust in the system.

“At first, I was a little anxious because for about three weeks we didn’t know who our coach was,” Dupuis said. “But I took comfort in that the Harvard athletic department would pick a very qualified coach who could fill the position.”

Though the first few weeks of the season saw Bartman delegate some of the freshman-related responsibilities to Accomando, the head coach delayed officially naming someone to the position for a short time as Accomando learned the ropes of the job. However, the former Dartmouth standout had established himself as a worthy assistant coach through his two years of volunteering and had also met some of the recruited freshmen previously.

“I actually knew [Accomando] before from when I visited the campus during my official visit and unofficial visits as well,” Dupuis said. “From first impression, he seemed like a young, relatable guy and as it turns out, he really does know his stuff.”

Since his appointment to the post, Accomando has done little but impress his freshmen rowers and instill in them the knowledge that he had gained through his own collegiate experience.

Though the newly-appointed Accomando may not have the coaching pedigree yet, he’s displayed the confidence necessary for the job.

“Rowing is rowing, and so I feel like I know what I’m talking about,” Accomando said. “I don’t have the gravitas that Linda had, but I think I can connect with the guys pretty well. It’s been a good transition—[the freshmen] are good learners, and they’ve made it easier for me by just showing up with the right mentality every day.”

Looking back less than a month and a half ago, the coaching situation seems considerably more secure now than before, with Accomando taking the opportunity in stride and with confidence.

“The reality has really exceeded expectations,” Dupuis said. “At first, I didn’t really know what they were...if anything, I didn’t know what to expect. But then the first day, Accomando grabbed hold of the reins and drove us into the right direction.”

Part of Accomando’s appeal has been his relative youth. Just a few years before, the assistant coach could be seen wearing Dartmouth green on the water, competing and even beating the team he has now embraced as his own.

As opposed to letting his lack of coaching experience define his performance, Accomando has made a point of leveraging his relatively recent competition experience to his advantage.

“I think [my recent  Dartmouth rowing career] helps me connect with the crew, and not just the freshmen, but all the underclassmen on the team,” Accomando said. “But it works both ways—I know when they’re trying to sneak one by, and I know when I need to back off and give them a little space.”

Though Accomando discussed the major improvements his Dartmouth squad made in his four years on the team, he stayed away from highlighting individual performances, which included two second-team All-Ivy accolades and a silver medal at the 2012 IRA National Championships.As a result, the newest permanent member of the Crimson coaching staff is just a few years removed from having competed in many of the same events in which his athletes will row in just a few weeks.

And while personability and poise under the watchful gaze of the newest Harvard students has been key in the first month and a half of the season, Accomando’s recent experiences rowing in big races has given him instant credibility.

“A lot of the workouts that he plans, he’s also pulled before,” Dupuis said. “He really knows all the events [and] how the competition works—he’s done all these races before and done extremely well at them...as captain of Dartmouth crew.”

Thus far, the success of the hire has been seen through the positive affirmation from the rowers, many of whom originally pledged to join the team because of Muri’s work but now find themselves in a transition period of sorts. And though their expectations may have changed upon their initial arrival at Harvard, the new reality has shown itself to be good in its own fashion as well.

“I couldn’t be happier [where I am],” Dupuis said. “Accomando really excited me for the entire rowing scene and has such an ability to make things relatable. He makes practices fun to go to and makes us always excited to row under his wing.”

As the the season inches closer to the major competitions of the fall, supporters of Harvard crew can be assured that the tutelage of the freshmen rowers is in able hands for the near future.

Looking ahead, Accomando also expressed the desire to remain with Harvard, stating that he “wanted to earn his position” at the school.

Bartman also voiced his support for his assistant, commending Accomando for his work thus far this season.

“Everything is going well and the transition of Ian Accomando into the assistant position has been very smooth,” said Bartman in an emailed statement earlier in the month. “He was already the volunteer coach for the past two years, so he is very familiar with the program.”