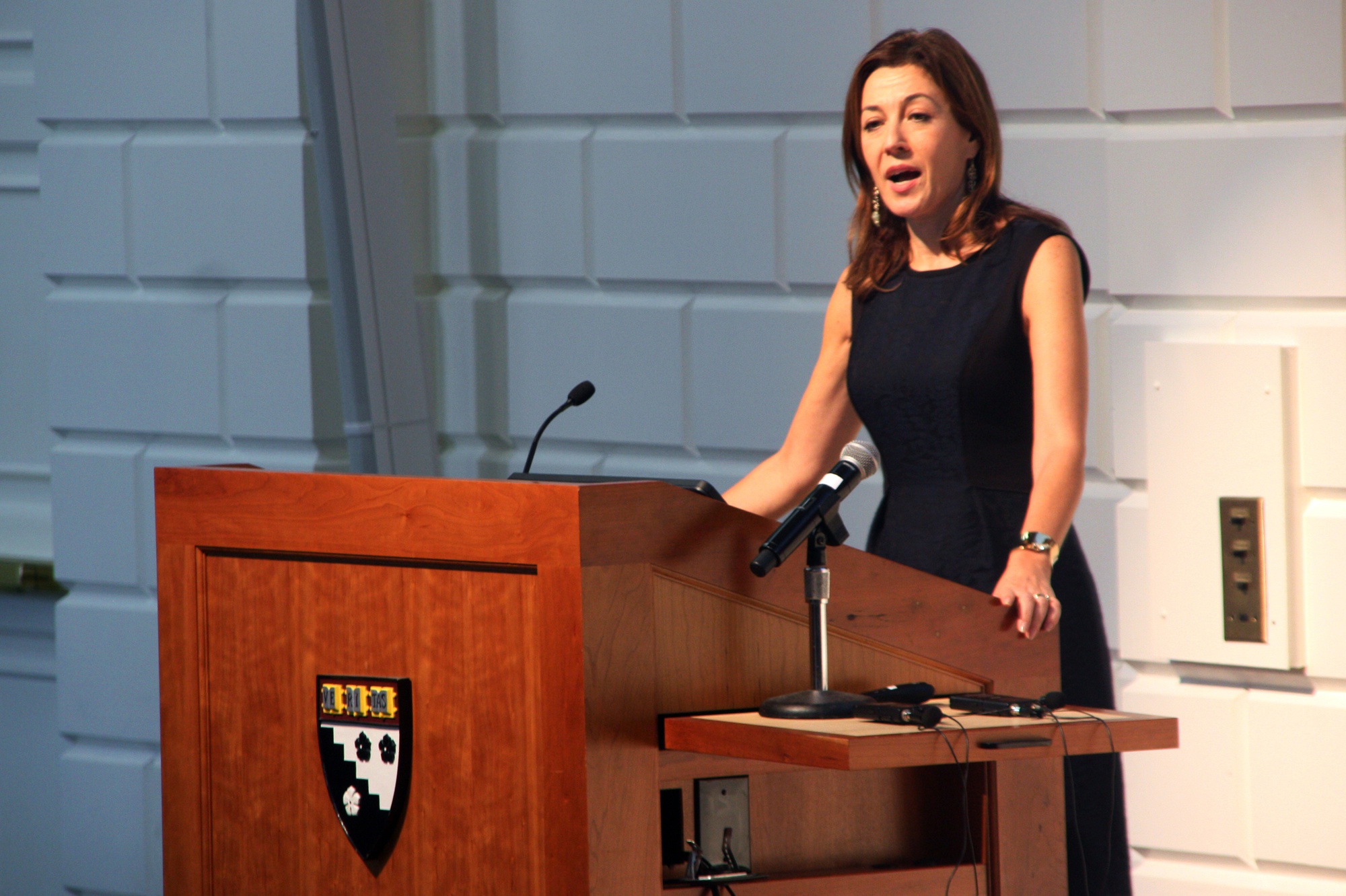 Eva A. Millona, Executive Director of the Massachusetts Immigrant and Refugee Advocacy Coalition, speaks at the Graduate School of Education on Friday morning. Millona stressed the importance of providing support to immigrant youth and encouraging them to apply for the Deferred Action for Childhood Arrivals program.
By Luca F. Schroeder, Contributing Writer

The Harvard Graduate School of Education hosted a preview last week of an upcoming media campaign that aims to encourage young undocumented immigrants to pursue their educational goals and includes contributions from Harvard students and faculty. The preview event, which took place Friday in Askwith Hall, came three days after an undocumented Harvard student was granted a humanitarian visa to return to the United States from Mexico.

The national campaign, led by the Televisa Foundation, intends to raise awareness about the government’s Deferred Action for Childhood Arrivals program, which enables some undocumented immigrants who arrived in the U.S. at an early age to avoid deportation and obtain work authorization. The campaign will publicize the stories of several DACA beneficiaries through a series of short videos, some of which will air on Univision starting in late November. The videos will initially be made available in English, Spanish, and Chinese.

Ryan gave introductory remarks at the event, speaking of the larger ideals motivating both the Ed School and the “Think About It” campaign. 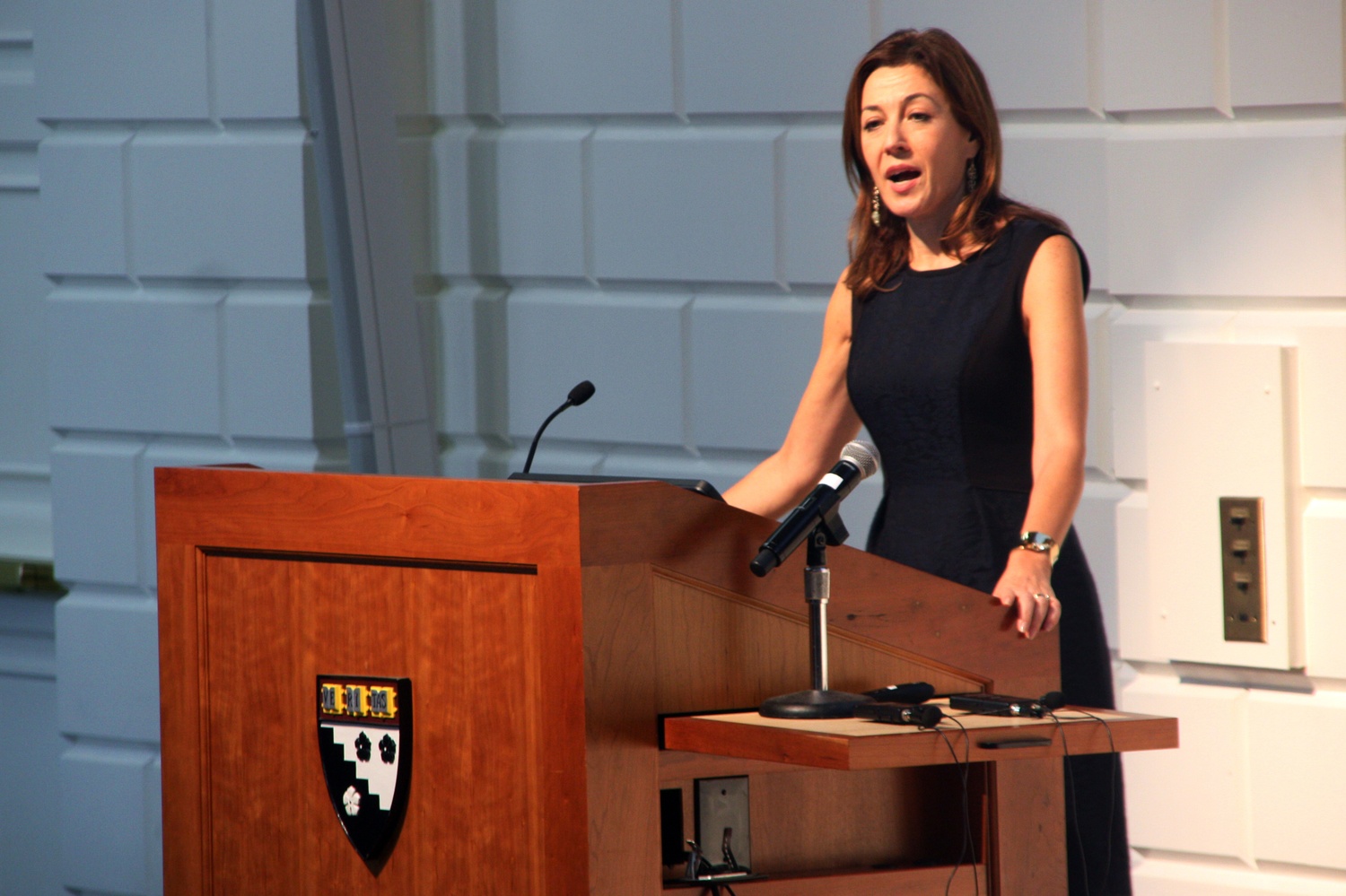 Eva A. Millona, Executive Director of the Massachusetts Immigrant and Refugee Advocacy Coalition, speaks at the Graduate School of Education on Friday morning. Millona stressed the importance of providing support to immigrant youth and encouraging them to apply for the Deferred Action for Childhood Arrivals program. By Connie Yan

“The fundamental belief that motivates the work of all of us here,” he said, “is the belief that all children, regardless of the color of their skin, who their parents are, where they live, are entitled to and deserve a high-quality education.”

Though far from perfect, he added, DACA has offered “significant” opportunities to undocumented immigrants and has freed many from the “legal limbo” that came after Plyler v. Doe, when the U.S. Supreme Court ruled that undocumented immigrants were able to go to school but were unable to gain access to work, driver's licenses, healthcare, and higher education.

The other speakers at the preview concurred with Ryan, discussing the potential of DACA and the extraordinary change it has enabled. But each speaker also acknowledged that immigration policy and DACA implementation had plenty of room for improvement.

“DACA is a band-aid solution,” Millona said. “It’s not the solution we’d like to see.”

Millona said she was hopeful, however, that a more permanent solution, such as the passage of the DREAM Act, would come soon. “It’s a matter of time, it’s a matter of when, it’s not a matter of if,” she said.

Also present at the event were several of the students profiled in the campaign videos, who shared their stories and their rationale for joining the campaign.

“Growing up as a dreamer, as undocumented really, there’s a point where you kind of  hide yourself because you’re scared of what can happen—you being deported, your parents being deported,” said Sandra Y. Sandoval, an immigration activist featured in the campaign. “But you can’t always live in fear—if anything, you should use your story and your experience to help other people.”

Anahi D. Mendoza Pacheco ’15, who also stressed the possibilities provided by DACA, was profiled in the videos as well.

“The epitome of the ‘American dream’ is attending Harvard,” she said. “I wanted to be a part of this campaign to show people that it is possible to attend an elite university, even if you’re undocumented.”