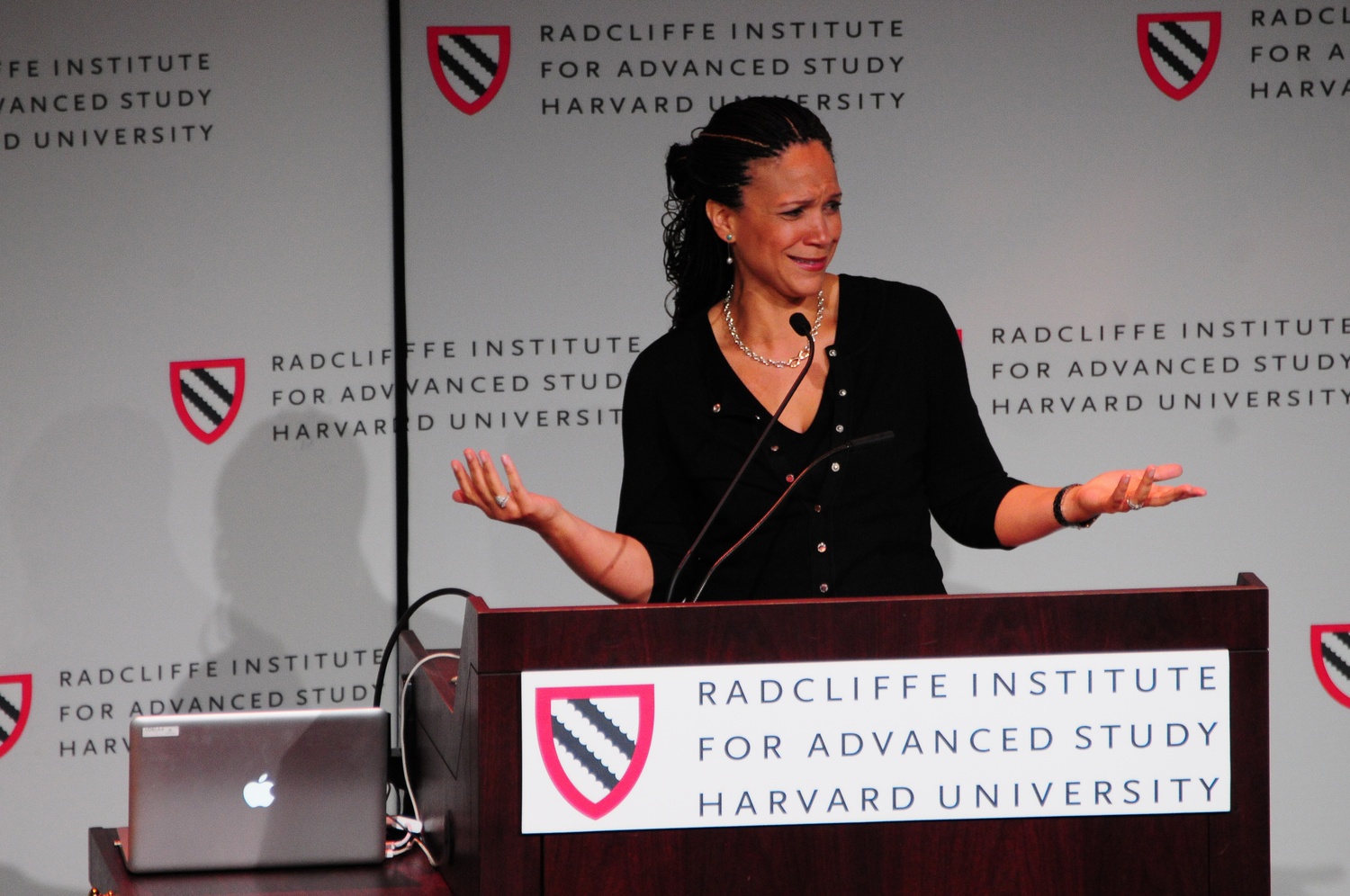 Melissa Harris-Perry, a professor of Political Science at Wake Forest University, spoke Thursday afternoon at the 'Who's Choosin' Who?' lecture at the Knafel Center. By Christine E Mansour
By Victoria Zhuang, Contributing Writer

Melissa Harris-Perry, host of the eponymous weekend MSNBC news show and a political science professor at Wake Forest University, discussed disenfranchised American voters, the role of minority groups in a democracy, and her life as a public intellectual Thursday.

Nearly 400 attendees crowded into the Radcliffe Institute’s Knafel Center to hear Harris-Perry’s talk, given as this year’s Maurine and Robert Rothschild Lecture.

At the event, Harris-Perry emphasized the importance of protecting the political interests of women and racial minorities.

“To live in a democracy is to have the right to govern, not to simply be governed…to lose without fearing that winners take all,” she said in her opening remarks.

Harris-Perry spoke of recent breakthroughs by women and African Americans in politics. She cited not only President Obama’s 2008 election as the first black president, but also advances of women like Hillary Clinton, Sarah Palin, and Nancy Pelosi to unprecedented positions of political visibility.

Despite this progress, Harris-Perry said, difficulties remain. She particularly discussed the ongoing debate over abortion, and “felon disenfranchisement”—the exclusion of otherwise eligible voters due to conviction of a felony—as barring many black men from influencing election outcomes.

“We make progress in fits and starts, and we go back,” she said.

Answering questions from audience members after her address, Harris-Perry discussed balancing life in the media and academia as a black woman and feminist.

“I share a socially-constructed identity with many people who are marginalized, but I’m no longer a marginalized voice,” she said. “One of the things that has been powerful and frankly difficult [for me] to navigate is a shifting sense of identity.”

She recounted an incident when she wore a pair of tampon-shaped cotton earrings during her TV show to bring attention to the abortion restrictions passed in Texas, inciting outrage among viewers.

“For me, that reaction is all about the disgust about women’s bodies, ” she said. “Tampons are ‘disgusting’ because they might go inside a woman’s vagina,” she said.

Audience members said they were impressed by Harris-Perry’s forceful personality.

“[She’s] definitely the kind of professor that we would want here at Harvard in a seminar setting,” said Yusuph O. Mkangara ’17. “I enjoyed her candid comments.”

Jamarcus Purley, a researcher at the Harvard Family Research Project, said he was pleased to find variety in the composition of audience members.

“When you talk about race and gender, you tend to see a small society participate, due to a lack of identification with the conversation,” he said.

“I thought her candidness, when she spoke about marginalized communities, shed a great deal of light on [subjects] that you typically don’t hear about in communities of privilege,” he said.