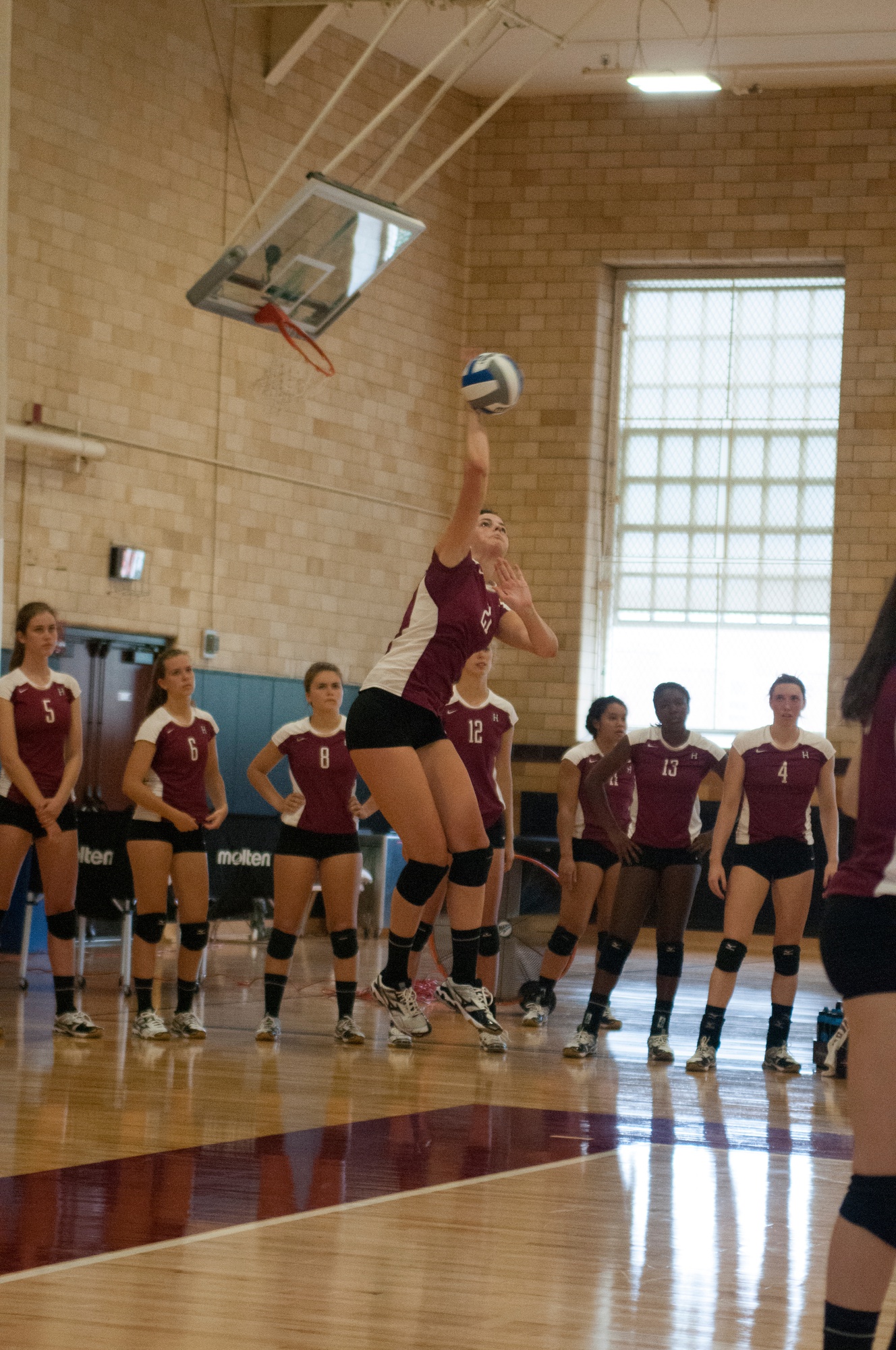 The Big Green had taken the other meeting between these two earlier on in the season and in its home gym, the Crimson very much felt like this was an opportunity for revenge.

“This game was super important to us because they beat us the first time around,” senior co-captain Caroline Walters said. “We didn’t think they should have, so we came out with a vengeance tonight.”

“Last weekend, we came back down by two [sets] against Penn, and that gave us a lot of confidence to go on and sweep Princeton,” Hansen said. “We were really ready to beat Dartmouth [tonight] from the confidence of last weekend. We came out ready to play because we really wanted to prove [that] we were the better team.”

The home team came out swinging from the get go and did not let up all night as Dartmouth simply wilted under the power of the Harvard offense. Any time the Crimson was able to control the ball and pass it to one of their numerous attacking options, there was a feeling in the crowd that the point was going to be over soon. There was an easy confidence about the home team, and after an edgy first few points, an 8-0 run midway through the first set behind the serving of Walters set the tone for the night.

“Once we started playing, we realized everyone was on and playing well together and playing together,” Walters said. “We loosened up and kept that confidence going throughout the game.”

The floodgates opened and the rest of the match was an onslaught. Middle blocker Caroline Holte had a career night. The junior has averaged 2.05 kills per set this season but laid down 11 on only 15 attempts to go with five blocks. Sophomore outside hitter Grace Weghorst also came into her own with an 11-kill barnstormer, mixing in four aces from her potent serve to boot. Stalwarts Walters and sophomore setter Corinne Bain also feasted with seven kills apiece.

Great offense can only come from great defense, which Walters credited for the offensive output.

“[The offense] actually started with our defense,” Walters said. “We had amazing digging and so stopped all of their attacks, and we definitely just spread out the hits, and there were a lot of open spots on the block. Everyone was just really on.”

After Harvard steamrolled to a 25-13 first set win, the second set was a more even affair. While the offense still hummed to the tune of a .500 killing percentage, the defensive prowess slacked a bit for the Crimson. The Big Green was stifled in the opening set, but some valiant hitting by Dartmouth sophomore Emily Astarita kept things close with the visitors in striking distance after a mini-run down 16-17.

Serving was another area of prowess for the Crimson. Hansen added that Big Green often struggled to defend because they were out of position after a big Harvard serve.

“We had them out of system a lot because we were serving aggressively,” Hansen said. “They couldn’t really match our offense.”

The third set was over really before it began. The Dartmouth squad appeared simply deflated by the end of the night. Harvard never let up on its way to a comfortable 25-18 set win to wrap up the match.

It’s fairly rare to see three set victories in what is on a weekly basis a hard-fought and competitive Ivy League. However, volleyball at its core is a game of runs and when a team gets going, it can become unstoppable.

That was Harvard on Friday night.

“I think we had one of our best matches of the season,” Hansen said. “We had our [stuff] together.”