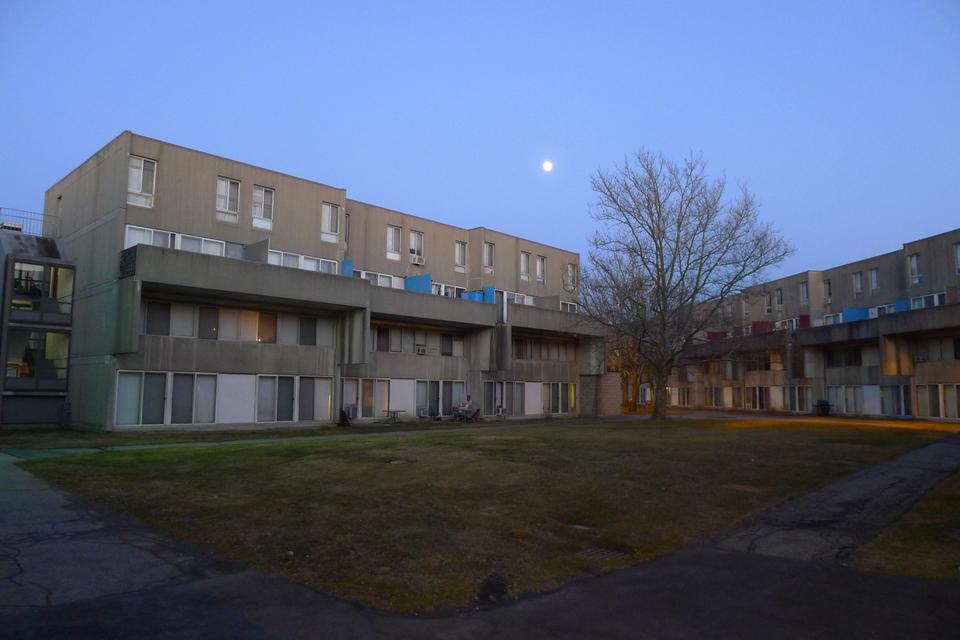 The old Charlesview apartment complex is scheduled to be vacated once construction on the newer Charlesview Complex is completed.
By Karl M. Aspelund, Crimson Staff Writer

The meeting’s primary intention, though, was to give updates on the upcoming demolition of the old Charlesview apartment complex adjacent to the Business School.

Interior demolition at Charlesview will be completed in early November, according to Edward G. LeFlore, a consultant hired by the University for construction management. The property was obtained in a land swap in 2007 and its residents relocated in the summer of 2013. The interior demolition allows for a quick dismantling of the walls and foundation to begin afterwards.

Demolition will continue through the spring of 2015, with the expressed goal of clearing the land by the completion of the Barry’s Corner Residential and Retail Commons, which broke ground in Dec. 2013.

Construction will then begin on the site starting in late 2015 with a new street to be called Academic Way. It will cut through the property and also assist with traffic mitigation for the construction of the new School of Engineering and Applied Sciences campus in 2016 and 2017, according to Kevin Casey, the University’s associate vice president for public affairs and communications.

Harvard’s Institutional Master Plan for Allston set aside much of the site for a six-to-nine-story administrative building, known as a “gateway site.” However, Casey said that interest from faculty has initiated an internal discussion among University administrators as to whether the building should be used for academic purposes instead.

He added that the gateway site’s intended use will be determined by the time of the next task force meeting in late December.

Comments from Allstonians, however, mostly focused on the Barry’s Corner project across the street from the old Charlesview complex.

Harvard leased the 2.67-acre site across the street from the old Charlesview to Samuels & Associates, its real estate partner for the project. Parking for the Charlesview project is all on-site, while Harvard asks that Barry’s Corner workers pay a $15 daily parking fee at a nearby garage. Most neglect to do so, filling the streets with cars, according to community members.

Although Casey and LeFlore confirmed that Harvard was working on a response after receiving a letter on the subject this week, Allstonians were not satisfied, saying that they had brought these concerns before the University early in the planning process.

“To say at this meeting that you are looking at the parking issue, which is deeply important to the community, and that you will plan for the future when you have had over a year to review it is simply disappointing,” task force member Bruce E. Houghton said.

Other task force members also mentioned property damages from construction vibrations from the Barry’s Corner site, as well as community concerns about safety at nearby Library Park, citing a lack of police surveillance that was especially worrisome as Harvard works on an abutting Rena Park, which will open in 2015.

Allstonians were clear in their desire for extra meetings regarding the new developer for the last phase of the new Charlesview project and regarding solutions to the Barry’s Corner issues. Officials from Harvard and the Boston Redevelopment Authority, which hired the task force, agreed to host more meetings.

“Even while Samuels & Associates is operating its own project with its own community outreach,” Casey said in an interview after the meeting, “Harvard is very much a partner and has an interest in the project going well and responding to the community’s concerns.”