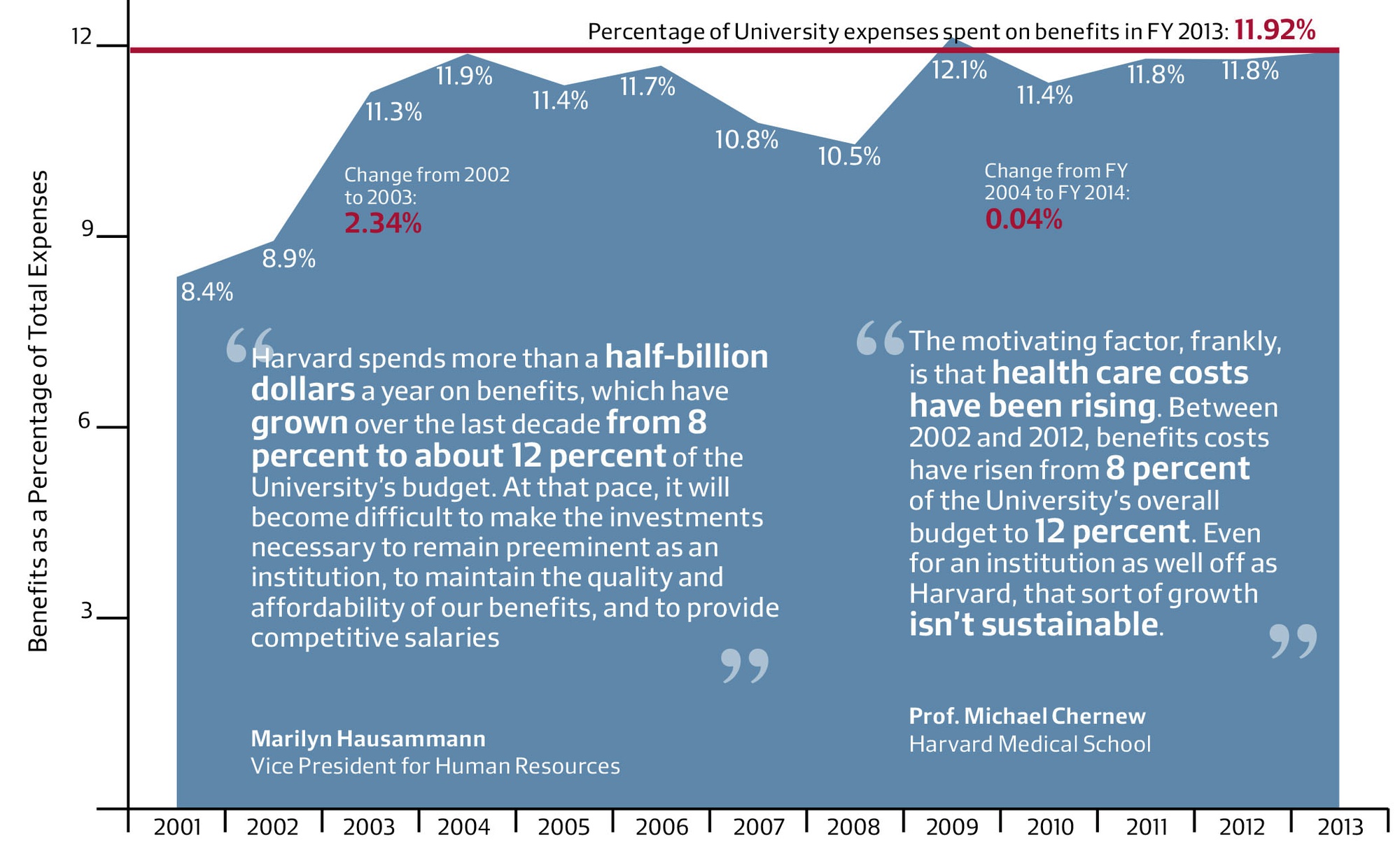 Last month, when Harvard announced that it would restructure the health benefit packages it offers to non-union employees in an effort to control costs, University officials sang one statistic in unison: the benefit plans, they said, had ballooned in expense to account for 12 percent of the University’s annual budget, up from 8 percent ten years ago.

“[H]ealth care costs continue to be a challenge for us. Harvard spends more than a half-billion dollars a year on benefits, which have grown over the last decade from 8% to about 12% of the University’s budget,” Vice President for Human Resources Marilyn Hausammann wrote in a letter to employees detailing the changes.

The statistic was meant, officials said, to illustrate an acknowledged reality in the benefits sphere: healthcare costs are rising fast, and so are institutions’ insurance liabilities.

Yet a closer look at annual financial reports reveals that the “8 percent to about 12 percent” claim used as a top justification for the changes—including the introduction of a deductible and coinsurance—misrepresents the actual changes in benefits costs.

The jump in costs that Hausammann described did take place, but over the course of only two years and more than a decade ago. Since that increase in the early 2000s, growth in benefits as a proportion of Harvard’s budgetary expenses has been relatively flat on average.

While benefit liabilities jumped from 8.93 percent of Harvard’s budget in Fiscal Year 2002 to 11.27 percent of the budget the next fiscal year, they remained largely steady in the ten-year period referenced by Hausammann. In the FY03-FY13 interval Hausammann cited, the percent-change of benefits as a share of the total budget was an increase of 5.8 percent, not 50 percent. 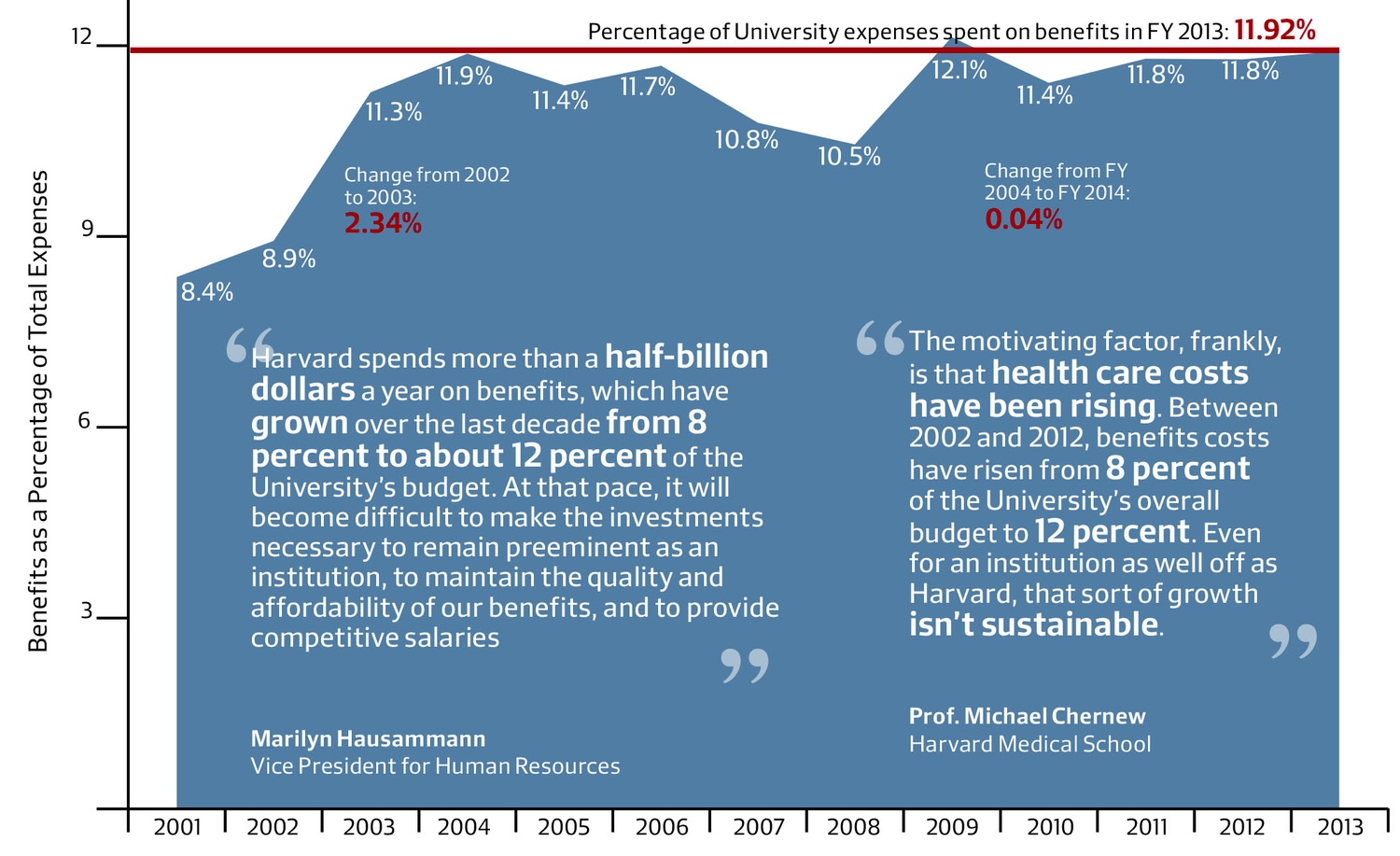 After Hausammann did not return multiple requests for comment throughout the day Monday, University spokesperson Jeff Neal contacted The Crimson late Monday night with a statement from Hausammann. In the statement, Hausammann referenced Harvard’s 2011 financial report, a section of which read: “benefits as a percentage of the University’s overall expenses... increase[d] from 8% in fiscal 2001 to 12% in fiscal 2011.” Hausammann said that that statistic informed the work of the benefits committee.

“As the basis for the UBC's deliberations, I used this fact in a communication about the benefit plan changes,” she said. “I should have been more precise about the exact timeframe that specific growth occurred and will be more clear in future communications.”

Hausammann added that the benefit “increases have occurred despite a number of important administrative changes, along with some modest plan design changes, that helped constrain cost growth rates and moderate premium increase growth for faculty and staff.”

Michael E. Chernew, a professor at Harvard Medical School and the chair of the University Benefits Committee, said Monday afternoon that the group relied on data provided by Hausammann and Harvard’s human resources department, which Hausammann leads. The benefits committee played an advisory role in the policy changes, according to Chernew.

Bill Jaeger, the director of the Harvard Union of Clerical Technical Workers, criticized the University for using the statistic when presented with the discrepancy. HUCTW workers are not affected by the changes in benefits but have recently renewed conversation with administrators about their health plans.

“We were deeply disappointed and confused as to how the [number] came out of a committee that’s chock full of economists who should have known from looking at it that’s a problematic number,” Jaeger said.

Chernew added that the group was tasked with meeting a financial target set by the University, not with debating the merits of the target. He said he was not sure if a more accurate number would have changed the committee’s thinking.

“Would I rather the number not be a number that’s gotten so much attention, sure I would. But would it have changed what the committee did given the target we have given? No, I don’t think it would have,” he said, emphasizing that even with the disputed numbers, it is clear that health care costs are rising.

Brigitte Madrian, another member of the benefits committee and a professor at the Kennedy School of Government, also said that the specific numbers probably does not change the equation, adding she was not involved in gathering the statistics.

The changes in non-union health plans center on the introduction of a $250 deductible at the point of care, except for routine office visits and tests. Before the changes, there was no deductible. Additionally, under the new plans, after thresholds of $250 per individual and up to $750 for a family, enrollees will shoulder 10 percent of costs. Before the changes, plans did not ask for an enrollee contribution. Co-payments for emergency room visits also rise under the new plan.