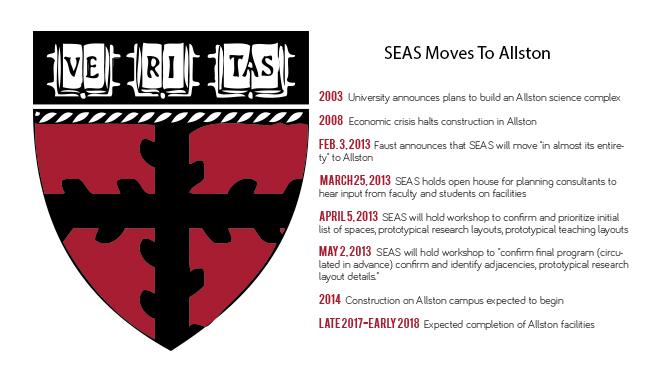 A class scheduling task force convened last year is considering proposals to change the duration and timing of classes offered by the Faculty of Arts and Sciences in light of the impending move of portions of the School of Engineering and Applied Sciences to Allston in 2018.

The task force, composed of faculty members, staff, and students from FAS, is currently soliciting feedback on three proposals and may decide to bring the options to the full Faculty for discussion in the spring, according to several members of the task force.

In two of the proposals, the majority of FAS classes would meet in 90-minute blocks twice a week, over four days. Sections and classes such as studios and seminars that require longer meeting times would take place on a fifth day—which would be Wednesday in one proposal and Friday in the other proposal, according to Computer Science professor Greg Morrisett, who is a member of the task force.

The third proposal, which would make few scheduling changes, is “very similar” to the current FAS class schedule, Morrisett said.

The alternative schedules aim to address long-standing concerns about overlapping classes and course duration as well as account for the increased distance that students and faculty members will have to travel once the SEAS Allston campus opens.

According to Area Dean for Environmental Science and Engineering Steven C. Wofsy, the current schedule was designed for “stand-up chalk-and-talk classes” and does not sufficiently accommodate the increasing number of hands-on courses, which often demand longer class periods.

“Today, many courses teach on Monday and Wednesday for 90 minutes, and yet they’re really supposed to be teaching Monday-Wednesday-Friday for roughly an hour instead,” he said. “They end up conflicting with two Monday-Wednesday classes instead of just one.”

The two significantly altered schedules would also introduce a 15-minute passing period between classes, as opposed to the current seven-minute gap, to facilitate students’ commute between consecutive courses, Morrisett said.

The task force, co-chaired by Dean of Undergraduate Education Jay M. Harris and Deputy Provost Peggy Newell, is also considering shifting the schedule of classes that take place in Allston up by half an hour, according to Fawwaz Habbal, executive dean for education and research at SEAS and another member of the task force.

“The idea behind it is to have time for the students to be able to first move around between here and Allston,” said Habbal, adding that the task force estimated that the time it would take to transition between campuses would be between half an hour and 40 minutes.

Although the task forces were formed after the announcement that parts of SEAS would move to Allston, Morrisett said that the developing campus was not the only reason for the review of the class schedule.

“Even if Allston wasn’t happening, issues like the passing time to get from one class to another...should be fixed,” he said.

To reach its proposals, the task force reviewed “an enormous amount of data” on classroom usage and considered “a number of different options” based on the views of campus groups, including student groups and athletes, according to Morrisett.

However, he made clear that the process was not yet complete, and that the current set of alternative schedules could change with feedback.

“Those options still need to be discussed with the Faculty, and we need to get more feedback to decide whether they’re viable or not,” he said. ”And then, of course, that would need to be taken to the Faculty as a whole to vote on.”