The State of the Student Body 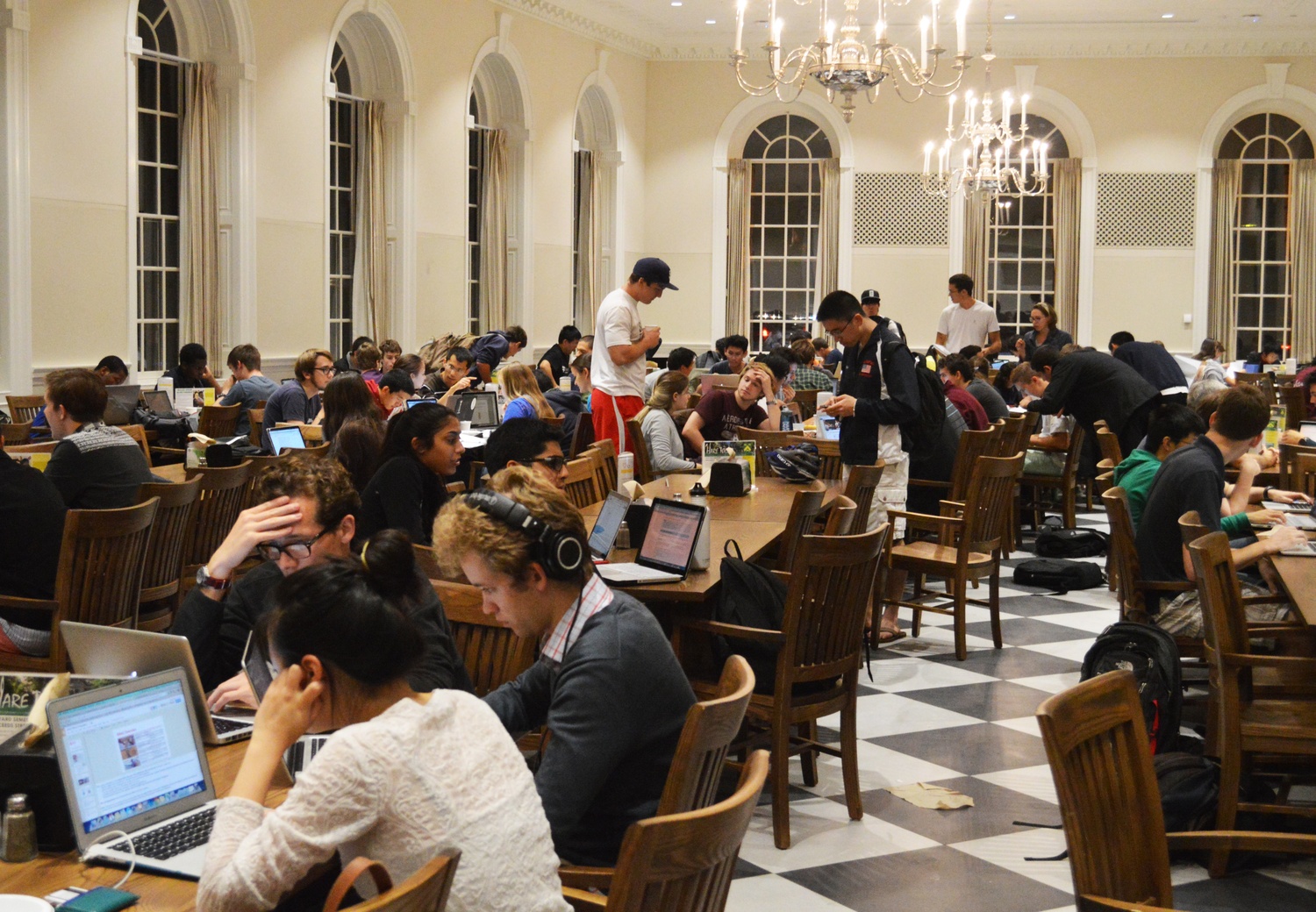 Officials at University Health Services found that a significant number of undergraduates continue to face stress, suffer from sleep deprivation, and exercise infrequently despite an increased focus on institutional programs and resources related to mental and physical health. By Christopher J Magnani
By Quynh-Nhu Le and Zara Zhang, Crimson Staff Writers

“It’s terrible—neck pain, shoulders, my eyes get tired, pretty much everything you can think of,” Masahiro L. Kusunoki ’17 said, describing the physical pain he has been dealing with since his freshman year at Harvard.

Long hours of working over his computer and carrying heavy books in his backpack has strained multiple parts of Kusunoki’s body, though he has no diagnosed chronic condition. During his freshman year, Kusunoki said, he experienced insomnia and often slept only three hours a night—a condition he said only started when he arrived at Harvard.

While Kusunoki’s experience may not be representative of the entire student body, it sheds light on the physical cost that can come with studying at an institution like Harvard.

Although much attention has been paid to stress-related mental health, the University has also made great efforts in recent years to bolster physical wellness resources. But while students applaud the changes, they continue to struggle to fit them into a life filled less with sleepless nights and more with a constant buzz of anxiety—an  indicator, student activists say, of the need for a broader cultural shift spearheaded by the student body itself.

According to the 2014 Harvard University Health Services Health Assessment—a comprehensive survey with more than 2,000 student respondents administered last spring—64 percent of respondents rated their overall physical health as “very good or “excellent” and 70 percent indicated that a physical health issue has never or almost never had a negative impact on their academic performance.

However, Director of Harvard University Health Services Paul J. Barreira said that students’ perceptions may not accurately reflect their physical wellness. This may be indicated by lifestyle habits such as sleeping, eating, or exercise—all of which can positively or negatively affect the health status of the students, Barreira said.

The survey results showed that 10 percent of respondents reported getting less than six hours of sleep on a school night, while two-thirds indicated they sleep for six to seven hours. Although Harvard students may be getting more sleep than the popular campus image of “Lamonsters”—students who toil away all night in Harvard’s only 24-hour library—suggests, they may still be regularly sleeping less than scientists suggest is optimal.

“Sleep deprivation” for the college age group has been defined by the Centers for Disease Control and Prevention as getting less than seven hours of sleep. By this standard, more than 70 percent of respondents would be categorized as “sleep-deprived”—a condition that can lead to feelings of anxiety and depression, scientists have found.

“I know students say ‘I’m healthy,’ but they are also getting only seven or less hours of sleep,” Bareirra said. “If [UHS] were going to name one general health concern, we would say sleep deprivation.”

The survey also reveals that students may not be balancing other aspects of their physical health at Harvard, such as exercise. Only 30 percent of  respondents met the national guidelines for recommended weekly physical exertion, though Barreira said the data suggested that Harvard students’ level of physical activity is not dramatically different from that of the college age group nationally.

Barreira added that students who structure their lives so as to maintain healthy habits generally report less stress or are better able to cope with their stress—another dimension of student life with implications for physical wellness that administrators said they are monitoring.

“Oftentimes there are threads between [mental health and physical health],” said Dean of Freshman Thomas A. Dingman ’67, whose office conducted an assessment of student stress last year.

According to a study conducted by the Freshman Dean’s Office, 86 percent of last year’s freshman reported significant stress from academic challenges. Sixty-seven percent reported challenges related to time management, and an increasing number said they experienced stress from extracurricular activities. Other reported causes of stress included searching for summer opportunities and social relationships.

The FDO’s results are in line with the findings of the Workgroup on Student Stress, which concluded in its 2013 report that student stress had four primary causes: time pressure, academic and extracurricular competition, identity and belonging, and managing digital media.

Dingman noted that extracurricular activities, instead of relieving student stress, have increasingly contributed to higher stress levels in recent years.

With stress permeating an increasing number of aspects of student life, sleeping and exercising habits that are less than optimal leave students poorly equipped to cope with stress and maintain their physical health, administrators say.

HARVARD HAS YOUR BACK

Acknowledging the link between stress and physical wellness, Harvard administrators and staff point to a number of existing and developing initiatives meant for students seeking to alleviate their stress.

Barreira cited the Workgroup on Student Stress as a product of growing awareness of a connection between stress, mental health, and physical wellness. The group made several recommendations, one of which was recently realized with the opening of the Serenity Room for freshmen in the basement of Grays Hall.

Although there have been some discussions among administrators of re-instituting a physical activity requirement for students, Dingman said, he believes the College should work to encourage rather than mandate students to get exercise.

Perhaps the most prominent example of an institutional resource that encourages students to prioritize physical wellness is the Center of Wellness at UHS, where students can get discounted hour-long massage or acupuncture appointments with a professional therapist. The Center also offers yoga classes and free meditation sessions. According to Director of Center for Wellness Jeanne Mahon, undergraduate students had more than 1,300 massage and acupuncture appointments during the 2013-2014 academic year.

The College also provides the freshman class and each upperclassman house with wellness tutors or proctors, who plan events to promote healthy living for their community. According to Kirkland wellness tutors Kelly P. Brock and Rory B. Lindsay, while the Center of Wellness coordinates trainings and assists tutors in scheduling some events, services vary from house to house because tutors are autonomous, planning everything from a puppy study break to Buddhist meditation based on resources and personal interests.

“[House administrators] are thinking about how to create calm spaces—how do you help students manage stress more effectively, as well as helping them change their habits?” Barreira said.

TOO STRESSED TO DE-STRESS?

While the 12 students interviewed for this article said they were aware of the resources that Harvard provides, most had not taken advantage of them—a state of affairs student wellness activists said indicates a need for broader cultural changes on campus regarding stress.

One student said that she is too busy to de-stress, questioning whether the College’s wellness programs would be an effective use of time for Harvard students caught in “a culture of continuous competition.”

“I do know about [the resources]. I’ve never actually taken advantage of them,” said Leila Y. Islam ’15. “[Getting a massage] takes up a lot of time. I’d rather take that time to do my work.”

Islam’s statement is representative of a broader lack of motivation for students to utilize these resources. Some said they heard about wellness resources in general terms from Harvard’s advertisements, but none of their close friends have made use of these resources, making them hesitant to seek them out.

“I’ve been informed [of the stress resources], but not well enough that I’d feel comfortable using them,” said Natasha H. Sarna ’18. “In the practical sense, I can’t see myself ever using it.”

According to student activists, that reluctance to seek out University initiatives places greater responsibility on student groups, who can not only offer resources to students in a friendlier manner, but can also help shift the culture on campus so that students will prioritize their own health.

Mimi Yen ’16 is the organizer of Stressbusters, a group of around 15 students who give free backrubs to fellow students. According to Yen, all Stressbusters have gone through a training process at the Center for Wellness, and their mission is to create “deliberate moments of calm.”

“There’s a culture here that says: if you’re not working, you are not being productive and therefore you are wasting your time here,” Yen said. “We should promote a culture that says: it’s okay to take a break. That’s something Stressbusters strives to do.”

Administrators also acknowledge the need for a cultural shift, a transformation that they say students can help to catalyze, while staff and faculty continue to act in support.

“I believe it is possible for Harvard students to maintain a high level of physical wellness, said Ryan M. Travia, director of health promotion and prevention services at UHS. “It requires some effort and for some, an altering of the mindset to prioritize things like sleep, exercise, and a healthy diet in order to ensure optimal health and peak performance both in and out the classroom.”

“I think our role as advisors is to keep asking questions of the care people take of themselves,” Dingman said, noting that administrators should support students’ efforts to adopt healthier habits, rather than imposing changes from above.

Though his symptoms have not disappeared, Kusunoki, who as a freshman had experienced a great deal of physical repercussions for his work and sleep schedule, said he has been slowly making adjustments in his sophomore year. He now visits spas, sleeps the full night, regularly frequents the gym, and takes breaks from campus.

“I feel so much better when I wake up,” he said. “I’m putting my own well-being over my academics.”