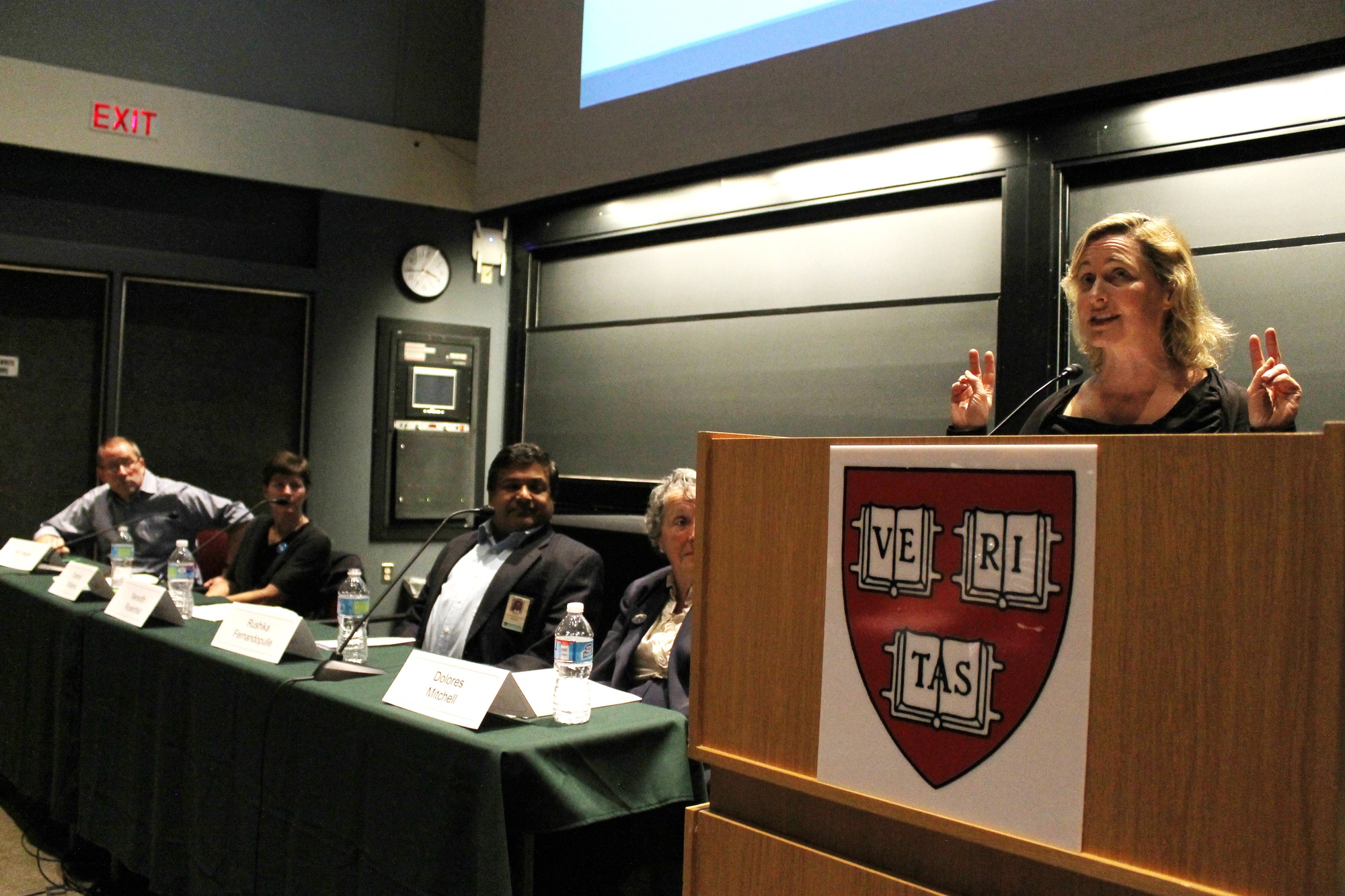 Meredith B. Rosenthal, professor at the School of Public Health, speaks about reducing health care costs at the HUCTW sponsored panel in the Science Center on Monday afternoon.
By Mariel A. Klein, Crimson Staff Writer

Around 150 members of the Harvard Union of Clerical and Technical Workers and Harvard faculty gathered in the Science Center on Monday afternoon to discuss strategies for improving employee health while keeping health care affordable.

The panel, sponsored by HUCTW, comes just weeks after Harvard faculty members unanimously passed a motion to ask the University administration to reverse recent changes to employee health benefits. Since, President Drew G. Faust committed to keeping the new benefits package amid faculty opposition. Although the plan only affects nonunion employees, many HUCTW members have been vocal in the healthcare debate and have expressed concern about the new plan. 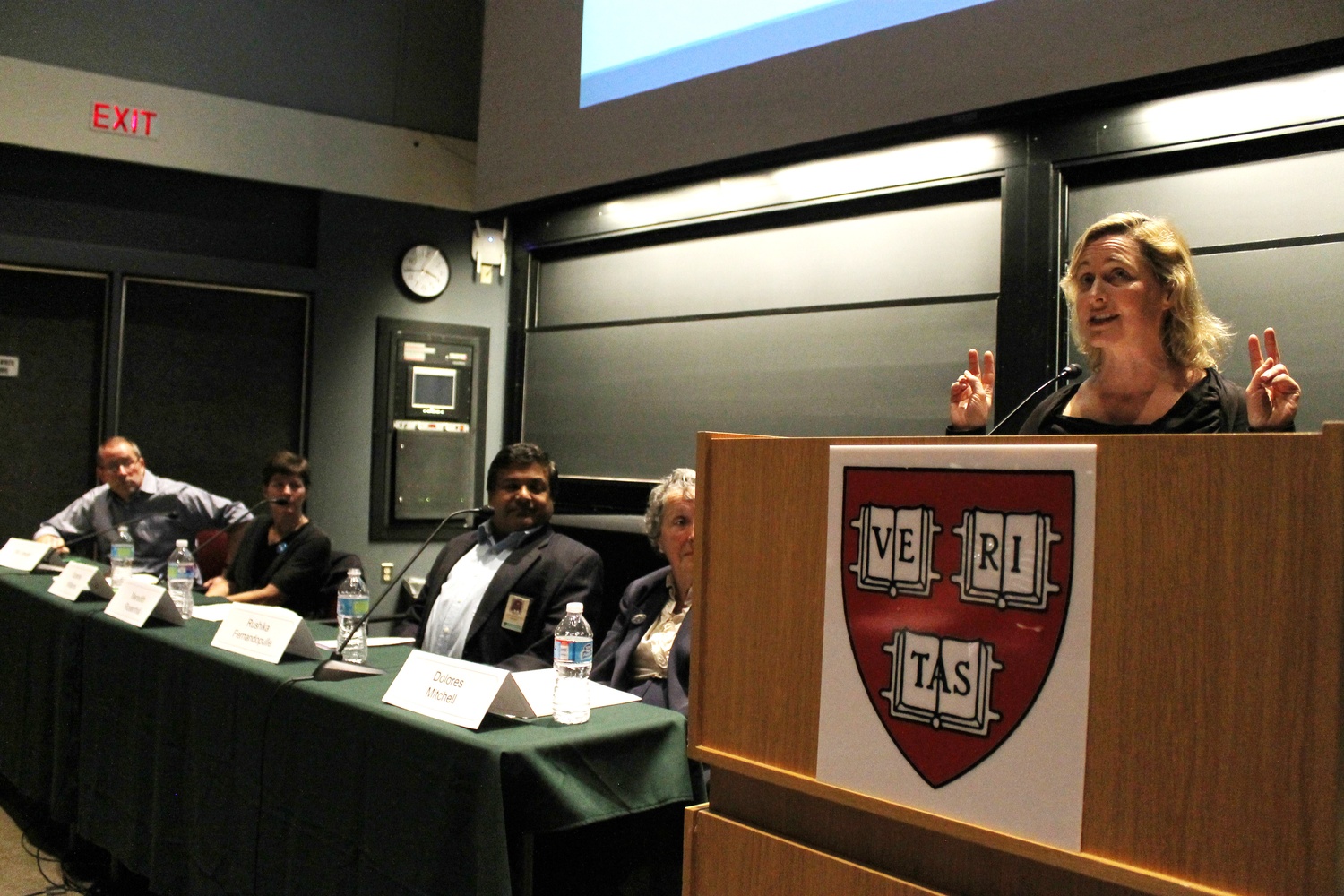 Meredith B. Rosenthal, professor at the School of Public Health, speaks about reducing health care costs at the HUCTW sponsored panel in the Science Center on Monday afternoon. By Jennifer Y Yao

Still, organizers said the panel was not aimed to address these controversial changes.

“We weren’t aiming to make huge political points with this,” said HUCTW Director Bill Jaeger. “We really did plan it and intend it as an opportunity for people to learn together and try to advance some ideas as a community.”

The panelists presented different ideas for reducing healthcare costs, although all three warned against deductibles, one of the new controversial additions in the University’s new health benefits plan for nonunion employees.

“I am personally opposed to join[ing] the race to the bottom, otherwise known as adopting high deductible plans, encouraging people to be underinsured, in my opinion, or shifting more cost to employees,” said Executive Director of the Massachusetts Group Insurance Commission Dolores L. Mitchell, one of the panelists.

Harvard Medical School clinical instructor and panelist Rushika Fernandopulle argued that health plans should focus on enhancing primary care to reduce costs, saying that only 4 percent of U.S. healthcare dollars are spent on primary care, while the other 96 percent are spent on visits to specialists, emergency rooms, and hospitals.

“Let’s take away barriers to primary care like copays,” Fernandopulle said. “Why are we putting a barrier for people to come to primary care? Stop that madness.”

The speakers explained that effective health care policy at Harvard in particular will require a combination of many of the ideas presented at the panel.

“There’s no solution out there that we’re all ignoring,” Harvard School of Public Health professor Meredith Rosenthal said. “It’s a whole lot of small changes that are locally appropriate and appropriate to our values in health benefits and everything else.”

Though the panel discussion did not explicitly address the recent health benefits changes, several attendees said the issue weighed heavily on their minds. Kennedy School employee and HUCTW member Missouri Ammons expressed concern about the plan’s potential implications for employees.

“I can appreciate that healthcare is very expensive,” Ammons said after the panel. “I do think that it doesn’t create any long-term benefit to put more costs on employees for various reasons, especially when Harvard is the employer. I know we have to watch our budget, but we are not strapped.”