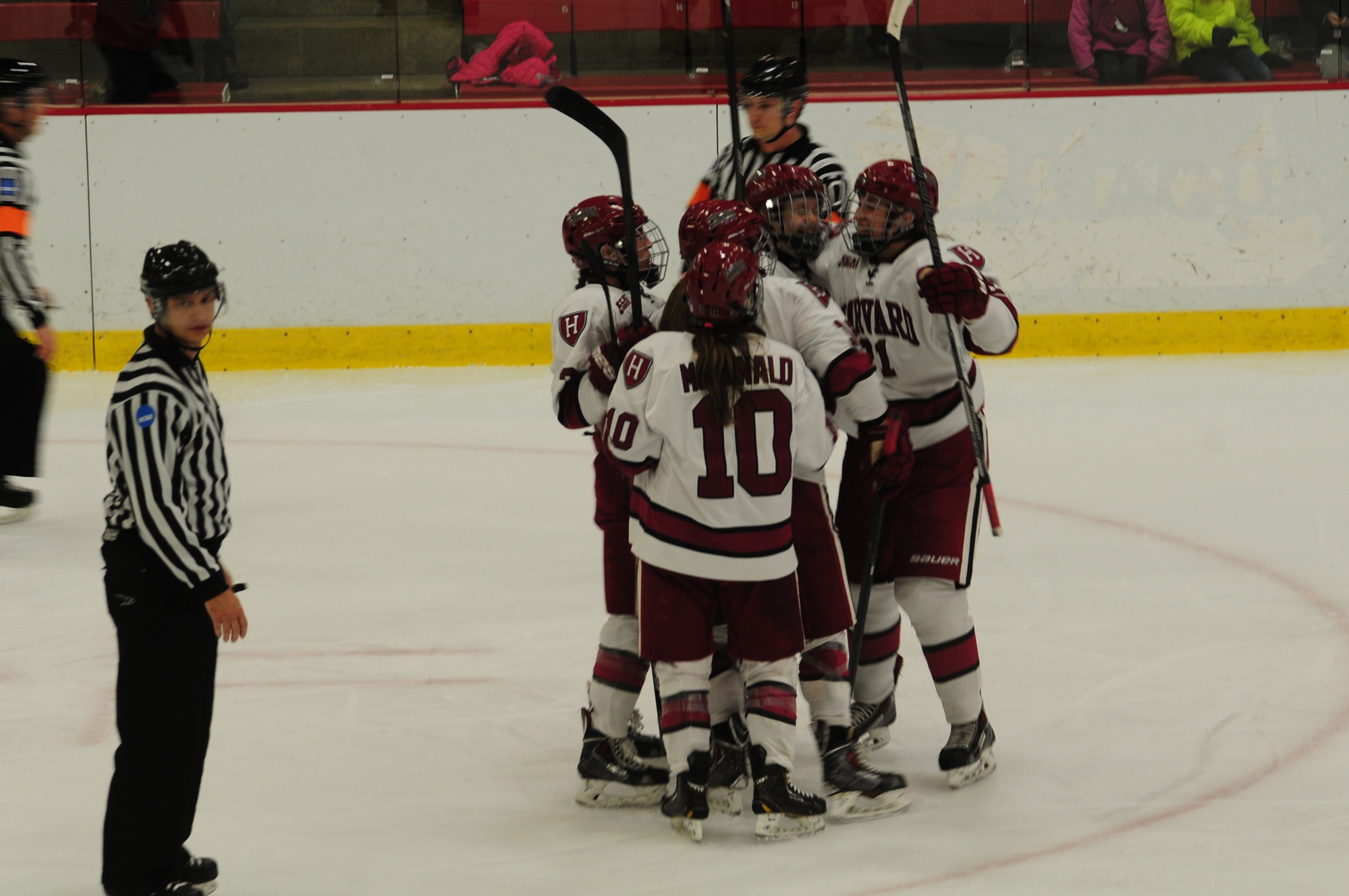 The Harvard women’s hockey team opened up its season at home with two wins in the newly renovated Bright-Landry Hockey Center. Scoring nine goals over the course of the two games, the team has given itself a base to build upon for the rest of the season.

The rhythm of the game quickly changed in the second period, as Harvard came out of the locker room with a renewed energy, scoring twice with a two minute period. The first goal came from the stick of junior forward Miye D’Oench off an assist from senior defensemen Marissa Gedman and freshman forward Karly Heffernan that ricocheted off of Union goalie Shanae Lundberg’s skate and found the back of the goal. A minute and 11 seconds later another Heffernan assist helped D’Oench’s shot once again find the net, this time in the upper left-hand corner.

“I think the first period was definitely a wakeup call for us that you can’t take any team lightly,” D’Oench said. “That being said we went into the second period knowing that we needed to just play our game, and we didn’t need to make any huge adjustments but keep playing Harvard hockey.”

Heffernan ultimately went to go on and tally a goal of her own, capping off Harvard’s scoring effort at the end of the game. The first two games of the year have each had a scoring drive delivered by a freshman, making the class of 2018’s voice heard early in the season.

“It’s great,” D’Oench said. “They’re playing with a ton of confidence, they’re moving the puck well and they have their heads up. It really fires up the upperclassmen too. You want to feed off of that momentum whether you’re a freshman and it’s your first game, or you’re a senior and you’ve done this for four years.”

Sophomore goalie Molly Tissenbaum recorded her first career win in the victory, stopping seven of the Dutchwomen’s nine shots that were taken against her and notching the complete game in game.

The season opener against the Engineers (1-5-3, 0-1-1) was not only the first game for the team, but the first game Harvard coach Katey Stone has been on the sidelines for the Crimson since the 2012-2013 season. Stone spent last year preparing Team USA for their February competition in the Sochi Winter Olympics.

“We’re working hard to be the best we can,” Stone said. “We’ve got a long way to go and a lot to learn and we’ve got a lot to do but I love it. I love this place and I love this program so I’m happy to be back.”

D’Oench again was a large offensive contributor in the victory, scoring the opening and the closing goals of the game for Harvard. D’Oench has now tallied a point in 10 consecutive games, dating back to the 2013-2014 season.

Freshman forward Lexie Laing scored her first career goal off of the Crimson power play in the second period while junior forward Mary Parker also found the back of the net.

While veteran junior goalie Emerance Maschmeyer was out of town playing for Team Canada in the Four Nations Cup, sophomore Brianna Laing took over in goal, making 12 saves on the night while allowing only one shot to find its way past her. Laing rounds out the collections of options Stone has to play between the posts, making the team a versatile powerhouse against any opposing offense.

“I think [having three goalies] speaks to the depth of this team and that we have a lot of faith in everyone that puts on the jersey,” D’Oench said. “It was awesome to see in the past three games we’ve seen all three goalies play and that speaks to how deep we are and the potential we have.”

Winning the opening two games of the season shows the potential for the team to have a successful season, but with the majority of its games still ahead, improvements are still on the forefront of the team’s agenda.

“We have to work on a lot,” Stone said. “One of the things I think we need to work on the most is that we need to talk to each other. We didn’t talk as much during the games as we do in practice. The good news is we have two weeks to get it done and get our game rolling.”