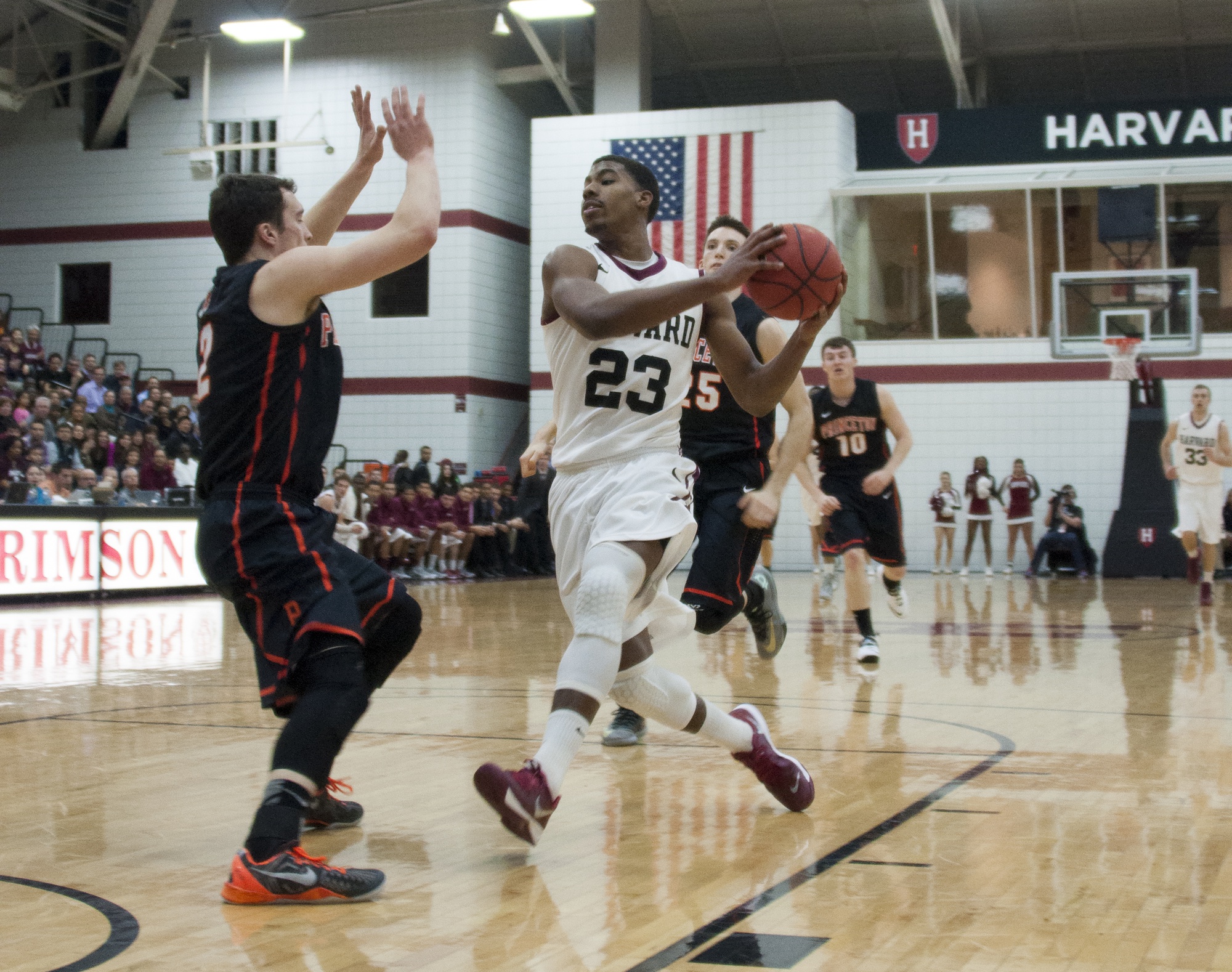 Senior wing Wesley Saunders finished with 27 points, including a late three-point play, to propel Harvard to a 75-73 victory over UMass.
By David Steinbach, Crimson Staff Writer

It was a game that had to come down to its waning moments.

The Harvard (4-1) and UMass men’s basketball teams (5-1) battled neck-and-neck for 39 minutes Saturday afternoon. For the final 17 minutes of play, neither team built a lead that exceeded three points.

Fittingly, the final minute would prove decisive. And who else would be the one to step up but senior wing Wesley Saunders.

With under a minute remaining and the teams knotted at 71, the Crimson’s offensive possession appeared doomed. As passes around the perimeter amounted to nothing, junior co-captain Siyani Chambers dumped the ball off to Saunders.

“I knew a play needed to be made,” Saunders said. “I just tried to get to the basket any way I could.”

He did just that. Saunders cut his way to the hoop, absorbed contact, and finished a floating layup as the referee blew his whistle with the foul call. As the Harvard contingent roared, Saunders pumped his fist. The senior converted the free throw, and Harvard took a 74-71 lead with 38 seconds remaining.

UMass, however, would not go away. After a layup from guard Derrick Gordon and a missed Harvard free throw, Gordon once again made his way to the baseline with his squad down one. As Gordon elevated for the close-range shot, Crimson seniors Kenyatta Smith and Steve Moundou-Missi went up with him. The attempt, which would have given the Minutemen the lead, clanked off the iron.

“You don’t want to foul down the stretch, especially with us having 10 fouls,” Smith said. “So we just wanted to contest and get a hand up there.”

Even then, the drama had not yet concluded. Down two points with as many seconds remaining, UMass center Cady Lalanne chucked a baseball pass down the court from under his own basket. The rock ended up in the hands of Trey Davis, who launched an uncontested shot from just beyond the three-point line.

As the ball hung in the air, UMass and Crimson fans alike fell silent. When it rimmed out, the Crimson faithful could finally breathe once more as its team escaped with a hard-fought 75-73 victory.

A BALANCED VS. SINGLE-HANDED ATTACK

Harvard and UMass may have recorded baskets at equal rates throughout the game, but there existed few similarities in the sources of offensive production for the two squads.

Touting a balanced attack, UMass obtained points from throughout its lineup all game long, with five different players scoring in double-figures. Davis and Lalanne led the team with 13 points apiece, but its fifth-highest scorer was only three points back when the final buzzer sounded.

“When you have a balanced attack, it’s very difficult [to defend] when you can get production from a lot of different areas,” Harvard coach Tommy Amaker said. “That’s why [UMass is] going to be one of the better teams we play all year.”

By contrast, as it has for much of the year, Harvard relied overwhelmingly on one man—Saunders. The senior showcased his usual fadeaway jumpers, layups in traffic, and exemplary body control to score a season-high 27 points. Smith was the only other Crimson player to reach double-figures with 11 points.

Saunders took over the game in the second half and provided buckets at crucial moments. In addition to his decisive three-point play with under a minute to go, Saunders nailed a clutch trey and netted two late free throws to put the Crimson ahead.

Sophomore Zena Edosomwan and Smith provided jolts of energy for Harvard on the offensive end but it was the play of Saunders from start to finish that—once again—propelled Harvard to victory.

A ROAD GAME AT HOME

Lavietes Pavilion was rocking Saturday afternoon. But it was the fans clad in Minutemen red—not crimson—who were making all the noise.

Chants of “U, MASS” echoed throughout the building all game long. On three separate occasions, UMass forward Maxie Esho threw down resounding one-handed dunks that brought the roaring, partisan crowd to its feet.

“They had a great turnout and a great crowd,” Amaker said. “That’s what makes the game even that much more rewarding and meaningful and special for us to be able to pull it out.”

Indeed, the home contest felt like a road game for Harvard, perhaps contributing to the team’s first half struggles. After taking an early 5-2 lead, the Crimson did not regain the upper hand until less than 12 minutes remained in the second period.

Matters were made more difficult with Moundou-Missi in foul trouble. After picking up two quick fouls, the co-captain was called for his fourth personal early in the second half, forcing him to the bench for 13 consecutive minutes.

Moundou-Missi’s teammates, however, managed to persevere in the hostile environment. Despite only finishing with five points, Chambers notched nine assists. The team also demonstrated its improvement in breaking the press since its 24-turnover loss to Holy Cross, only coughing up the rock eight times to an aggressive UMass defense.