Rowling’s 2008 Commencement Address To Be Published as Illustrated Book 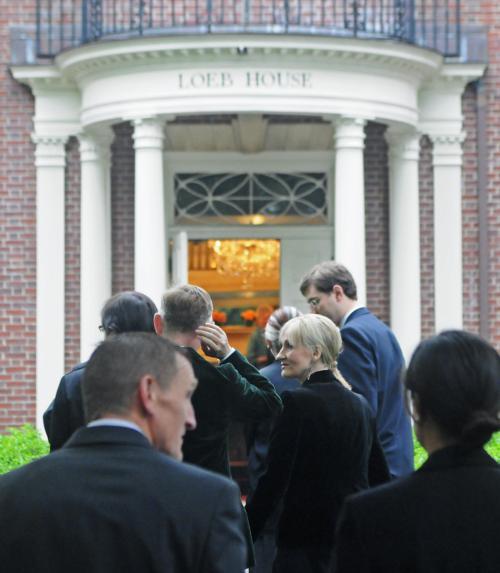 Six years after J.K. Rowling delivered the Harvard Commencement address that University President Drew G. Faust called the most “moving and memorable” she had ever seen, Rowling’s motivational words will be immortalized in an illustrated book, according to a statement released on Tuesday by publisher Little, Brown and Company.

'Harry Potter' author J.K. Rowling enters a reception at Loeb House in June 2008 evening before the annual dinner for honorary degree candidates. By David I. Fulton-Howard

The book, titled "Very Good Lives: The Fringe Benefits of Failure and the Importance of Imagination," is set for a worldwide release on April 14, 2015.

In the speech, Rowling spoke of the ethos of failure by using her own rags-to-riches stories as an example.

“The knowledge that you have emerged wiser and stronger from setbacks means that you are, ever after, secure in your ability to survive,” Rowling said in the address. “You will never truly know yourself, or the strength of your relationships, until both have been tested by adversity. Such knowledge is a true gift, for all that it is painfully won, and it has been worth more than any qualification I ever earned.”

The move may come as little surprise to many in the Harvard community, who remember the address—in which Rowling spoke of the ethos of failure—as one of the most powerful ever delivered at Commencement Exercises. In a community that has, at times, been characterized as risk-averse, Rowling’s words still prove inspirational.

"I have heard and read many commencement speeches, none more moving and memorable than J.K. Rowling's," Faust said in a press release. "Years after her visit to Harvard, people still talk about it and still find inspiration in her singular evocation of the idea that living a meaningful life so often means daring to risk failure."

Little, Brown and Company’s announcement is bound to please the many fans of Harry Potter—the bestselling series of fantasy novels born out of Rowling’s own failures—on campus.

“It’s not surprising that [Rowling’s] words are still so important today,” said self-identified “avid Harry Potter fan” Alex M. Fisher '18.  “It’s great news she will be credited for it like this.”

Rowling and the publisher also announced that a portion of the proceeds from sales of “Very Good Lives” will be allocated to University-wide financial aid funding at Harvard and to Lumos, an organization founded by Rowling that helps disadvantaged children.

Representatives from Little, Brown and Company did not immediately respond to requests for comment.