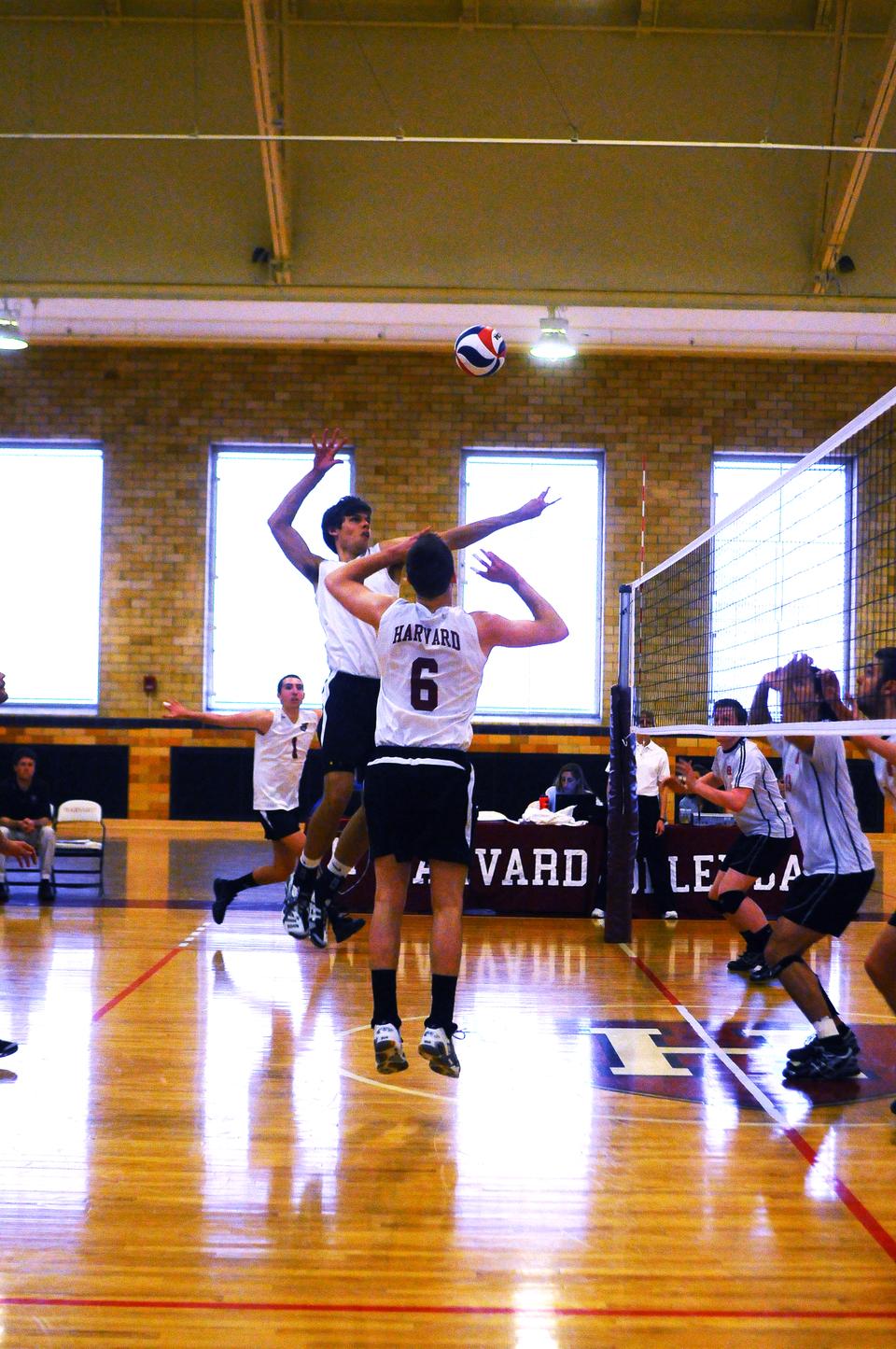 The men's volleyball team, shown here in earlier action, suffered a 3-0 defeat at the hands of Penn State to fall to second in the EIVA.
By Julio Fierro, Contributing Writer

In what was a crucial weekend for Harvard men’s volleyball (5-4, 4-1 EIVA), the team looked to pick up big victories at St. Francis and Penn State and maintain its unbeaten start in the EIVA. But after starting the road trip with a 3-1 win versus St. Francis (8-5, 3-2), the Crimson men faltered, losing in straight sets to Penn State (12-2, 5-0) to break their four-game win streak.

The Nittany Lions remain atop the EIVA, with Harvard and St Francis right behind them in a hotly-contested conference.

In a battle between the two remaining undefeated teams of the league for first place, the No. 12 Nittany Lions came out on top in a 25-19, 25-15, and 25-22 straight-set victory. The Crimson offense was smothered, managing only a .065 hitting percentage throughout the game and a -.029 hitting percentage in the second set.

“Penn State is a really big team that was able to block us well,” said sophomore outside hitter Branden Clemens. “It was tough to get the kills we usually get. We always want to beat Penn State because they are always ranked number one in the conference.”

Penn State grabbed a lead early in the first set thanks to a 9-5 run that turned a close 7-7 game to the Nittany Lions’ favor, gaining an advantage it would never relinquish. The second set followed a similar trend, as the home team took the lead from the first point and held it for the entire set.

The third set was more competitive, with the Crimson keeping the set close down the stretch—the Nittany Lions were never able to distance themselves by more than three points. However, a game-leading 11th kill by Penn State outside hitter Nick Goodell would end the game and claim victory for the home favorites.

Despite the loss, the team was able to use this game as a learning experience as well as a way to measure where it is at performance wise.

“It was a different type of volleyball,” co-captain Nick Madden said. “It’s more of a pass and set kind of game as opposed to a scrappy type of volleyball when you play against teams like these. It was a good learning experience.”

Leading 6-4 in the second set, a kill by senior middle blocker Kyle Rehkemper sparked a 6-0 run by Harvard to go up 12-4, a lead that proved to be insurmountable for the home team. Harvard carried this form through the third set, before briefly falling behind at the start of the final set. But a service error by St. Francis would spark a rally by the Crimson men, which ultimately resulted in victory.

Madden, junior outside hitter DJ White and freshman outside hitter Casey White recorded double-digit kills with 14, 17 and 10 respectively to lead a balanced Harvard offense to a total of 51 kills. Madden also recorded 13 digs to complete his fifth career double-double.

Complementing its offensive performance, the Crimson squad put up a tough defense as well. St. Francis committed 26 attack errors compared to only 12 by Harvard, in addition to being held to a.189 kill percentage. The Red Flash was also limited to a .182 hitting percentage compared to .312 by the Crimson.

“The second set we got on top and blocked well,” Madden said. “The whole team in general really picked it up on defense after the first set.”

While not the smoothest of victories for Harvard, the team used this game as an opportunity to learn more about its style of play.

“That first game came out flat,” Clemens said. “We didn’t go out with energy and we were not entirely there mentally. We learned that we always need to play as hard as we can no matter who the opponent is.”