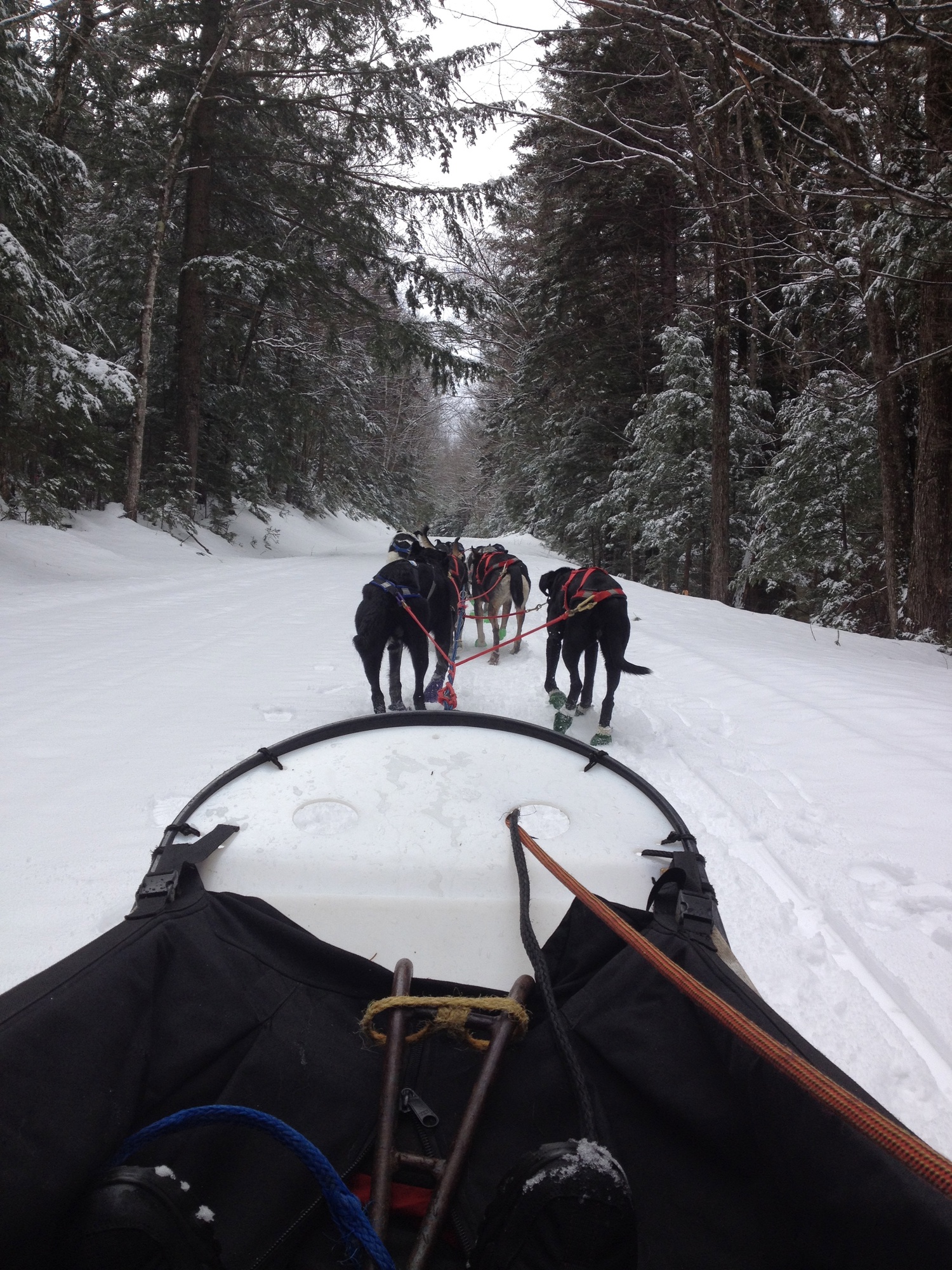 If someone had told twelve-year old me that I would someday voluntarily join a dog sledding trip in January in Maine, I would have put down my cold medicine next to my three inhalers and wheeze-laughed until I cried. If someone had told fifteen-year-old me that I would someday voluntarily wake at 6:30 a.m. to shovel dog shit, I would have rolled over in bed and asked for ten more minutes.
By Anne A. Power

If someone had told twelve-year old me that I would someday voluntarily join a dog sledding trip in January in Maine, I would have put down my cold medicine next to my three inhalers and wheeze-laughed until I cried. If someone had told fifteen-year-old me that I would someday voluntarily wake at 6:30 a.m. to shovel dog shit, I would have rolled over in bed and asked for ten more minutes.

However, if someone had told six-year-old me—someone who couldn’t have a dog because of apartment space and an allergic mother—that I would some day spend quality time with fifty-plus husky mixes, I probably would have fainted from joy.

I like to think it was the six-year-old in me that prompted me to sign up for the first annual dog sledding Wintersession adventure put on by Pforzheimer House. Despite the fact that I had never once in my life been camping, I put my name down for the trip, which was based out of a lodge in western Maine.

As I packed, I pictured myself in my chic après-dog-sledding attire, sitting in front of a fire, delicately worn out after a day of light exertion with the dogs. The reality, of course, had a lot more swearing, feces, dog hair, and hauling around animals 50,000 times stronger than me. And it was so much better than I could have imagined.

Accompanying me on the trip were seven other Pfoho residents, along with the two masters and their energetic nine-year-old son. When we arrived at the lodge, which was run by a couple with decades of animal training between them, we were sent to help stuff the dog’s crates with fresh hay. We did this in the growing darkness, crouching and stuffing, often falling violently on the icy terrain. Then it was back to the lodge for a huge dinner and as many word games we could think of to fill the absence of TV and internet.

We woke up at 6:30 the next day to do our chores in the dog yard. This involved shoveling dog excrement into a bright orange sled pulled by one of our less lucky compatriots. In the process, we realized that the ground in the dog yard, where we had spent so much time prostrate the night before, was often more yellow and brown than white.

Once the poop was shoveled, we were sent to fetch the dogs one by one in order to put them in the truck that would take us to the trail. This involved unclipping them from their chains, and then, hauling them up on their back legs and hopping them over to the truck. One enthusiastic dog managed to take me down to the feces-covered snow but I, like a true American Dog Man, never let go and got right back up again.

We then headed off to a local state park, where we did more hauling and hopping as we organized the dogs and hitched them up to the sled. The yowling and howling of the excited dogs almost covered my own shouting as I realized I had been peed on by one dog and jumped on by one who had just stepped in said pee.

After getting briefed in sled etiquette (which boiled down to never letting go of the sled), we were ready to go, with the four sleds lined up and the dogs straining and jumping in excitement. Our first time out, the arrangement of bodies in the sled put the guide standing on the back while the two students were stuffed together into the basket of the sled. If you are ever looking for a way to get to know somebody better, I highly recommend sitting in their lap in a dog sled less than twenty-four hours after meeting them. Instant comrades.

It was, for lack of a better word, exhausting to guide the sleds. The dogs, though excited to run, unfortunately strayed too far towards every steep embankment they could find. Since it was our job to make sure the sled didn’t go too far to the left or right, we also managed to get in a great core workout. By the second day, however, I had become an old pro, issuing insightful statements like “ABC is running a little funny” or “XYZ seems to really want to hump his partner.”

For the two full days we were there, we ran the dogs in the mornings. In the afternoons, we went snow tubing on the first day (where we bullied the attendant into letting us go down ten at a time and nearly killed ourselves) and then cross-country skiing on the second (less dangerous but still super fun). On the third day, after a morning spent shoveling dog poop and doing some “exploring” (read: crashing around in the woods), we bid a fond farewell to the wonderful dogs and staff and journeyed back to Cambridge.

While my bruises are fading and the dog smell is finally coming out of my clothes, I know that I will forever value my brief glimpse into the grueling but rewarding lives of American dog men, using my memories to trump other people’s stories at parties and threaten my children with tales of the poop sled.