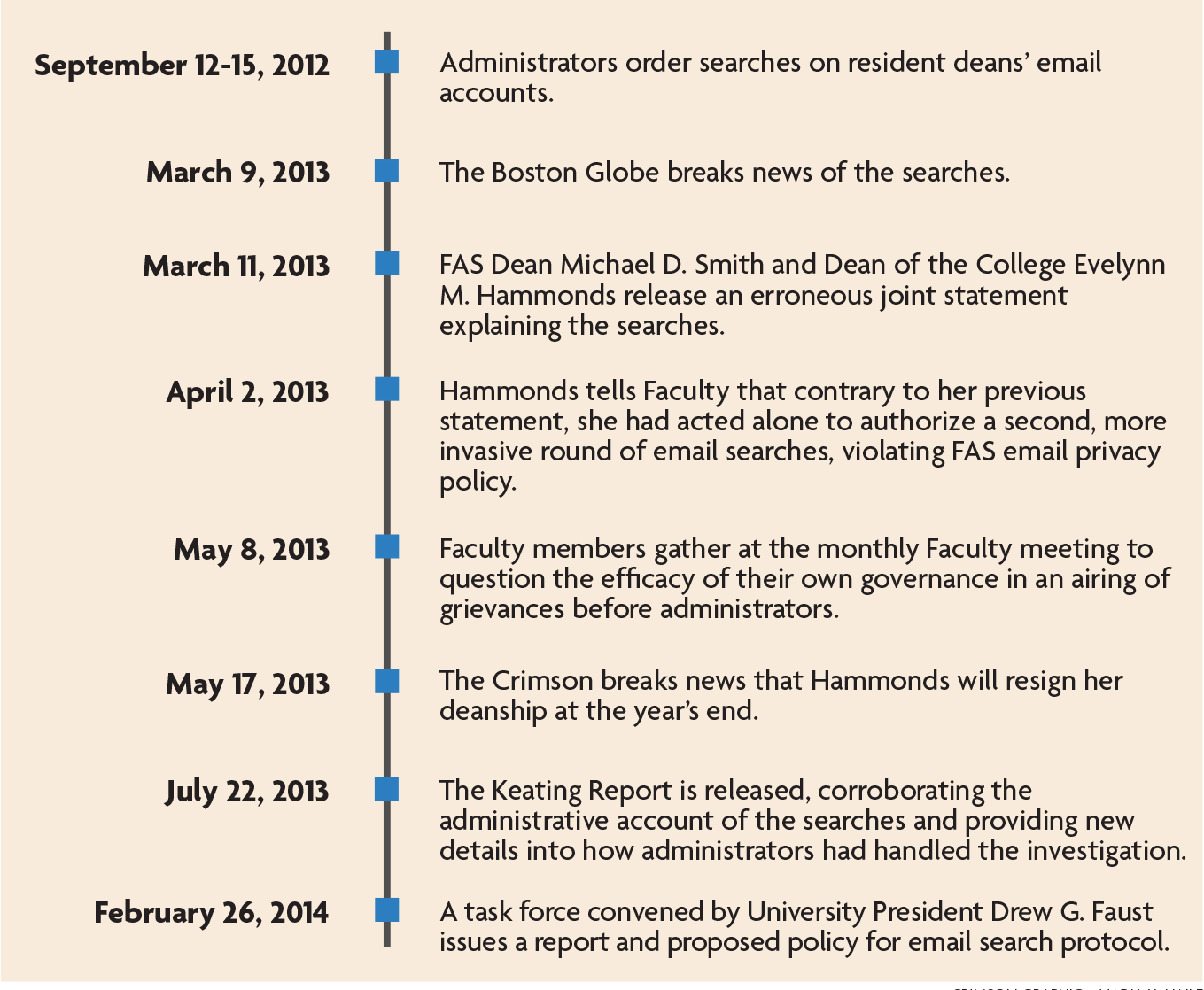 On March 9, 2013—one year ago Sunday—members of Harvard’s Faculty of Arts and Sciences learned for the first time that top administrators had secretly searched the email accounts of 17 resident deans in connection with the Government 1310 cheating scandal.

In the days and weeks following the announcement, faculty members loudly voiced concerns over faculty governance and consultation, as well as a loss of trust in administrators that they said had violated their privacy policy and reasonable expectations.

But one year later, professors say those concerns have faded within the minds of members of the University’s flagship faculty. Along with the passage of time, they point to some combination of three key actions—an external report on actions surrounding the searches, a draft of a new electronic communications policy, and the resignation of one of the deans responsible for the searches—as having mellowed faculty concern.

“As far I can tell…it’s not something that is particularly on the mind, at the moment, of faculty,” Mathematics professor Wilfried Schmid said. “This has somewhat faded. I think in other ways, too, there have been some attempts by the administration to soften things in various ways.”

Philosophy professor Edward J. Hall attributed the retreat of interest to the faculty’s tendency toward a “short attention span” as well as a growth in understanding of the events that transpired surrounding the email search.

Twenty faculty members, many of whom vocally voiced concerns last spring in letters, interviews, and Faculty meetings, declined or did not respond to repeated requests for comment for this story.

FAS Dean Michael D. Smith also declined to comment on the aftermath of the searches or the state of his relationship with the Faculty he oversees for this story. Smith has refused to meet for regularly scheduled interviews with The Crimson or discuss the searches and their aftermath since May 2013, the last time he discussed the searches with reporters.

Smith, along with then-Dean of the College Evelynn M. Hammonds, took responsibility for the initial searches, which were executed in Sept. 2012 in an effort to identify who had shared internal Administrative Board documents related to the Gov. 1310 case. On April 2, relations between administrators and faculty members deteriorated further when Hammonds told professors at their monthly meeting that she had acted without Smith’s approval to authorize a second, more invasive round of queries.

At their next meeting in May, the last of the year, faculty members spent nearly two hours lodging complaints with administrators over issues of governance, loss of trust, and communication.

Later that month, The Crimson reported that Hammonds would resign at the academic year’s end. In a statement after her resignation became official, Hammonds maintained that the email search scandal “was difficult but it was not a motivating factor in my decision to step down.”

In a report released in July, Boston attorney Michael B. Keating corroborated the administration’s claim that those involved had been unaware that they were breaching privacy protocol at the time the searches took place.

The 29-page Keating report helped to clear up uncertainty from which the the faculty’s initial frustration arose, Hall said. Such uncertainty lent itself to the vision of a “worst-case scenario,” he added. “[That] dissipated quickly once people realized what had actually transpired.”

In addition to commissioning Keating at the April faculty meeting, University President Drew G. Faust announced the creation of a committee tasked with reviewing the patchwork of email privacy policies in place  across the University at the time of the searches with the end goal of recommending a universal policy.

The committee handed down their proposal for a single, University-wide privacy policy late last month, after almost a year of consideration. If approved, it would establish a faculty oversight committee, regular record-keeping, and a clear chain of command for authorizing access to electronic communications.

Harry R. Lewis ’68, a computer science professor and the former dean of the College, wrote in an email that the “recommendations seem to get all the major points right—and if these policies are adopted, that will be a big and reassuring change in the standards.”

This March’s Faculty meeting, which would have been the first chance for faculty members to discuss the proposed policy in a formal setting with administrators, was cancelled last week due to “insufficient business ready for action.” The cancellation leaves unanswered the question as to where the faculty’s collective voice lies a year after the email searches were announced.

“Biding time is the general attitude,” History professor Charles S. Maier ’60, a former Crimson Editorial chair said, adding that faculty are not as “excited” about the issue at the present.

“We’ll see when this [email privacy] report gets debated,” he said.

Hall said that faculty members’ quiet reaction to the cancellation of last week’s meeting offers a sharp contrast with the climate last spring, when such a cancellation “would have been a bad move.”

An earlier version of this article incorrectly stated the number of resident deans whose email accounts were searched by administrators in connection with the Government 1310 cheating case. In fact, the accounts of 17 resident deans were subject to the secret queries.