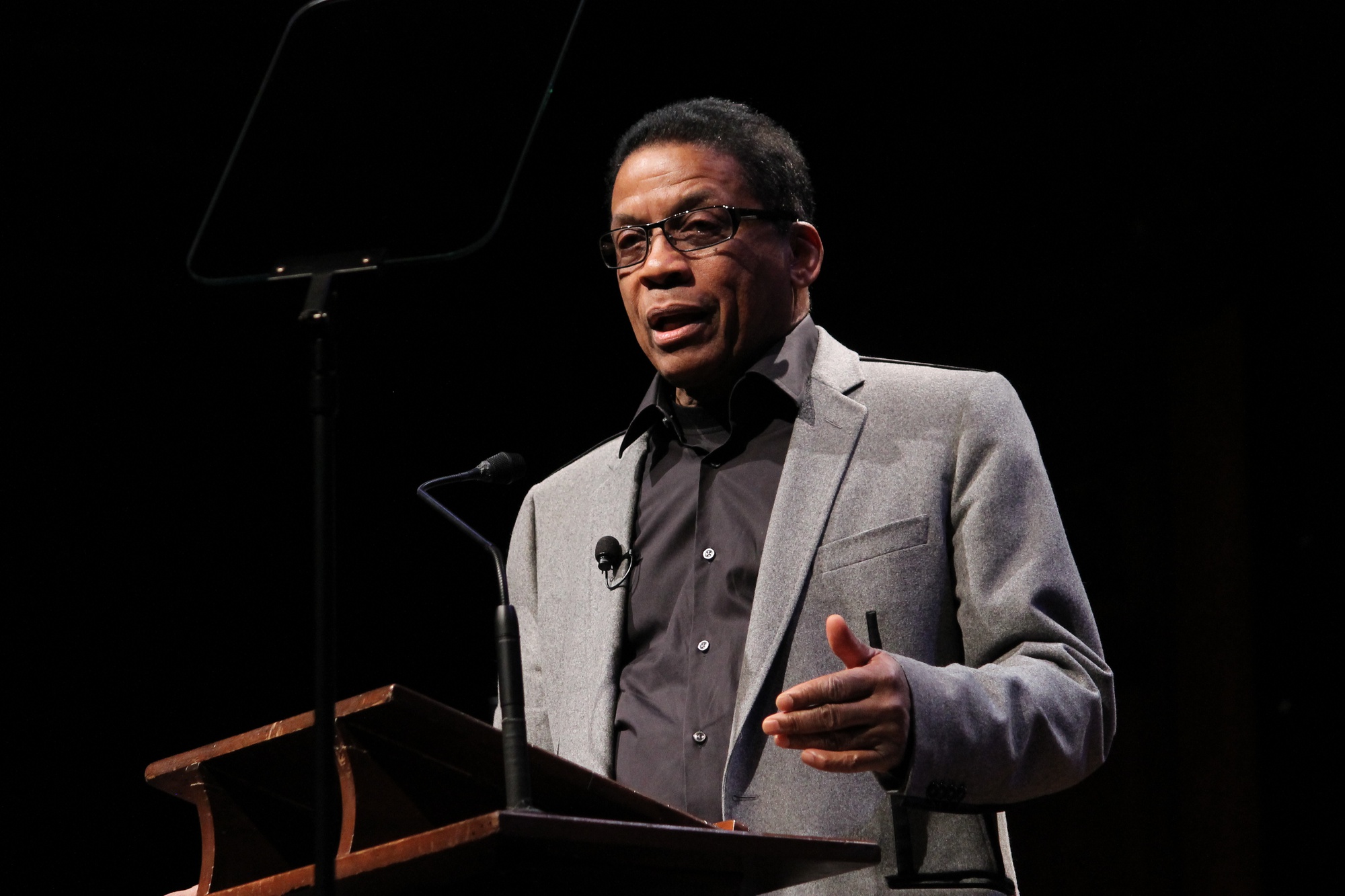 Herbie Hancock (shown in Set 4 of the Norton Lecture Series) discussed Buddhism and artistic creativity during his fifth lecture in "The Ethics of Jazz" series in Sanders Theatre on March 24. Hancock described his personal experiences with Buddhism and how it has enhanced his musical creativity.
By Joanie D. Timmins, Contributing Writer 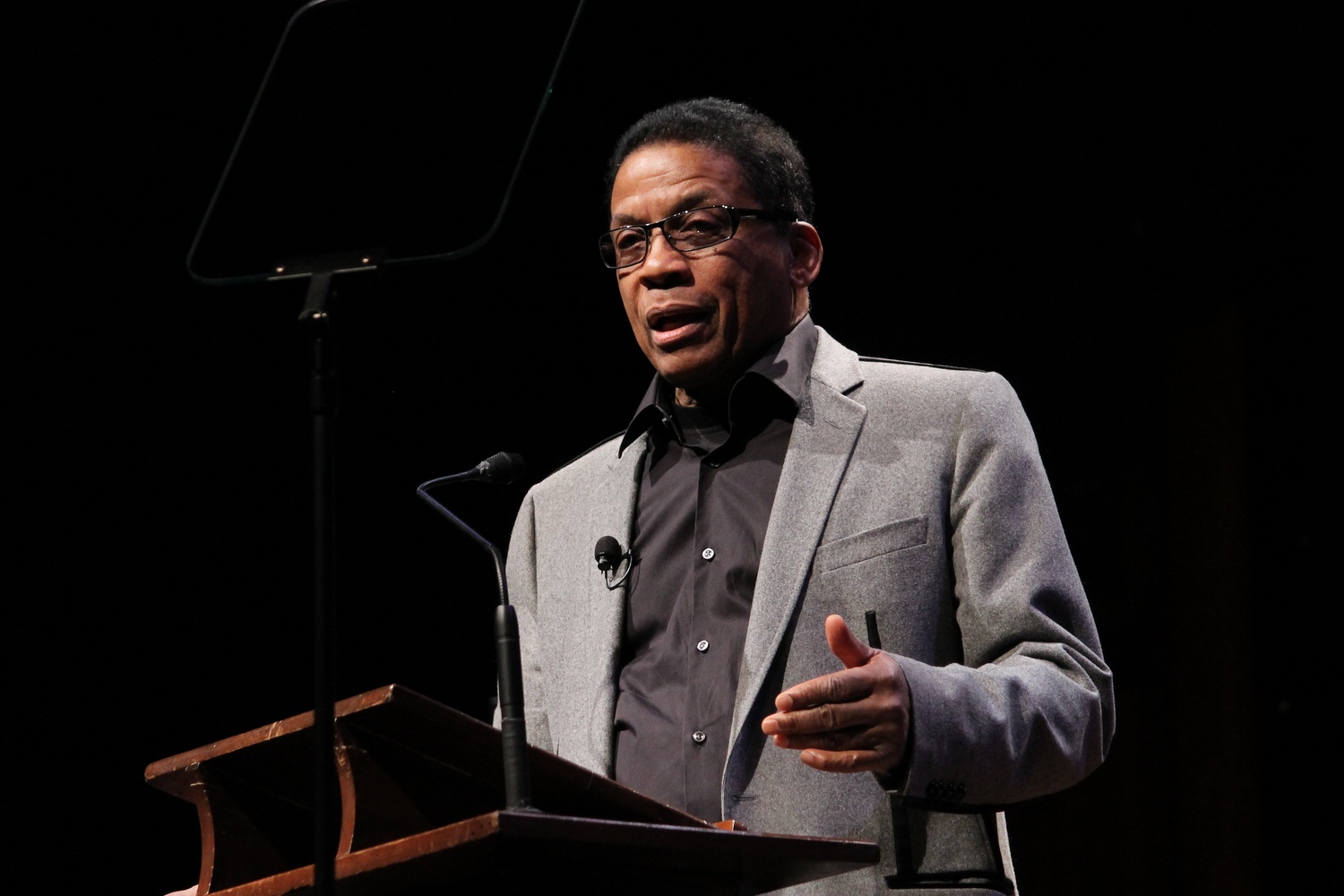 Herbie Hancock (shown in Set 4 of the Norton Lecture Series) discussed Buddhism and artistic creativity during his fifth lecture in "The Ethics of Jazz" series in Sanders Theatre on March 24. Hancock described his personal experiences with Buddhism and how it has enhanced his musical creativity. By Jennifer Y Yao

Herbert “Herbie” J. Hancock, the 2014 Charles Eliot Norton Professor of Poetry, discussed how his Buddhist beliefs have fueled his musical creativity in a lecture at Sanders Theatre Monday afternoon.

At the lecture, entitled “Buddhism and Creativity,” Hancock first shared his story of adopting Buddhism and then discussed the relationship between religious worldviews and artistic innovation. The lecture was the penultimate installment of the semester-long, six-part Norton lecture series entitled “The Ethics of Jazz” and presented by the Mahindra Humanities Center.

Hancock said that he was first introduced to Buddhism by Buster Williams, a member of his band, at a gig in Seattle in 1972. Since then, he has been practicing Buddhism, which he says “has affected how I look at everything.” He said he believes that practicing Buddhism has “profoundly transformed and enhanced [his] life, both as a human and as a musician.”

Hancock described the practice of Buddhist principles as a condition of being awakened, and said that the exercise of these beliefs “reveals a major shift in the relationship between yourself and your external environment.”

He added that this new way of life and the Buddhist chants that he has since embraced unleashed a great inspiration for his creativity.

Hancock outlined what he believes are the fundamental characteristics of cultural artistic creativity: inspiration, hard work, challenge, courage, originality and innovation, ability or skill, and imagination. Yet he said that the true definition of creativity transcends words, and for this reason, creativity is like magic.

Hancock then asked the question, “So, well, what motivates creativity?”  He continued to list the several main motivators, including fear, pain and suffering, joy, the time clock, stress, anger, desire, humor, and observation.

He argued that everyone has the capability to be a creative artistic individual, especially since everyone is involved in “the art of living.”

He specifically discussed the power of Buddhism to influence creativity, saying that the belief system “modifies our state of being, and expands our creativity.”

Hancock wrapped up the lecture by declaring that even amid difficult circumstances, “a person that lives with imagination, hard work, innovation, along with integrity, wisdom and compassion...can be a profound contributor toward the creation of a harmonious orchestra of life,” even though the “art of living is, beyond a shadow of a doubt, the most difficult to master.”

Audience members, many of whom had attended Hancock’s previous lectures, said that they enjoyed learning about what has inspired the jazz musician.

Cambridge resident and painter Eve Perkins said that she appreciates that Hancock’s teachings can be translated into other disciplines.

Bradford G. Rose ’14, a drummer and manager for Harvard Jazz Bands, said he attended the lecture because he believes it is “important to learn an artist’s source of inspiration–it adds some color.”