Baseball Hits the Road to Take On Princeton 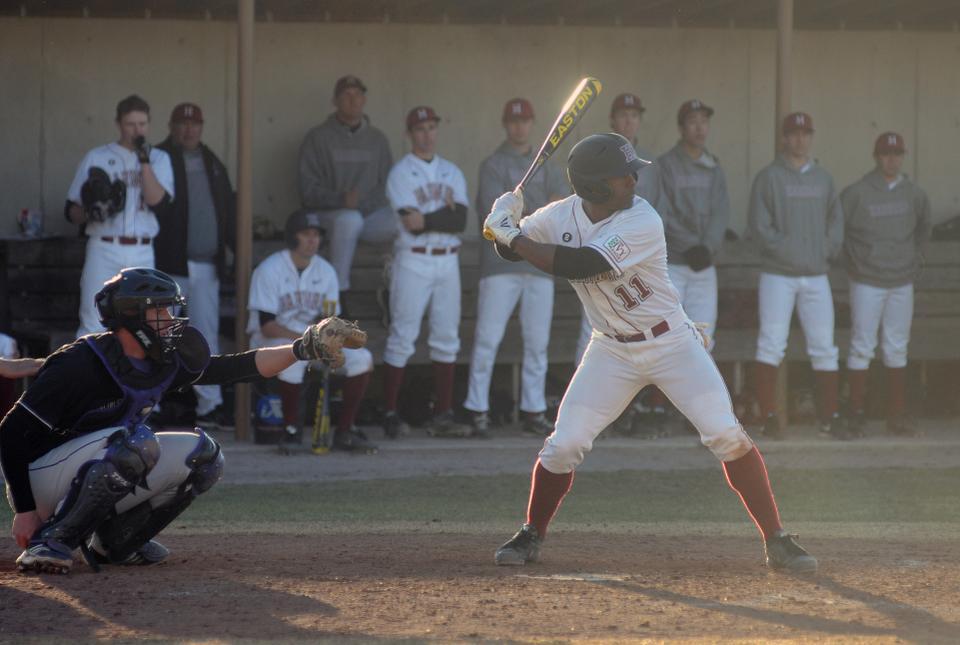 Senior utilityman Carlton Bailey, shown here in previous action, leads the Crimson with a .323 batting average so far this season. Harvard begins its Ivy League season this Saturday with a road doubleheader against Princeton.
By Adam Martin, Contributing Writer

It was almost one year ago that the Harvard and Princeton baseball teams met at O’Donnell Field in what shaped up to be a wild, unpredictable game that ended in a 20-19 victory for the Crimson.

In that track meet of a game, both teams took advantage of winds gusting up to 40 miles per hour to string together hits and pile up runs. And in the ninth inning, with Harvard down by two, three wild pitches allowed a trio of Crimson baserunners to cross the plate and clinch a bizarre win.

Now, a season later, these two teams prepare to face off again in a Saturday doubleheader at Princeton’s Clarke Field in which Harvard (4-13) and the Tigers (5-11) will both see their first Ivy League action of the year.

“Over the last 17 games, like everyone else across the nation, we’ve been trying to prepare for our conference schedule,” Crimson coach Bill Decker said. “Now it counts, and we need to try to play at that level.”

For Harvard, those past 17 contests have been comprised largely of very close games that haven’t gone the Crimson’s way. Seven of Harvard’s 13 losses this season have come by one run, and the Crimson dropped its last two contests by a combined total of only three runs.

“We’ve faced some really good competition,” Decker said. “[But] with the exception of one ballgame, we had a chance in each of them.”

The Tigers have also had their share of disappointment, although many of their defeats have been less contested. Of the team’s 11 losses, eight have been decided by six or more runs.

Such wide deficits have largely been due to the fact that Princeton’s opponents have found a good deal of success at the plate—the Tigers pitching staff has surrendered an average of 7.56 runs per game.

Harvard hopes to capitalize on this opportunity for run production. But in order to do so, Crimson batters will need to take a more disciplined approach at the plate and drive runners home when they are in scoring position.

This is something that the team has struggled with at times this season. Of the 206 times that Harvard batters have reached base safely this season, the team has only come through with runs in 53 of those instances.

One player who has shown that he can produce offensively for the Crimson is senior utilityman Carlton Bailey. Bailey is first on the team in batting average, hitting at a .323 clip on the year, and he ranks second with seven RBIs this season.

“I’ve really tried to...treat every pitch and every at-bat as the most important of the game,” Bailey said. “It has a lot to do with the mental approach. You have to go up there knowing you’re going to get on base.”

“I think offensively, we can be a ton better than we’ve shown,” Decker said. “The key for us is getting the guys at the top and bottom on base and seeing how we can manufacture runs with guys three through seven.”

Princeton hopes to counter with an offensive attack of its own, as Tigers batters have shown throughout the nonconference portion of their schedule that they can drive the ball effectively.

Facing this lineup from the pitcher’s mound will likely be the Crimson’s sophomore righty Sean Poppen. Poppen enters this weekend’s competition with a 2-1 record and an impressive 1.44 ERA over 25 innings pitched. Freshman righty Nick Gruener, who averages nearly seven strikeouts every nine innings, is also likely to take the hill for the Crimson.

Saturday’s doubleheader comes at an important point in the season for both teams as they prepare to face more Ivy League opponents later in the season. After playing Harvard, the Tigers will have six conference games against Dartmouth, Brown, and Yale in the span of eight days.

Over that same stretch, the Crimson will face off against Cornell on the road this Sunday before returning to Cambridge next weekend to take on Penn and Columbia.

“We’d like to come out in this first [conference] game and really show what we’ve been working toward all season,” Bailey said. “We’re out to set the tone early and let everyone know that we’re not messing around this year.”