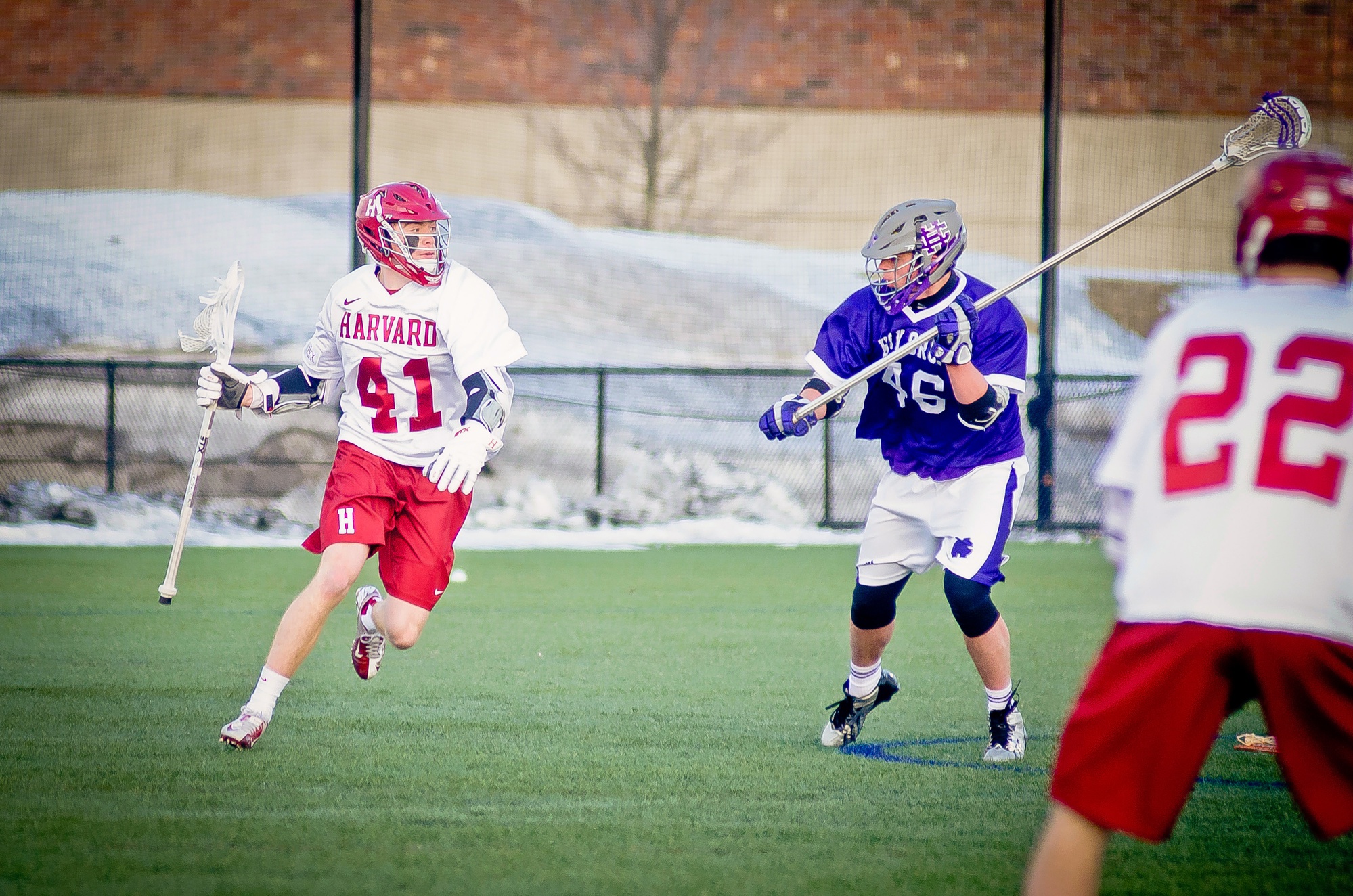 Coming off a 14-8 loss at Albany Saturday, the Harvard men’s lacrosse team was looking to rebound with a home win Tuesday afternoon. Hosting Quinnipiac (1-2) in a non-conference contest, the Crimson (2-2) struggled in the first two periods, but turned it around in the second half to escape with a 10-8 win at Soldiers Field Lacrosse Stadium.

For much of the first half, Harvard failed to execute on either side of the field. The Crimson scored the first three goals of the game in a span of three minutes, but then completely stalled, giving up five straight goals.

“I was disappointed in the way that we started,” Harvard coach Chris Wojcik ’96 said. “I thought we came out looking pretty lackluster, turning the ball over and [were] not fully focused.”

The game started with neither team able to launch a successful offense. The Bobcats dominated the possession battle early, but were unable to capitalize on any opportunities, largely due to several key saves by Crimson junior goaltender Jake Gambitsky.

“We weren’t sharp and struggled to execute at the beginning,” Wojcik said. “We didn’t seem to be completely dialed in at the start.”

With less than seven minutes left in the first quarter, a Harvard attackman was able to draw two defenders before wheeling it around the offense and eventually into the hands of sophomore Deke Burns, who scored from the left side of the goal.

Sophomore midfielder Sean Mahon and senior attackman Carl Zimmerman quickly added scores of their own to give the Crimson a 3-0 advantage. But the  lead would be short-lived, as Quinnipiac netted one to cut the deficit before the end of the first period, then added four straight goals in the second period to go up, 5-3.

“We could have pushed a little harder in the first half,” Gambitsky said. “We didn’t play well and that cost us early.”

The Bobcats took advantage of on a costly series of Harvard penalties. Consecutive violations were committed by Crimson defensemen for slashing and cross-checking to the head, giving the Bobcats a two-man-up opportunity.

Quinnipiac capitalized within 30 seconds on the 6-on-4 play with a score by junior attackman Michael Sagl to put the Bobcats ahead, 4-3. Just two minutes later, Sean McDonagh was called for a slashing penalty, leading to another Quinnipiac goal.

“We want to stay out of the box,” Wojcik said. “But those were hard plays. We’re going to do what it takes to defend our goal, and as long as the penalties are hard but disciplined, we will do what it takes.”

But the Crimson converted on man-advantages of its own. With four minutes left in the half, a Bobcat violation for an illegal stick put Harvard a man-up for three minutes. Schwartz drove a blistering 12-yard shot from the center of the box, cutting the deficit to 5-4 before the end of the first half.

“Adjustments were made at halftime,” Gambitsky said. “We realized that we had played pretty badly in the first half but that personnel-wise, after we were able to feel out what was going on, we were able to tell more clearly what to do.”

In the second half, Harvard looked like a different team. After giving up six turnovers in each of the first two quarters, the team limited itself to only seven for the remainder of the game.

“We made some adjustments and really came out flying in the second half,” Wojcik said. “I wasn’t happy that we couldn’t separate, but at the end of the day, I’m just happy with the team’s ability to find a way to win the game.”

Opening the third period, sophomore midfielder Brendan Newman drove down the side of the defense and drew a defenseman before passing to a wide-open senior midfielder, Daniel Eipp, who then leveled the score at 5-5.

Following another Qunnipiac penalty, sophomore attackman Will Walker drove around the goal after receiving a pass from senior Garett Cambell and nailed the back of the net, giving the Crimson the 6-5 lead.

But the Bobcats never went away. Less than thirty seconds later, sophomore Ryan Keenan caught the ball on the crease for an easy goal to tie the game back up.

Harvard went ahead, 8-6, with nets by Mahon and Campbell, but Quinnipiac cut it to one heading into the final period of play.

With the game still closely contested, Harvard sophomore defenseman Stephen Jahelka, on what looked like a failed clear, threw the ball as far as he could towards the offensive end.

Sophomore attackman Ian Ardrey beat his defender in a foot race to chase the ball down, poked the ball as if it was a hockey puck past the incoming goalie and into the corner of the field, then scooped it up and found senior midfielder Pat Fiorvanti on the crease for an easy score.

“That was a really big goal for us,” Wojcik said. ”I think that was the one that really took the momentum and gave us control of the game.”

Quinnipiac responded with a goal of its own, but a net by Harvard with less than four minutes left sealed the 10-8 victory.

“We fought hard, but we need to improve on consistency,” Schwartz said. “We’ve had quarters that have been awesome, but we’ve had some that haven’t. We need to play a complete 60 minutes, and that’s what we’re striving for going forward.”