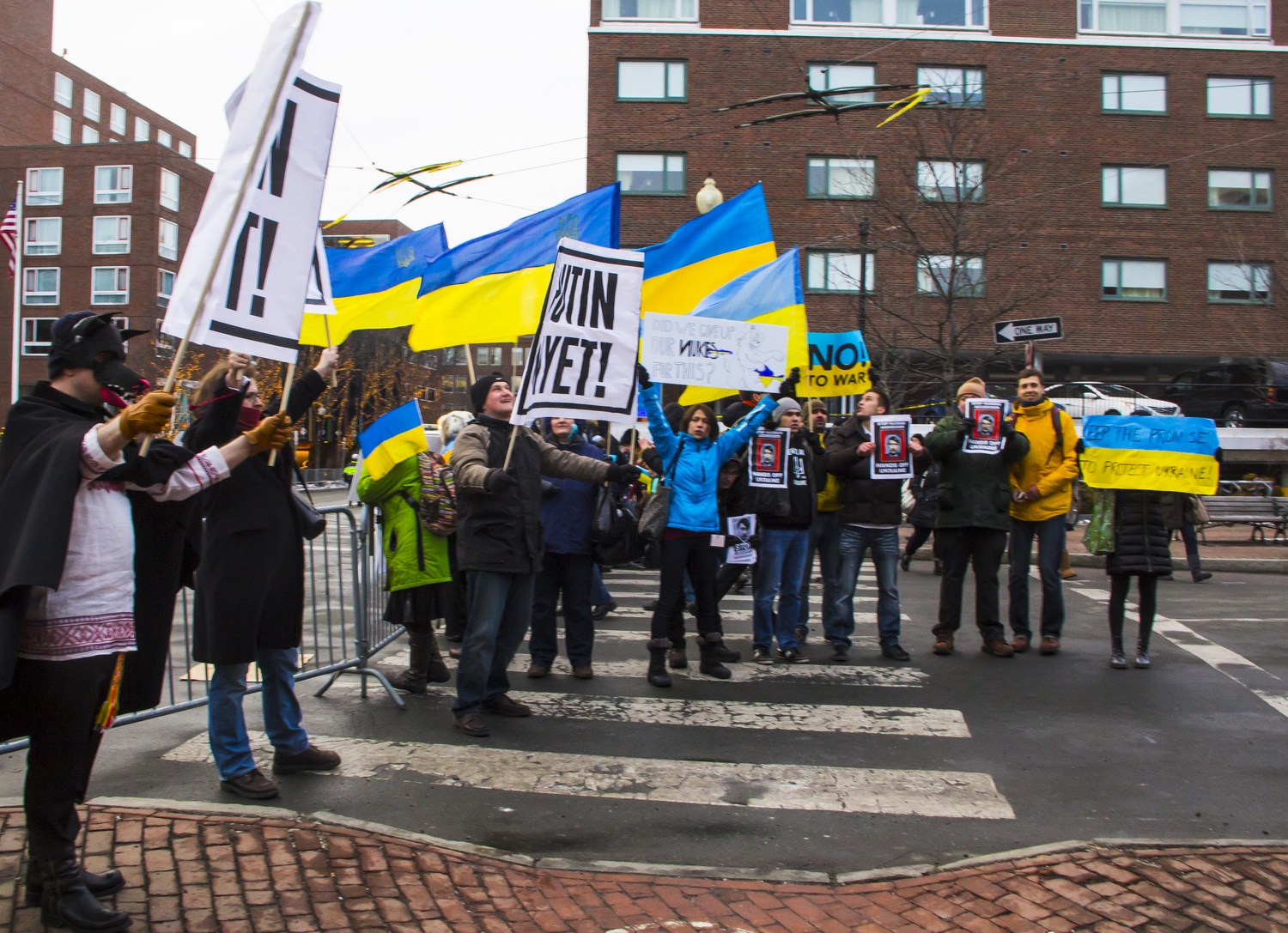 Protesters gather in front of the Charles Hotel Wednesday, March 5, to call on the U.S. to take a more aggressive stance against the Russian presence in the Crimean region. President Obama arrived in Cambridge during the afternoon to raise money for the Democratic National Committee. By Zorigoo Tugsbayar
By Conor J. Reilley and Zohra D. Yaqhubi, Crimson Staff Writers

President Barack Obama attended a roundtable discussion with Democratic Party supporters Wednesday afternoon at the Charles Hotel, where he was met by demonstrators from the Harvard Ukrainian Students Association and the Harvard Global Health and AIDS Coalition.

Supporters of Russian occupation in Crimea made a brief appearance, as well, but had no organized rally.

Both groups of active demonstrators have recently been affected by White House action.

Ukrainian students said they were rallying behind the administrationafter Secretary of State John Kerry used what some consider pro-Ukrainian rhetoric during an appearance at the U.S. embassy in Kiev.

AIDS awareness groups, on the other hand, were angered yesturday by the release of the fiscal year 2015 federal budget, which alls for a $400 million cut in funding to the President’s Emergency Plan for Aids Relief. 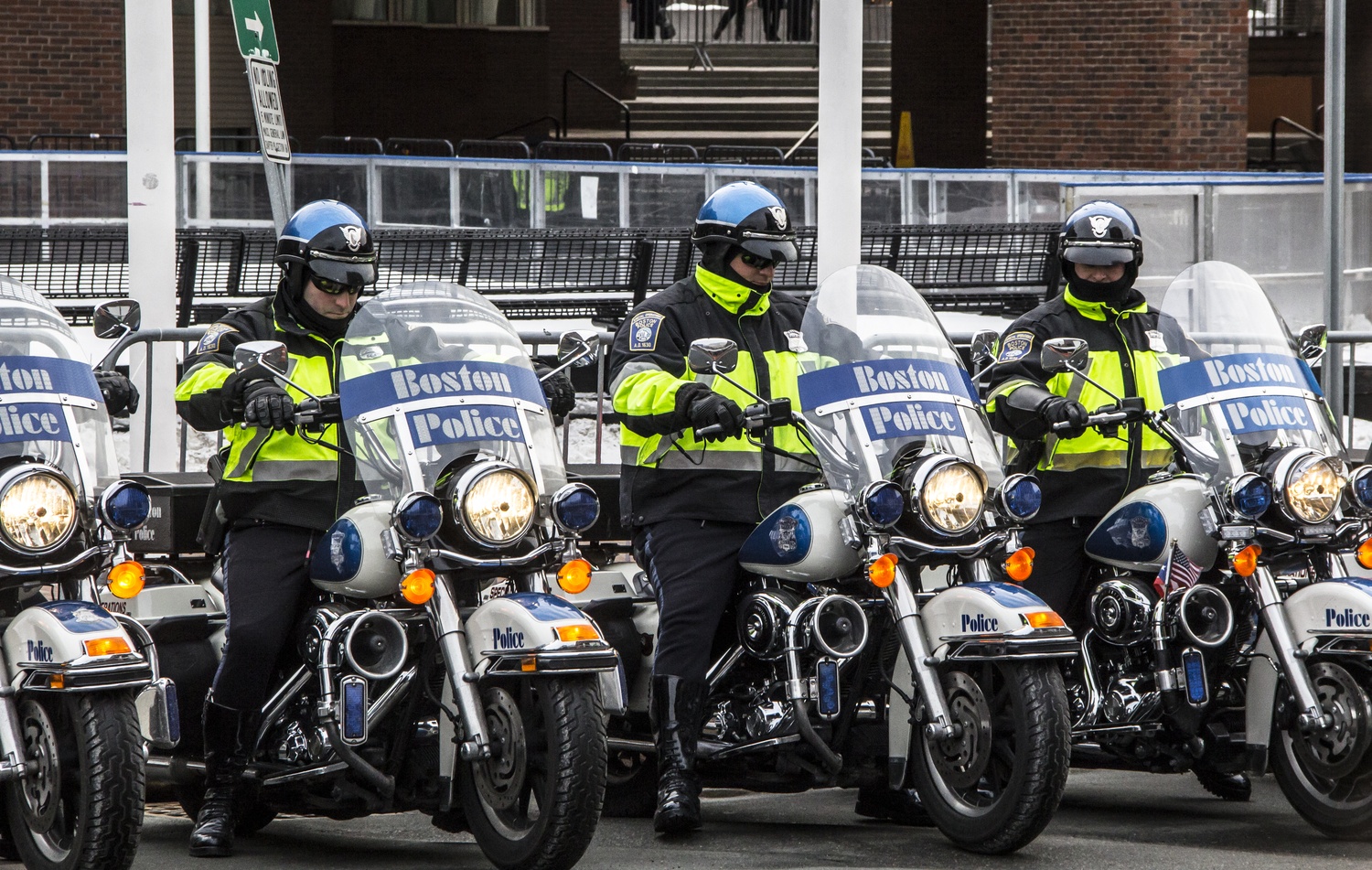 Police offers line up in front of the Charles Hotel as President Obama attends a fundraiser. By Zorigoo Tugsbayar

Obama’s meeting was closed to the public, keeping protestors on the streets surrounding the Charles Hotel.

The President, a 1991 graduate of Harvard Law School, left promptly after the event ended to deliver an address and take questions at a private Democratic National Committee meeting at the Artists for Humanity EpiCenter in the Seaport District. Obama, who arrived at the Charles Hotel just before 5 p.m., had arrived at his second event soon after 6:30 p.m.

Streets were closed off to vehicles around the John F. Kennedy School of Government from 4 p.m. to 6:30 p.m. because of the Presidential motorcade.

Oleh Kotsyuba, a Ph.D. candidate in Slavic languages and literatures and online editor of a Ukrainian intellectual journal called Krytyka, was at the rally with members of the Harvard Ukrainian Students Association. He expressed gratitude for the Obama administration's support of a free Ukraine.

“We also want to emphasize sanctions for Putin to prevent war in Ukraine,” he said. “Many of us have families in Southern Ukraine. We are extremely worried it will come to bloodshed.”

The Ukrainian demonstration was organized by The Ukraine Group of Boston, and was the seventh rally organized in the area in response to Russia’s invasion of Crimea.

“This is the least we can do for our brothers and sisters in the Ukraine” said rally organizer Ilya Timtchenko.

Both groups found out late last night that the President would be visiting Cambridge, and quickly organized demonstrations to be held across from the Charles Hotel.

Ukrainian flags were distributed throughout the crowd and protesters chanted phrases that included “Pressure on Putin” and ”Slava Ukraine! Heroyam Slava!” which translates to “Glory to Ukraine! Glory to Heroes!”

“We threw some signs together, recycled some old ones, grabbed some bed sheets, and made this happen,” GHAC member Eudora Olsen ’17 said. “[AIDS has] sort of fallen off the radar and we’re trying to bring attention back to it.”

As the founding chapter of the Student Global Aids Campaign, GHAC is among the most active branches it the organization nationwide. It recently organized a walkout against House Majority Leader Eric Cantor in response to his refusal to fund a syringe exchange program.

Yet, according to GHAC member India Perez-Urbano ’16, Wednesday was a particularly opportune moment to hold a demonstration.

“We don’t get many opportunities like this,” Perez-Urbano said. “We just want [Obama] to see our message.”

Amirah Sequeira, the national coordinator for the Student Global Aids Campaign who attended the rally, also called for Obama to return to supporting an AIDS free generation.

“Today’s demonstration is focused on the President’s budget cuts that were released yesterday,” Sequeira said. “The number of people receiving treatment around the world is going to greatly decrease. It affects millions.”